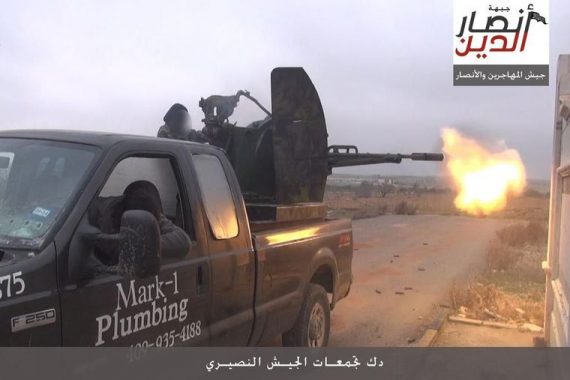 A truck that used to belong to a small Texas plumbing company has been spotted in Syria in the hands of anti-Assad Islamist:

TEXAS CITY — A local plumber is being flooded with phone calls — and some threats — after a picture of one of his old company vehicles being used by Islamist militants in Syria was posted on Twitter.

The picture was posted online by the Islamic extremist brigade Ansar al-Deen Front, according to a CBS News report. It shows a black pick-up truck with a Mark-1 Plumbing decal on the door and an anti-aircraft gun in the bed.

Mark Oberholtzer, who has owned and operated Mark-1 Plumbing in Texas City for the past 32 years, confirmed it was his pickup truck in the picture. He said he no longer owned the vehicle and had no idea how it ended up in Syria.

Oberholtzer said he traded in the truck to an AutoNation dealership three years ago. He usually takes the decals off his vehicles when he sells them but he left it on this truck with the expectation that AutoNation would remove it.

“They were supposed to have done it and it looks like they didn’t do it,” Oberholtzer said. “How it ended up in Syria, I’ll never know.”

It’s not unusual for some used cars from the United States to end up in the overseas market, but this one is certainly something of a puzzle. Whether or not it indicates something nefarious — not on the part of the plumbing company or the auto dealer, of course, but on the part of whomever the car ends up being sold to before it goes overseas — would be purely speculative at this point but it certainly is odd.

In the meantime, I’m sure Oberholtzer will be remembering to remove those stickers himself from now on.