The Oval Office Address, once a common tool of the Presidency, has been in declining use of late. 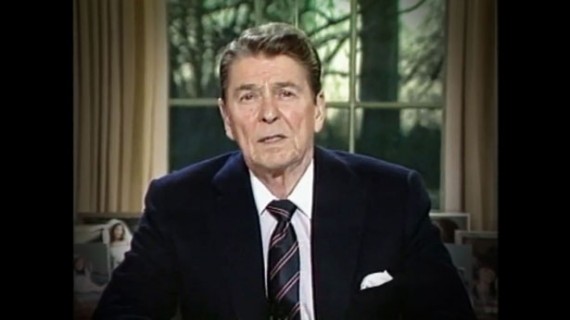 The New York Times takes note that something that used to be a political staple of the American Presidency isn’t nearly as common as it used to be:

WASHINGTON — At historic moments in the television age, past American presidents turned to the Oval Office as their stage.

Dwight D. Eisenhower and John F. Kennedy interrupted prime-time shows to tell Americans from the Oval Office why they had ordered troops to desegregate schools. Bill Clinton broke into programming from behind the presidential desk three times in a month to explain military actions in Haiti and Iraq. Ronald Reagan, the telegenic former actor, set the record for evening addresses from the Oval Office desk: 29 over two terms.

Even the untelegenic Richard M. Nixon spoke 22 times from the Oval Office in just five years, the last time to resign in disgrace.

The current president? It was three years ago this summer that Mr. Obama gave his only two prime-time addresses from the Oval Office — the first on the oil spill in the Gulf of Mexico, the second on ending combat operations in Iraq.

That ties the number for George W. Bush at a similar point in his presidency. After Mr. Bush’s first Oval Office address, on Sept. 11, 2001, he gave just five more in eight years. The statistics come from the American Presidency Project at the University of California, Santa Barbara.

“I wouldn’t say the Oval Office address is a thing of the past,” said Martha Joynt Kumar, a presidency scholar at Towson University in Maryland. “It’s just going to be reserved for those presidents and those occasions where they feel they have to use it.”

That is a sign of the times. In the second half of the 20th century, word that the president would address the nation made Americans stop and listen. For many baby boomers in particular, the speeches define the historical timeline of their lives.

But in this century, the Internet revolution and advances in television technology have changed presidents, citizens and the broadcasters who traditionally connected the two.

Instead of just three TV networks, Americans have myriad choices for entertainment and information, and viewership numbers for prime-time presidential addresses have fallen, to about 25 million. Faced with new competition, broadcasters resist giving airtime to presidents, so presidents give fewer addresses (and evening news conferences). When they do want to speak, they increasingly choose arrangements more comfortable to them than sitting at a desk staring at a lens — a setup that Mr. Obama, known for his oratorical skills, likes no more than Mr. Bush did.

“I think it’s an odd format, and it makes him seem a little more stilted than he is, compared to standing before a crowd or in an interview,” said Jon Favreau, a former speechwriter for Mr. Obama. “If someone convinces him that it makes sense, he’ll do it. But I don’t think it’s his favorite venue.”

Even some supporters argue that a formal Oval Office address makes sense now because it would allow Mr. Obama to better address criticism of his health care law and the surveillance programs of the National Security Agency.

Among the proponents is a former spokesman for Mr. Obama, Robert Gibbs. “When the president speaks from the office that he occupies, and where he sits to make some of the biggest, most important decisions in our country, I think it’s a piece of real estate that fits what you’re trying to talk about and the decisions that you’re trying to grapple with,” Mr. Gibbs said. “It would be a perfect place for an N.S.A. address.”

Yet when a reporter floated the idea on Twitter, Mr. Obama’s senior strategist, Dan Pfeiffer, called it “an argument from the ’80s” — when Reagan could draw tens of millions of viewers because three networks dominated the airwaves, cable TV was limited, and the Internet was not yet in wide use.

That’s not to say that the practice of President’s addressing the press, and the nation, has gone away. However, instead of using the Oval Office both President Obama and his predecessor have preferred other settings:

Mr. Obama, like Mr. Bush on occasion, has come to prefer the more dramatic staging of striding down the White House’s red-carpeted Cross Hall, then coming to a stop to speak, standing, at the stately East Room entry. He did that three times in 2011, speaking about Osama bin Laden’s killing, plans to leave Afghanistan and a debt-limit crisis.

“Aesthetically, the walk down the Cross Hall is a very powerful thing,” Mr. Pfeiffer said.

Both Mr. Obama and Mr. Bush also took to traveling to places pertinent to their messages, and perhaps more vivid to networks and viewers. Mr. Obama unveiled his Afghanistan policy to an audience of cadets at the United States Military Academy at West Point, for example. Mr. Bush addressed Hurricane Katrina from Jackson Square in New Orleans, where his speech was made possible by generators and communications equipment supplied by the White House.

For decades, technology did not allow such versatility. So both baby boomers and their children grew up with the familiar Oval Office shot.

In other words, addresses that may have been delivered via the Oval Office in the past simply because of the fact that technology didn’t allow for effective use of remote locations are now being delivered in other venues. Additionally, there are other venues in the White House that President’s have come to use depending on the subject of their address, such as the East Room and, many times, the White House Press Briefing Room if the President wishes to make remarks during the course of the day rather than in a Prime Time address. There may still be occasions where an Oval Office Address is appropriate, of course. The picture above, for example, was taken the night President Reagan delivered his speech regarding the Challenger Disaster. For that occasion, the Oval Office was clearly the appropriate venue. For pure policy based speeches, though, it seems as though the future lies in the “road trip” speeches that President Obama has come to favor in recent years. I suspect we’ll see a lot more of those from future Presidents, and a lot fewer addresses from the most famous office in the land.