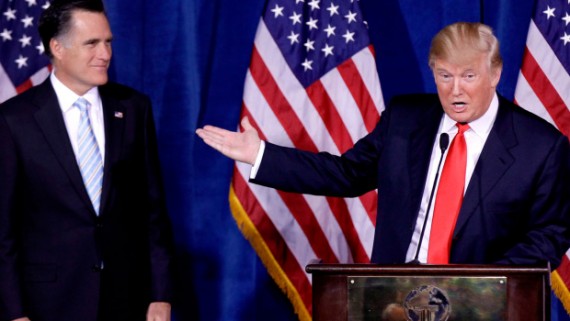 If you thought that Clint Eastwood’s monologue to an empty chair at the Republican National Convention was bizarre, there was almost an appearance at the RNC that would have likely made Eastwood seem positively Shakespearean by comparison:

Real-estate mogul Donald Trump said Friday night that Mitt Romney’s team asked him to appear in a “commercial” for the campaign last year-but it never saw the light of day.

The video, he said, was supposed to run during the Republican National Convention and featured Trump sitting in his office with an actor who looked like President Obama. After telling the faux president “what a lousy job” he’s done, Trump said, he delivered his famous line to the actor: “You’re fired!”

Speaking at a conservative gathering in Washington, Trump boasted that Romney’s team loved the video yet never used it because it was “too controversial.”

The multimillionaire said he felt “slighted” that Romney’s staff stopped calling after the primary, so he was pleasantly surprised to get the phone call about filming a “great commercial.”

“The concept was (the actor) was sitting at my desk, and I was on the other side of the desk. And I was telling him what a lousy job he’s done. You’re doing bad here. You’re doing bad there. You don’t know what you’re doing,” he said. “(then) I say ‘President Obama, you’re fired!'”

“I think it would have brought down the house,” he added, offering high praise of the video.

If by “crashing down in an utterly absurd disaster,” I’d agree. If nothing else, this does seem to demonstrate that Romney’s campaign team was capable of making sane decisions from time to time. Running that video would have turned the entire convention into a massive joke.