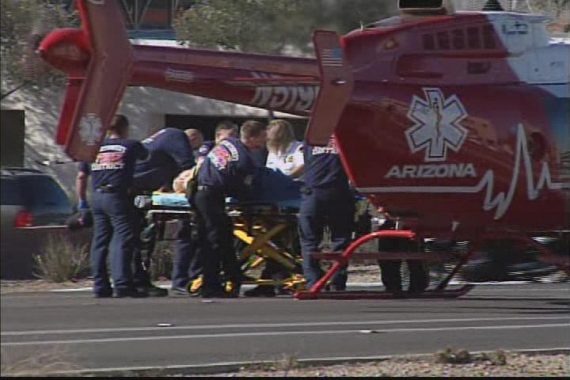 It’s somewhat appropriate that, on the same day that Jared Lee Loughner was found mentally incompetent to stand trial, The New York Times would run this story:

TUCSON — Television images of the chaotic scene after the Jan. 8 shootings here do not convince them. Neither do the funerals for the deceased, the scars of the wounded or the federal prosecution of the man accused of being the gunman.

Some conspiracy Web sites are claiming that the shootings that nearly killed Representative Gabrielle Giffords and did end the lives of a federal judge, a 9-year-old girl and four others never actually took place. One particularly bizarre site, run by a Texas man, says it was all a government hoax that used actors.

Such obviously fantastic claims would usually not merit the attention of law enforcement, but they have in this instance because some believers have been confronting, and alarming, some of the people associated with the case in recent weeks.

Richard Kastigar, investigative chief of the Pima County Sheriff’s Department, said he passed information about the Web site to his intelligence unit. He reacted angrily to those denying the shootings. “There were bodies sent to the morgue, people’s loved ones,” Mr. Kastigar said.

Manuel J. Johnson, a spokesman for the F.B.I., said the bureau was aware of the site, but he declined to say whether an investigation was under way. One shooting victim said he notified the F.B.I. recently after two men showed up at his Tucson home claiming to be investigators and saying they were trying to determine whether the shooting was a hoax.

“They tried to get into my home,” said the victim, who asked that he not be identified because it might attract more such visitors. “They wanted to know if I had any pictures. They said they didn’t believe the event took place.”

The victim said that when he pressed the visitors for identification, one of them presented a business card that listed the Texas conspiracy site, which describes the shooting as an exercise conducted by the Department of Homeland Security. Other people connected to the case, including hospital personnel, victims’ relatives and possible trial witnesses, have received similar visits or seen their images on the Web site, officials said.

The site, which solicits donations from visitors to help with its “investigation,” shows pictures of people who appeared on television after the shooting — including the suspect, Jared L. Loughner — and claims they resemble photographs of Tucson-area actors found on the Internet.

“We are only trying to uncover the truth and give the information to the Citizens,” the site says. “We would love nothing more than to debunk our own theory.”

What evidence would convince these people? A dead body? A piece of Gabrielle Giffords skull? The videotape of the shooting (scratch that, the videotape would obviously feature the aforementioned actors, wouldn’t it)?

What this proves, of course, is that people will believe anything. We’ve had 9/11 Truthers, Birthers, Transcripters, Deathers. And, now, what shall we call these people? Personally, I would choose idiots but I guess that’s overly inclusive. So, I am open to suggestions.