Neil Irwin at The Washington Post shares this chart: 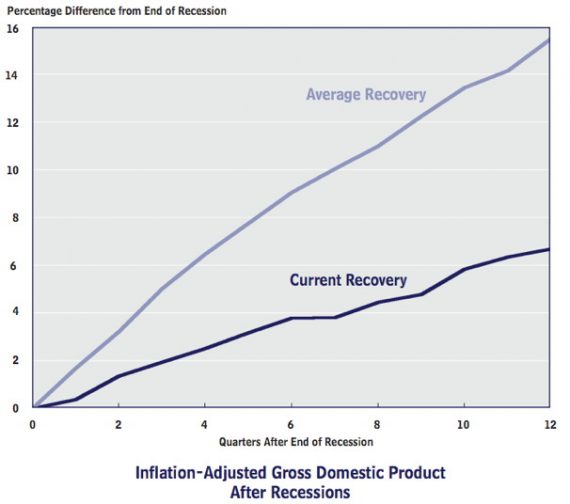 The chart comes from a new study from the Congressional Budget Office, and leads Irwin to comment:

In other words, you’re not imagining it: This economic recovery has been a big disappointment relative to what the United States has usually experienced after a recession. Growth has been 9 percent below what was seen in past recoveries on average in its first three years. The CBO report tries to disentangle where that underperformance is coming from and its answer is deeply unsettling: The U.S. economy just isn’t as good at growing as it used to be.

The new CBO report claims that two-thirds of the underperformance of the economy over the past three years compared to a typical recovery is due to a slower rate of growth in potential GDP. Only one-third, in this analysis, is due to factors related to this recession.

Potential GDP is the measure of what the economy is capable of producing if almost all of the people who want jobs are able to get one and almost all its machines and buildings were humming at their potential. While it has grown consistently through modern U.S. history (we can thank a growing population and steadily improving technology for that), it doesn’t always grow at the same rate. In periods when baby boomers were reaching their working years and women were entering the workforce in large numbers, the rate at which potential GDP rose was very high, over 4 percent at times, by the CBO’s reckoning.

In recent years, though, those trends have reversed. Baby boomers are starting to retire and the proportion of women who work has leveled off. The CBO’s estimate of potential GDP was rising at gradually steady rates for most of the 2000s even before the great recession hit, and has continued that downward trend since then.

So part of what is showing up in the CBO’s analysis of how this recovery has proceeded since 2009 reflects the simple fact that earlier post-war recoveries took place in times when potential GDP was growing faster. “Although some of the sluggishness of potential GDP since the end of the last recession can be traced to unusual factors in the current business cycle, much of it is the result of longterm trends unrelated to the cycle, including the nation’s changing demographics,” the study said.

What this suggests to me is that we’re not likely to see a return to the type of economy we saw before the recession for quite some time. At the very least, we’re unproducing based on Potential GDP by nearly a trillion dollars a year, and until we’re able to overcome that gap, we’re likely to see quarter after quarter where GDP growth stays within a range that goes no higher than somewhere in the neighborhood of 2.0%. Good, better than negative growth, but certainly not the sign of a healthy, recovering, economy.