SpaceX's Dragon has shown us what the future can look like. 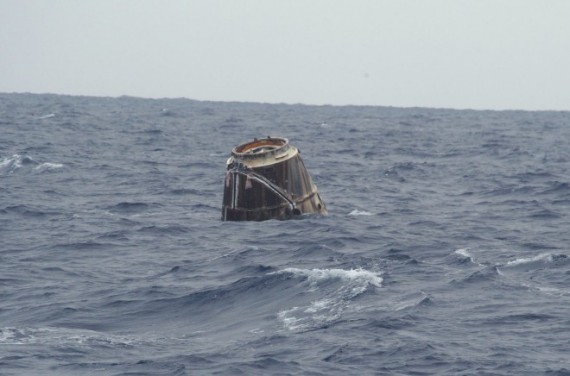 The first private space flight to the International Space Station has ended with a successful splashdown in the Pacific Ocean.

Musk was clearly elated by the successful reentry and splashdown, saying that when you know how complex the spacecraft is inside and out, you know everything that can go wrong. When the mission ends in success, there’s the one simple thought going through your head: “Wow, OK, it didn’t fail.”

The former internet entrepreneur said he wasn’t pessimistic or expecting failure, but he knew how much potential there was for things to go wrong. Instead, the demonstration mission for NASA went very well with a few hiccups, but nothing that wasn’t fixed by the SpaceX team. NASA’s Alan Lindenmoyer shared Musk’s approval, saying the mission appears to be a “100 percent success,” but did add there are still a few more things to check. “We’re going to have to see the cargo.”

In the end the SpaceX mission lasted 9 days, 7 hours and 58 minutes from launch to splashdown.

Elon Musk said the Dragon performed very well, exceeding expectations on some fronts, including solar panels that produced more power than expected. There were a few problems during the mission, starting with an aborted first launch attempt as the Falcon 9-s rocket engines were starting. A problem with the Dragon’s laser range-finding device that caused some unplanned maneuvers during the approach to the station was also fixed, according to Musk. He says the device was checked as Dragon moved away from the ISS this morning, and appeared to be working well.

With the success of the demonstration mission, SpaceX now needs the official confirmation from NASA, and then it will begin fulfilling cargo resupply missions to the ISS later this year. The company has a contract for 12 cargo missions while it continues to develop the manned version of Dragon for flying astronauts to the ISS and elsewhere in low Earth orbit.

Rand Simberg discusses the implications of this successful launch, and argues that we are entering a new era in space:

[I]t means that NASA now has a vehicle capable of serving as a lifeboat at the ISS in the event of an emergency necessitating the evacuation of the station, and need no longer rely on the Russians for this service. While it doesn’t have a full life-support system (yet) it does have a pressurized cabin, and in an emergency people could return in it with nothing but scuba tanks for the short duration of the departure and entry. Moreover, it can in theory support the return of seven crew members, and not just three as the Soyuz does. That means that the station crew size could be expanded without having additional safety concerns. Beyond that, if a Soyuz and Dragon were docked at the same time, it means that there is a functional “ambulance” capability — a sick or injured astronaut could be returned to earth without having to abandon the station.

[I]t means that, were the Russians to have problems similar to those they experienced last fall, when they had multiple launch failures and couldn’t get to the ISS, NASA now has a way to get to the station in an emergency. While the Dragon doesn’t yet have a launch abort system (this is one of the items being developed as part of the commercial crew activities), it would be preferable to endure the higher risk of a loss of crew without one, than to abandon the hundred-billion-dollar ISS, as they actually contemplated last year. I haven’t polled them, but I’ll bet that, after this week’s flight, and the first two Falcon 9 missions, most if not all of the astronauts at NASA would be willing to take a ride in it right now, abort system or no, if it were an important mission. Their job is to fly in space, and they’re presumably willing to risk their lives to do so, as long as they understand the risk (as they didn’t really with the shuttle).

Bottom line, in terms of our ability to get the job done if it’s important, America has returned to space. The dreaded “gap” caused by the shuttle retirement didn’t even last a year, thanks to the foresight of the previous administration and the vision of an entrepreneur.  Now it’s up to Congress to fully fund the request for commercial crew to enable the rapid development of even safer and competitive systems.

Several times over the less-than-a-year that has elapsed since the final flight of Atlantis, [see here, here, and here] I have written about this rather silly idea that this temporary pause in the United States Government’s manned space flight program means that America has abandoned space, or that we’ve somehow taken a step back from “national greatness,” as Charles Krauthammer argued back in April. As I noted in response to Krauthammer, though, the vision he had is a vision of the past:

While Atlantis was engaged in its final mission in July,  an unmanned probe calledDawn had entered orbit around an asteroid named Vesta on a mission that would last several years and eventually include a stop at Ceres, a minor planet in the Asteroid Belt. As I noted at the time, this wasn’t the only active, or planned, American space mission:

Dawn isn’t the only NASA mission that will be launched in the coming years. In August, Juno will be launched on a mission to Jupiter with an expected arrival date in August 2016. Later in the year, the Mars Science Laboratory, which includes a new Mars Rover named Curiosity,  will head toward the red planet with an expected arrival date in August 2012 and is expected to operate for at least one Martian year (slightly under two Earth years). In February 2012, the Nuclear Spectroscopic Telescope Array a space-based X-ray telescope, will be launched as part of the continuing mission to explore deep space and the origins of the universe. Sometime in 2017-2018, the James Webb Space Telescope, a space-based infrared telescope intended to replace the Hubble Space Telescope, will be launched and begin its mission.  While this is going on, private entities likeSpace-X will be developing the commercial side of orbital launch vehicles, and NASA will be working on what is currently referred to as the Shuttle-Derived Heavy Lift Launch Vehicle, a next-generation heavy-lift rocket designed to get manned American spacecraft into orbit, and beyond. In the meantime three U.S. launched probes — Pioneer 10,Voyager 1 andVoyager 2 — have left the confines of the Solar System for the vast unknown beyond.

And, now we have the success of SpaceX and the beginning of an entirely new industry. That doesn’t sound like a nation in decline to me, it sounds like a nation that’s moving on to the new frontier.

SpaceX isn’t the only company out there trying to get into the space business. Billionaire Richard Branson continues to develop his Virgin Galactic project, which has as its ultimate goal the establishment of a passenger service that would give people the opportunity to orbit the Earth on their own. Indeed, there is now an entire worldwide burgeoning industry of companies devoted to commercial space flight and/or private companies that would act as contractors for government space agencies. Indeed, the day may come when NASA and the ESA will find themselves having to compete with private industry for the very best engineers. And we’ll all be better off for it.