The Vote Could Be As Much As Two Years Away, But Support For A ‘Brexit’ Seems To Be Growing

A vote is still as much as two years away, and support for staying in the E.U. still has the most support, but support for the idea of a British exit from the European Union has grown in the past several months.

A new poll finds that a majority of Brits favors leaving the European Union, a result that is likely to put even further pressure on Prime Minister to schedule a “Brexit” vote for some time in the near future:

A majority of the public now favours leaving the European Union, according to a poll.

Research by ORB for The Independent found 52 per cent wanted to see so-called “Brexit”, compared to 48% who backed staying in.

It is the first time the survey has recorded a majority for quitting.

In June, July and September, 55 per cent supported remaining inside the union, while last month the margin narrowed slightly to 53 per cent-47 per cent.

Meanwhile, one of the two anti-European Union referendum campaigns has started merger talks aimed at creating a single campaign ahead of the in/out vote on Britain’s EU membership.

The talks were initiated late last week by Arron Banks, the millionaire founder of the Leave.EU campaign, in a letter to Matthew Elliott, the campaign director of the Vote Leave campaign.

Given the fact that previous polling on this issue had shown the numbers to be almost completely reversed even as near as two months ago should be reason to take this particular poll with something of a grain of salt. Added into that warning is the fact that polling in advance of May’s British elections was significantly off from where the final results ended up being. That being said, the promise that the British people would have the opportunity to weigh in on the United Kingdom’s future was a part of the Conservative Party’s platform leading up to that election, in no small part in response to some of the populist fervor that had led to the rise of groups like the UK Independence Party as well as general British frustration with European policies that seemed out of tune with the political direction the nation wanted to take. So, for better or worse, there will be a referendum at some point before the end of 2017.  In that regard, it’s worth noting that opinion polling on this issue may not be very useful in determining the ultimately fate of this issue since many Brits are likely not paying much attention to the issue. Once there’s a date set and the campaign begins in earnest, voters are likely to become much more focused on the debate. Moreover, as we saw in the lead up to the Scottish referendum, and as we often see on referendum questions here in the United States, public opinion on ballot questions that are controversial and the subject of high-profile campaigns often fluctuates wildly before the matter is settled at the ballot box.

Looking beyond this one poll, The Monkey Cage blog looks at polling on the issue going back to May and finds that, while polling still indicates support for staying in the E.U. among Britons, support for the idea of a “Brexit” is growing:

For this estimate, we examine polls beginning in May, when the wording of the referendum question was first announced, up until the start of November. (The government accepted a recommendation from the Electoral Commission that wording needed to be changed in September). We look at the unadjusted responses, which means we include undecided voters, in part because we cannot be sure of how those undecideds will eventually break.

Over the past six months, there has been a steady rise in support for leaving, from around 33 percent to 38 percent. At the same time, support for remaining first increased slightly, reaching approximately 56 percent, but then fell sharply in August to below 48 percent. This collapse in support coincided with the European refugee crisis.

The steady rise in support for Brexit, in the face of both upward and downward shifts in support for remaining, suggests that the leave campaign has made at least some of its gains by winning over undecideds rather than by converting those who previously wanted to remain in the E.U.

Despite these moves in public opinion over the summer, there is still a ten-point gap between the leave and stay camps, with the plurality (so far) saying they will opt to remain. The polls appear to have stabilized over the last month or so.

This chart demonstrates the trends being referred to quite well: 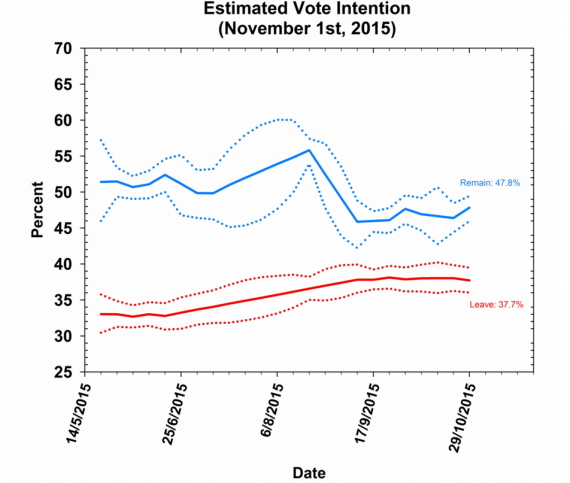 Much like the Scottish referendum last year, the fate of the eventual Brexit referendum will likely depend in no small part on the timing of the vote. To the extent we can accept these new poll results at face value, for example, they may reflect public apprehension over the impact of the E.U.’s open borders policy on national security, as demonstrated by the ability it gave the perpetrators of the Paris attack the ability to move freely, and largely undetected between France, Belgium, and, apparently, Germany as they planned their attack and possible follow-up attacks. As The Monkey Cage notes, there has already been an up-tick in support for leaving the E.U. as the refugee crisis has grown over the past several months has increased. Given this, it’s not inconceivable that at least some of what we’re seeing in this new poll is a reflection of how events such as the refugee crisis and now the Paris attacks have influenced public opinion on the European Union in the United Kingdom. As we’ve seen before, though, public opinion can change greatly over time. So, I wouldn’t necessarily read anything definitive into these numbers, but they should at the very least send a message to a political establishment in the United Kingdom that would obviously prefer to see a “Brexit” referendum fail.