There Is No “Middle” In Congress Anymore

At least on Capitol Hill, the political middle is dead and buried.

Chris Cillizza has taken a look at votes in the House of Representatives and the Senate going all the way back to 1982, and it confirms what we already knew, namely that there is no such thing as a “middle ground” in the Congress of the United States anymore.

For example, here’s the chart showing votes in the House: 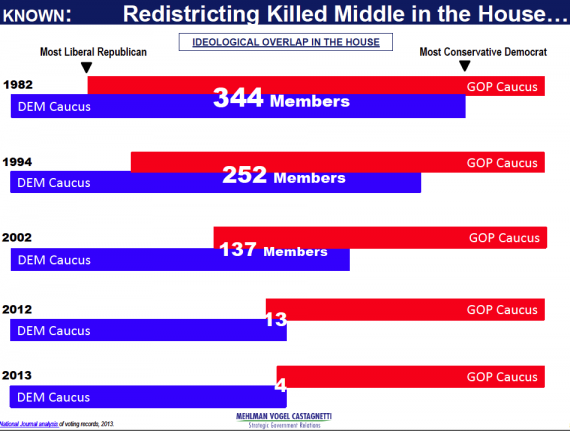 As he explains in the post, Cillizza utilizes the Annual Vote Ratings compiled by National Journal and the chart is meant to show the distance between the most liberal and conservative members of the House. In 1982,there were a total of 344 members of the House that fell within the boundaries of “ideological overlap,” which constitutes a fair approximation of the “middle” of the ideological balance in the House of Representatives. In 2013, there were only four, representing a loss of 70% over the course of 31 years. Cillizza proposes that he most likely explanation for this drastic drop in the membership of the bipartisan middle lies in redistricting, and this seems like a fairly plausible explanation. One can see one example of that in the differences between 2012 and 2013, because it was in 2013 that the first Congress elected pursuant to the redistricting done after the 2010 census took office.

What’s interesting is the fact that we can see basically the same thing happening in the Senate: 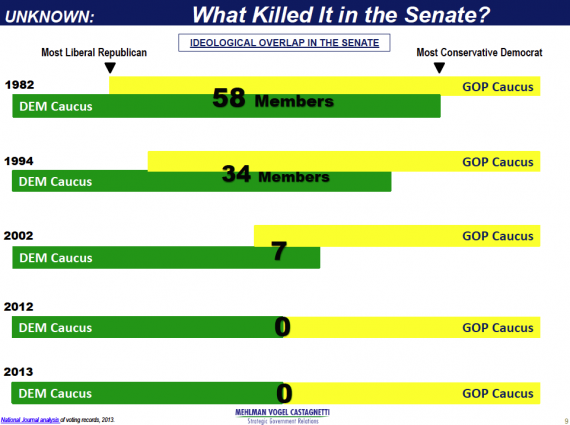 In the course of just over 30 years, we’ve seen the Senate go from a body where “the middle” constituted the majority to one where there is no middle at all. Since the Senate is not subject to the effects of redistricting this suggests that the the disappearance of the political middle is due to more than just the impact of redistricting in the House of Representatives.

Cillizza doesn’t offer any theories of his own in the post for what might explain this phenomenon, but it isn’t too difficult to figure them out.

One factor, of course, is the fact that our political culture has changed significantly since 1982. Back then, the Cold War was still a reality and the nation was more or less united when it came to issues of foreign policy. Additionally, for better or worse by the late 1970s the nation had reached something of an ideological consensus on issues regarding the role of government. Back then, the conservative wing of the Republican Party was a decided minority and it was a Republican President who had been known as a staunch conservative when he first came to Washington, Richard Nixon, who gave the nation such “liberal” ideas such as the Environmental Protection Agency, the Clean Water Act, and vigorous enforcement of school desegregation polices first started twenty years earlier under another Republican President. Ronald Reagan had been elected in 1980, of course, but it was far from apparent at that point just how much his Presidency would transform the Republican Party and the nation. The largest among those changes, of course, was the rise of the conservative wing of the GOP and the steady decline of the Rockefeller wing of the party. The rightward drift of the GOP alone is no doubt at least partly responsible for the fact that there isn’t nearly as much agreement in Congress as there used to be.

Accompanying the rise of the conservative wing of the GOP, of course, has been the rise of alternative sources of information and opinion that simply didn’t exist three decades ago. Talk radio, cable news networks, and the Internet have all contributed to the ability of people to only consult news and opinion sources that reinforce their own beliefs, and this leads them to support candidates that tend to appeal to ideological extremes rather than the consensus held by a political middle. Finally, the fact that there is seemingly no break in the partisan political battles likely also helps encourage ide0logical extremism.

The interesting thing about all of this, of course, is that while the political middle is dead in Congress, it is alive and well in America as a whole. We see this reflected every four years in Presidential contests, where candidates can only win by appealing to that broad swath of voters in the middle because concentrating on ideological extremes is a recipe for failure, Indeed, although Republicans will be loathe to admit it, it’s rather obvious that Barack Obama won in 2008 and 2012 because he was much more appealing to those middle of the road voters than either of his Republican opponents. Given the size of the nation and the manner in which we elect Presidents, it seems unlikely that we’ll ever see anything like an “end of the middle” in Presidential politics. However, it’s hard to see when we might see a return to the middle in the Legislative Branch, and as long as that’s the case it’s hard to see Washington being able to accomplish much of anything.