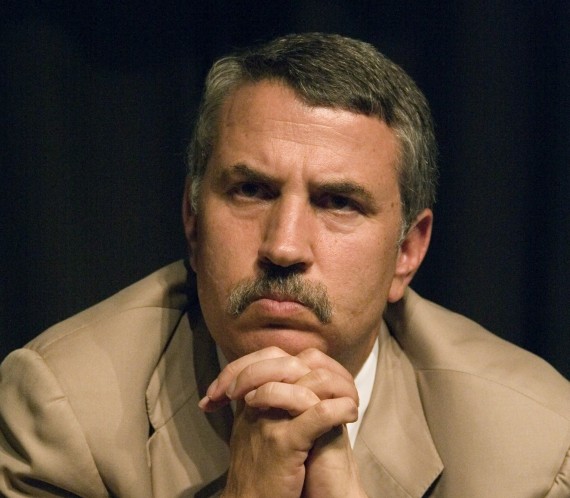 New York Times columnist Thomas Friedman had a bad day the other day and brought his temper tantrum to the Op-Ed pages of nation’s paper of record:

I had to catch a train in Washington last week. The paved street in the traffic circle around Union Station was in such poor condition that I felt as though I was on a roller coaster. I traveled on the Amtrak Acela, our sorry excuse for a fast train, on which I had so many dropped calls on my cellphone that you’d have thought I was on a remote desert island, not traveling from Washington to New York City. When I got back to Union Station, the escalator in the parking garage was broken. Maybe you’ve gotten used to all this and have stopped noticing. I haven’t. Our country needs a renewal.

And that is why I still hope Michael Bloomberg will reconsider running for president as an independent candidate, if only to participate in the presidential debates and give our two-party system the shock it needs.

So let me see if I’ve got this right. Thomas Friedman books a seat on the Acela (average round trip business class fare about $200), didn’t like the condition of the street in front of Union Station, had a couple dropped cell phone calls (cell phone coverage, by the way, not even being something that Amtrak or the government has control over), and then has to use the stairs to get to his car when he gets back to D.C., so now he concludes that the Republic will perish unless the rather unimpressive billionaire Mayor of New York runs for President. It is probably worth pointing out that one of the inconvenience that troubled Friedman’s journey so much was, as David Weigel points out, directly related to a multi-million dollar repair and renovation project currently taking place at Union Station? I thought Tom Friedman was in favor of infrastructure projects. Perhaps that needs to be modified to Tom Friedman is in favor of infrastructure projects that don’t inconvenience him too much.

But, wait, there’s more. Friedman argues that Bloomberg’s greatness is such that he doesn’t even need to win the election:

Bloomberg doesn’t have to win to succeed — or even stay in the race to the very end. Simply by running, participating in the debates and doing respectably in the polls — 15 to 20 percent — he could change the dynamic of the election and, most importantly, the course of the next administration, no matter who heads it. By running on important issues and offering sensible programs for addressing them — and showing that he had the support of the growing number of Americans who describe themselves as independents — he would compel the two candidates to gravitate toward some of his positions as Election Day neared. And, by taking part in the televised debates, he could impose a dose of reality on the election that would otherwise be missing. Congress would have to take note.

It’s ironic that this column should appear today, because it was just yesterday that Atrios, celebrating the 10th anniversary of his blog Eschaton, named Thomas Friedman Wanker of the Decade:

Friedman possesses all of the qualities that make a pundit truly wankerific. He fetishizes a false “centrism” which is basically whatever Tom Friedman likes, imagining the Friedman agenda is both incredibly popular in the country and lacking any support from our current politicians, when in fact the opposite is usually true. Washington worships at the altar of the agenda of false centrism, and people often hate it. Problems abroad, even ones which really have nothing to do with us, should be solved by war, and problems at home should be solved by increasing the suffering of poor and middle class people. Even though one political party is pretty much implementing, or trying to implement, 99.999999% of the Friedman agenda, what we really need is a third party catering precisely to this silent majority of Friedmanites.

Nothing sums this aspect of Friedman’s special brand of “Wankerishness” than his bizarre fascination with the idea that people outside of the New York Times newsroom and the Acela corridor actually think that Michael Bloomberg would make a good President, or that he would garner anything near the 15-20 percent of the vote that Friedman fantasizes about here. This isn’t Perot circa 1992 and 1996 and there’s no reason to believe that the American people have a great longing for a short, sometimes grumpy, billionaire from New York City whose tenure has been characterized largely by things like banning trans-fat from city restaurants. More likely than not, there are large numbers of people who have never really heard of him to begin with, or at least don’t know much of anything about his record. As I’ve made not of before, he may be the Mayor of America’s largest city, but he has a far lower public profile that Ed Koch or Rudy Giuliani did during their time in office.

The more important question is where exactly Bloomberg would be popular enough to have an impact on the election. Does anyone actually think that even the New Yorkers who voted for him three times are going to pick him over Barack Obama> Of course they aren’t. Unless you’re going to create a nation of 300 million Thomas Friedmans (and how annoying would that be?), there’s simply no reason to believe that this idea of an all-knowning East Coast Technocrat in the White House is going to appeal to anyone, even compared to Mitt Romney and Barack Obama.

Expect more of this nonsense from Friedman and his ilk as we get closer to the election. By September, I expect him to be writing columns bemoaning how much better the race would be if we’d just listened to him and if Saint Bloomberg had run. But Bloomberg isn’t going to run and, even if he did, he’d never get anywhere near the level of support that Friedman fantasizes about. So at this point I suggest that Mr. Friedman just plan on writing in his own name in November, because it’s pretty clear that the only person that Thomas Friedman thinks belongs in the White House is Thomas Friedman.

Authors Note: There have been a few stylistic changes made to this post since it was originally published, none of which changed the content.