Remember the border crisis? Yea, it's not much of a crisis these days.

The massive influx of unaccompanied minors from Central America that grabbed the national attention for the better part of the early summer has slowed down significantly:

The rush of unaccompanied children crossing the U.S.-Mexico border slowed in September to the lowest number of monthly apprehensions since January 2013, just two months after the crisis hijacked much of July’s congressional session.

In September, 2,424 unaccompanied minors crossed the border, which is 8,000 less than the surge in May and June, according to Homeland Security Department data. Though these figures may sound encouraging, it doesn’t mean the problem is permanently solved, advocates and administration officials say.

Originally, DHS officials estimated that about 60,000 unaccompanied minors would illegally enter the country by Sept. 30. But that projection increased to 90,000 during the summer—a change attributed to children fleeing escalating violence, gang recruitment, and economic disparities plaguing Central America’s Northern Triangle. The actual total was about 68,500, according to the newly released data.

But, DHS Secretary Jeh Johnson warned, what officials called a “border crisis” over the summer isn’t over.

Much of illegal migration is seasonal,” Johnson said Thursday at the Center for Strategic and International Studies. “The spike in migration we saw this summer could return. The poverty and violence that are push factors in Honduras, Guatemala, and El Salvador still exist.”

Wendy Young, Kids in Need of Defense executive director, said the cycle of migration could certainly contribute. But there’s another factor at play here: the number of kids being intercepted by Mexico or other countries’ governments before actually making it to the United States.

“That’s concerning to me,” Young said, “because it’s not that other countries don’t have the right and representatives to control their own borders, but I think there are very, very serious concerns about if the kids are accurately screened for protection before they’re repatriated.”

At the crisis’s peak, 10,622 unaccompanied children were apprehended at the border in June. This uptick spurred President Obama to ask Congress in July for $3.7 billion in emergency funds, which went unappropriated.

But there was a response, albeit much smaller: More detention space was built in New Mexico and Texas. Hundreds of border-patrol agents were assigned to the Rio Grande Valley sector. Media campaigns were launched in Central America, highlighting the dangers of letting criminal smuggling organizations lead children on a journey to the border, according to Johnson.

“We are establishing in-country refugee processing to provide a safe, legal and orderly alternative to the dangerous journey that children are currently undertaking to join relatives in the United States,” Shawn Turner, a spokesman for the White House, told the newspaper. “These programs will not be a pathway for children to join undocumented relatives in the United States.”

While this story garnered much attention in June and early July, it largely started to disappear from the headlines after that, thanks in part to events such as the downing of Flight MH17 in Ukraine and the ongoing crisis in that country and, of course, the rise of ISIS and the expansion of American military action in Iraq and Syria. While it was in the news, though, it became something of a political football for Republicans who were, as always eager to bash the President while failing to actually do anything substantive themselves. Texas Governor Rick Perry, for example, spent weeks calling on the President to call up the National Guard despite the fact that he was empowered to do that very thing himself. When Perry did make that move, it proved to be entirely symbolic and meaningless, and it doesn’t seem that the move has done anything to enhance border security. In the meantime, Congress, which was responsible for the law that requires the Administration to give these unaccompanied minors at least temporary asylum until a hearing can be held, failed to act as well by failing to pass any kind of a bill to enhance security or provide additional resources, thanks largely due to opposition from the Tea Party wing of the Party. Once Congress went into recess at the end of August, the issue basically faded from memory, although it has become part of the standard rhetoric of anti-immigrant Republicans like Iowa Congressman Steve King and Texas Congressman Louie Gohmert.

As for the reasons that the tide of migrants has receded from what we saw in the summer, there are likely as many reasons as there were causes for the crisis to begin with. As the linked article notes, the change in seasons does impact migration patterns from the south regardless of other factors, and nations such as Mexico have apparently been doing a better job of stemming the tide crossing their own border with Central America. In addition to this, though, it seems likely that the fact that the Administration was fairly aggressive in trying to get the message across to people in Central America that coming to the United States illegally in this manner was not a ticket to asylum, and that sending children north without supervision was dangerous to them both physically and because it put them at risk for being exploited by drug gangs and others. Additionally, there were several plane loads of these migrants who were returned to nations like El Salvador, Guatemala, and Honduras almost immediately after they were apprehended at the border. To some degree, one has to think that this helped get the message across that the this was not a viable strategy to get into the United States.

The tide hasn’t been fully stemmed, of course, and it’s unlikely that it will be as long as the economic and political conditions in these countries remain in the terrible state that they still are. We may also so see the tide of immigration return to the levels of the summer at some point, at which point this story is likely to be back in the headlines, though. For the moment, though, the border crisis seems to have actually receded, contrary to the dire predictions of many on the right. 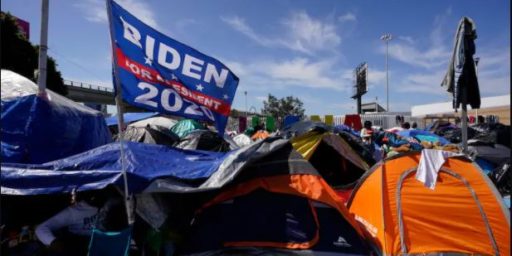