Time For A Fat President ?

Is it time to elect a President that doesn't have that "lean and hungry look" ? 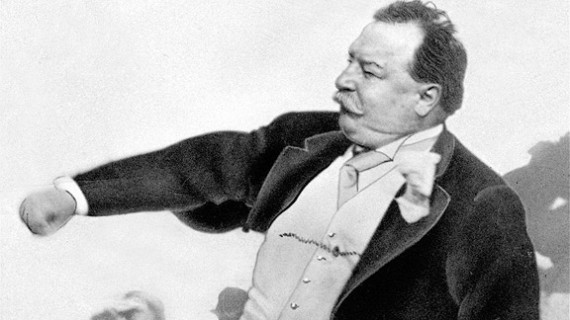 America might do better with a fat president. After all, some of our best have been big fellows, and lately the trim and ambitious types haven’t served us so well.

“Yon Cassius has a lean and hungry look; he thinks too much. Such men are dangerous,” Shakespeare’s Julius Caesar comments to Marc Antony. “Let me have men about me that are fat … such as sleep o’ nights.”

There’s valuable insight there. Keeping fit is fine, but it’s hard to trust someone who has spent decades counting carbs so he can stay light enough to leap for the brass ring.

A few years back, Slate examined the relationship between flab and presidential performance. What it found suggests that if you want New Frontiers and crusades for democracy, then vote for the skinny striver. If you’d prefer someone who leaves well enough alone — who’s content to preside over peace and prosperity — pick the porker.

Per Slate, our four chubbiest chief executives were Presidents Taft, McKinley, Cleveland and Taylor. McKinley, a high-tariff Republican who took us into an unnecessary war, was no prize, but the rest lived large and governed lightly.

I once joked that my favorite president was a chunky, draft-dodging, scandal-plagued Democrat elected in ’92 … (wait for it) … Grover Cleveland. (The Big-Mac-gobbling Bill Clinton was pretty flabby himself, and lately he looks ever better compared to his successors.)

Like a giant, implacable Buddha, the Great Cleveland set his bulk against Big Government, wielding the veto pen more than any president before. Even $10,000 to relieve Texas farmers during the 1887 drought was too profligate: “I can find no warrant for such an appropriation in the Constitution.”

Our 27th president, William Howard Taft, didn’t start any major wars or federal programs, so he’s now best known for weighing in at 355 and installing a plus-sized White House bathtub. But Taft fought hard against Teddy Roosevelt’s grandiose visions of presidential power, insisting that “the president cannot make clouds to rain, cannot make the corn to grow” — and that Roosevelt’s notion of the chief executive as national savior would lead to an imperial presidency.

Healy goes on to talk about New Jersey’s Chris Christie, who has become something of a celebrity among national Republicans for his tough-talk, no-nonsense approach to cutting the Garden State’s budget. Christie, of course, is rather corpulent, and his weight even became something of an issue during last year’s election:

It is about as subtle as a playground taunt: a television ad for Gov. Jon S. Corzine shows his challenger, Christopher J. Christie, stepping out of an S.U.V. in extreme slow motion, his extra girth moving, just as slowly, in several different directions at once.

In case viewers missed the point, a narrator snidely intones that Mr. Christie “threw his weight around” to avoid getting traffic tickets.

In the ugly New Jersey contest for governor, Mr. Corzine and Mr. Christie have traded all sorts of shots, over mothers and mammograms, loans and lying. But now, Mr. Corzine’s campaign is calling attention to his rival’s corpulence in increasingly overt ways.

Meanwhile, Mr. Corzine, 62, is conspicuously running in 5- and 10-kilometer races almost every weekend, as he did last Saturday and Sunday, underscoring his athleticism and readiness for the physical demands of another term — and raising doubts about Mr. Christie’s.

Corzine was wildly unpopular at the time, and the ad clearly backfired on him since it seemed to reinforce the notion that he was desperately trying to hang on to the Governor’s Mansion. Christie was easily elected Governor, despite his weight.

Of course, running for Governor of New Jersey is different from running for President. Americans have expectations about their President’s physical condition that seem to have become more and more stringent once the television became the central means of campaigning. Not only don’t we have fat Presidents anymore, but we haven’t had a President with facial hair since William Howard Taft, and the last major-party candidate with a mustache was Thomas Dewey.

These may seem like superficial issues, but many people vote for President based on superficialities rather than substance, and I’m not sure that’s going to change any time soon.