Via Politico:  Kelly: ‘No question’ people will die if stop-and-frisk ends

New York City Police Commissioner Ray Kelly says there’s "no question" more people would die if the city’s next mayor ends the controversial stop-and-frisk policy, which a federal judge has struck down as unconstitutional.

"No question about it, violent crime will go up," Kelly said Sunday on NBC’s "Meet the Press: when host David Gregory asked if more people would die.

The defense is hardly a surprise, as it the basis of the entire policy:  violating the rights of innocent persons is ok because, after all, there are criminals out there and you want to be safe, right?

This is hardly new, but it does seem like far too many policies of late fit this paradigm (see, e.g., the TSA, the NSA, drones, etc.). 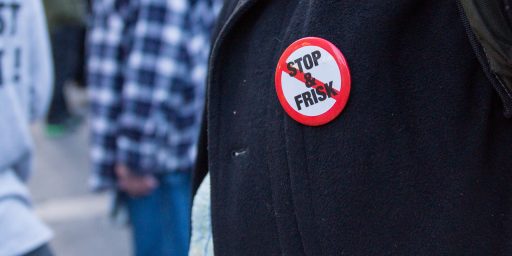