President Trump may be looking to push Chief of Staff John Kelly aside by giving him a next to impossible job. 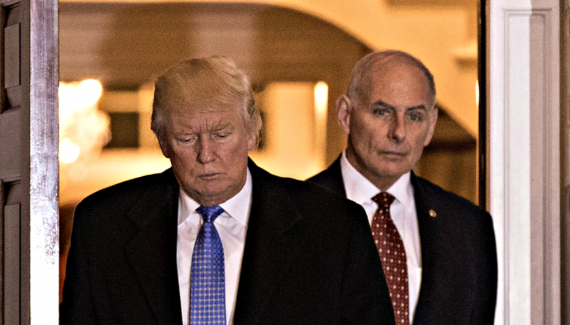 With Ronny Jackson out of the picture and apparently back at the White House Physician’s Office, although apparently not officially back on duty as the President’s doctor, Gabriel Sherman at Vanity Fair is reporting that there’s some talk in the White House of moving Chief of Staff John Kelly to the Veterans Administration:

For months, Donald Trump has discussed replacing his chief of staff, John Kelly, who has attempted, with increasing futility, to rein in the president’s impulses since ascending to the job last year. For the past few weeks, Trump has often governed as if Kelly weren’t there, as evidenced by yesterday’s Fox & Friends interview, during which the president essentially undermined his own legal defense. The cringe-inducing telephone interview was precisely the kind of unscripted media appearance the chief of staff had made a point of preventing.

Now, talk of Kelly being jettisoned is ramping up again. According to sources familiar with the situation, White House officials and Trump confidantes are currently discussing the possibility of moving Kelly to head the Department of Veterans Affairs. These people say that the collapse of Rear Adm. Ronny Jackson’s nomination has created an opening for Trump to slide Kelly into the role. It would give Kelly a soft landing, while also having the benefit of putting a qualified official in charge of the sprawling department. “They’re looking for a place for Kelly to land that won’t be embarrassing for him,” one Republican briefed on the conversations said.

It’s unclear how actively Trump is considering the shake-up. (A White House spokesperson said Kelly is not being considered for the V.A.) Such a move, after all, would magnify the fact that Trump hasn’t settled on a viable successor for Kelly’s job. “That’s the issue: how to structure the White House,” the Republican said. The names that have surfaced in the past—lobbyist David Urban, Blackstone senior adviser Wayne Berman, White House Budget Director Mick Mulvaney—don’t appear any closer to being Trump’s pick.

The idea that Trump may be looking at moving Kelly out of his position of Chief of Staff even before he’s been in the position for a year isn’t a new one, of course. Rumors to this effect have been circulating in Washington for months now amid reports that Trump has grown increasingly frustrated with Kelly’s efforts to impose some sense of discipline on an undisciplined White House and an undisciplined President. More than once, there have been reports of disputes between Kelly and Trump over these restrictions, as well as growing conflict between Trump and Kelly. One report, for example, alleged that Kelly and Trump had gotten into a heated argument in the Oval Office to the point where Kelly actually started boxing up some of his personal belongings in preparation for leaving the office that very day. Obviously, that didn’t happen, but that hasn’t stopped the reports about conflicts between the two, as well as increasing efforts by Trump to essentially make an end run around Kelly by calling people without going through him and excluding him from important phone calls, including a call with Russian President Vladimir Putin in which Trump congratulated Putin on his win in an election that nobody believes was actually legitimate. Additionally, there have been those who wondered how long Kelly, who has been on duty ever since signing up for the Marine Corps decades ago, would put up with this kind of humiliation although it seems clear that his sense of duty is playing a large role in his decision to stay where he is.

CNN touched upon this earlier this week in its own report that Kelly actually seems to be ceding control of access to the President and the White House Staff, a possible signal that he may realize that his days as Chief of Staff are numbered:

As Reince Priebus was approaching his final days in the West Wing, staffers had a running joke: if you got between the frenzied chief of staff and the Oval Office, you risked being run over as he darted from meeting to meeting, hoping to force himself into President Donald Trump’s good graces.

John Kelly, who now finds his standing in the White House similarly fractured, has adopted a different approach. Sources inside the West Wing say Kelly has attempted no such effort to insert himself into the President’s daily interactions. Now less engaged in West Wing decisions and less visible in Trump’s day-to-day, Kelly has found himself on a downward slide, sources familiar with the situation said.

Though Kelly used to hold senior staff meetings in his office three times a week, the chief of staff has reduced those to one per week, preferring instead to hold smaller meetings with fewer staffers throughout the day, a source with knowledge of the meetings tells CNN.

Kelly was initially expected to quiet a chaotic West Wing by instilling order and restraining an impulsive President. But his limited influence has been on full display in recent weeks as Trump has shown himself more unleashed than ever. Just this week, he lashed out at the special counsel, his attorney general and his deputy attorney general as part of a larger outburst during a meeting with senior military officials that was supposed to focus on his administration’s response to Syria.

Kelly, a retired Marine Corps general, was horrified at the highly charged display, according to one person familiar with his reaction.
Trump’s erratic behavior hasn’t waned. He promised a missile strike on Syria Tuesday morning before a final decision had even been made.

Ironically, the chaos he was brought in to quell may serve to bolster Kelly’s standing. Even as Trump has considered overhauling his staff, including weighing whether Kelly should go, various crises have served to put off the decision.

On Wednesday, White House press secretary Sarah Sanders said it was “just not accurate” that Kelly had been sidelined.

“I have seen him in nearly every meeting and several one on ones with (Trump),” Sanders said.

Previously, The Washington Post reported that Kelly’s role as White House disciplinarian had largely come to an end:

After White House Chief of Staff John F. Kelly pressured President Trump last fall to install his top deputy, Kirstjen Nielsen, atop the Department of Homeland Security, the president lost his temper when conservative allies argued that she wasn’t sufficiently hard line on immigration. “You didn’t tell me she was a [expletive] George W. Bush person,” Trump growled.

After Kelly told Fox News Channel’s Bret Baier in a January interview that Trump’s immigration views had not been “fully informed” during the campaign and had since “evolved,” the president berated Kelly in the Oval Office — his shouts so loud they could be heard through the doors.

And less than two weeks ago, Kelly grew so frustrated on the day that Trump fired Veterans Affairs Secretary David Shulkin that Nielsen and Defense Secretary Jim Mattis both tried to calm him and offered pep talks, according to three people with knowledge of the incident.

“I’m out of here, guys,” Kelly said — comments some interpreted as a resignation threat, but according to a senior administration official, he was venting his anger and leaving work an hour or two early to head home.

he recurring and escalating clashes between the president and his chief of staff trace the downward arc of Kelly’s eight months in the White House. Both his credibility and his influence have been severely diminished, administration officials said, a clear decline for the retired four-star Marine Corps general who arrived with a reputation for integrity and a mandate to bring order to a chaotic West Wing.

Kelly neither lurks around the Oval Office nor listens in on as many of the president’s calls, even with foreign leaders. He has not been fully consulted on several recent key personnel decisions. And he has lost the trust and support of some of the staff, as well as angered first lady Melania Trump, who officials said was upset over his sudden dismissal of Johnny McEntee, the president’s 27-year-old personal aide.

The recurring and escalating clashes between the president and his chief of staff trace the downward arc of Kelly’s eight months in the White House. Both his credibility and his influence have been severely diminished, administration officials said, a clear decline for the retired four-star Marine Corps general who arrived with a reputation for integrity and a mandate to bring order to a chaotic West Wing.

Kelly neither lurks around the Oval Office nor listens in on as many of the president’s calls, even with foreign leaders. He has not been fully consulted on several recent key personnel decisions. And he has lost the trust and support of some of the staff, as well as angered first lady Melania Trump, who officials said was upset over his sudden dismissal of Johnny McEntee, the president’s 27-year-old personal aide.

The Post report goes into much further detail about the manner in which Kelly’s role has been cut back but also notes that Trump retains respect for Kelly and still often feels the need to defer to his opinion. The main reason for this appears to be Trump’s natural tendency to defer to men with military experience such as Kelly and Defense Secretary James Mattis, both of whom have been reported as often openly disagreeing with the President that other members of his inner circle have almost never done. That respect for the Generals hasn’t been universal, of course, as former National Security Adviser H.R. McMaster learned roughly a month ago when he was forced out as National Security Adviser and replaced by former Ambassador to the United Nations John Bolton. Nonetheless, that respect for the military appears to be the only thing keeping Kelly in his position for now, well that and the fact that Kelly himself feels some sense of obligation to stay on notwithstanding the fact that he has basically failed in his efforts to bring order to a disordered White House.

As for whether or not Kelly would be an appropriate choice for the Department of Veterans Affairs, that’s not entirely clear. The argument in his favor would point out the fact that prior to the joining the Trump Administration as the Secretary of Homeland Security, Kelly had served as Commander of the U.S. Southern Command as well as in several command positions over American forces in Iraq, In this respect, he at least has more relevant experience for the position than Jackson did. Whether that’s sufficient or not is a different question. As I noted earlier this week, ideally the best type of candidate for this position would be someone with significant administrative and executive experience over large organizations, preferably in the medical field. Kelly certainly qualifies for the first part of that equation as the Southern Command is a large organization that covers the American military operations in Central and South America as well as the Caribbean. Whether that’s sufficient to give Kelly the experience he would need to head the second biggest bureaucracy in the Federal Government is a question that the Senate may or may not be called upon to answer.