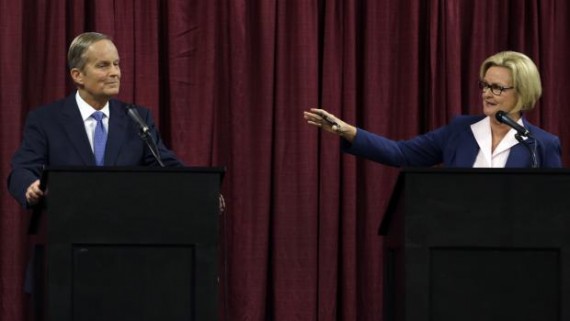 Todd Akin had a pretty rough debate the other night with Senator Claire McCaskill and apparently he didn’t like it:

JEFFERSON CITY – More than a month after his comments about “legitimate rape” nearly derailed his campaign for U.S. Senate, Republican Todd Akin said Thursday that it has become clear to him that he will triumph over Democratic incumbent Sen. Claire McCaskill this fall.

Part of his confidence, he said, comes from McCaskill’s demeanor during their debate last week, which he said was not as “ladylike” as it was when she faced off with Republican Jim Talent in 2006.

“I think we have a very clear path to victory, and apparently Claire McCaskill thinks we do, too, because she was very aggressive at the debate, which was quite different than it was when she ran against Jim Talent,” Akin said. ”She had a confidence and was much more ladylike (in 2006), but in the debate on Friday she came out swinging, and I think that’s because she feels threatened.”