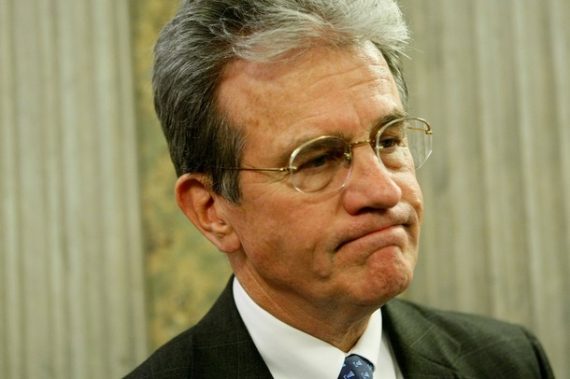 You don’t often see a sitting Republican donate to the re-election campaign of a sitting Democrat, but that’s what Tom Coburn has done:

“I think he votes thinking about the long-term interests of the country. We don’t agree on everything but he’s a good guy,” Coburn told The Hill.

A new fundraising report filed with the Federal Election Commission showed that Coburn donated to Manchin, who faces re-election in November, in late June.
Manchin, who was elected with 53 percent of the vote, is expected to soundly defeat Republican challenger John Raese.

Coburn has been at the center of bipartisan talks with Sens. Mark Warner (D-Va.), Dick Durbin (D-Ill.), Kent. Conrad (D-N.D.), Mike Crapo (R-Idaho) and Saxby Chambliss (R-Ga.) over a package to cut spending and raise taxes.

Manchin has said he wants to pass a major deficit-slashing bill at the end of the year, avoiding questions about whether he would vote to extend all of the Bush tax cuts or only those for families earning below $250,000.

Coburn’s move was a deliberate one, only donations above $250 are required to be broken down individually on FEC reports. So, he made the donation knowing and likely intending that it become public knowledge. What it means for the future of bipartisanship in the Senate remains unclear.