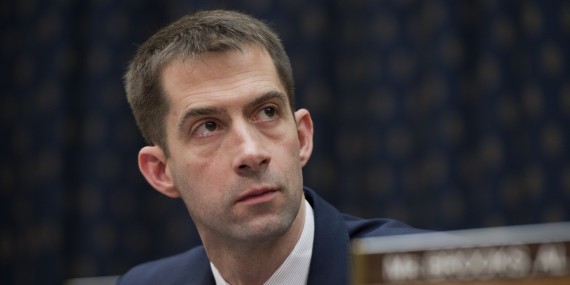 The open letter to the leaders of the Islamic Republic of Iran signed by 47 senators and instigated by Sen. Tom Cotton (R-Ark.) was a stunning breach of protocol. One so outrageous that my former colleagues at the New York Daily News dubbed the signers “traitors.” While it is indeed a slap in the face of President Obama and an affront to the presidency, I’m not sure I would go that far, especially since Cotton is an Army veteran of the Iraq and Afghanistan wars. So, I turned to retired Major Gen. Paul D. Eaton for perspective. He wouldn’t say Cotton and Co. were “traitors,” either. He had a better word.

“I would use the word mutinous,” said Eaton, whose long career includes training Iraqi forces from 2003 to 2004. He is now a senior adviser to VoteVets.org. “I do not believe these senators were trying to sell out America. I do believe they defied the chain of command in what could be construed as an illegal act.” Eaton certainly had stern words for Cotton.

“What Senator Cotton did is a gross breach of discipline, and especially as a veteran of the Army, he should know better,” Eaton told me. “I have no issue with Senator Cotton, or others, voicing their opinion in opposition to any deal to halt Iran’s nuclear progress. Speaking out on these issues is clearly part of his job. But to directly engage a foreign entity, in this way, undermining the strategy and work of our diplomats and our Commander in Chief, strains the very discipline and structure that our foreign relations depend on, to succeed.”

Now, I’m generally a fan of Paul Eaton and agree with him on foreign policy matters more often than I do Tom Cotton. But let’s not pretend that Eaton is a neutral observer here. He’s a senior advisor to the Democratic-aligned National Security Network.

Likewise, I’m more more aligned with Eaton than I am Cotton on the particular matter of our negotiations with Iran over their nuclear program. While I’m skeptical that we’ll get an ironclad deal with the mullahs that allows the level of intrusive inspections that are required to make an agreement meaningful, I don’t see a better alternative on the table. And, while I don’t think Cotton’s letter will impact the negotiations one way or the other, I agree with Eaton that they’re unhelpful.

All that said, Eaton is flat out wrong on the matter of Congress’ proper role and the notion that the letter is “mutinous” is simply absurd.

In his capacity as an Army officer, Eaton was subject to a chain of command. The president, in his Constitutional role as commander-in-chief, is at the top of that chain. Similarly, during his time in the Army, Cotton was subordinate to the president, as was I during my own long-ago stint.

There is an argument to be had that Eaton, as a general officer on the retired list, is still beholden to the chain of command. It’s a stronger argument for more recently retired officers, who have a powerful sway over former subordinates still in uniform. The argument gets weaker as every year goes by and, since Eaton retired in 2006, it’s pretty weak, indeed, at this point.

There’s zero argument that former officers, like Cotton and myself, who merely served a time in uniform and draw no retired pay, are subject to the chain of command. (I’m an employee of the Defense Department and have some strictures in that regard. But, essentially, my relationship to the chain of command is no different than that any civilian employee has with their bosses.)

Moreover, Cotton is a United States Senator. He is in that capacity a member of a separate, co-equal branch of government. As a matter of protocol, he’s expected to address Obama as “Mr. President.” But he’s not in any way the president’s subordinate. Nor is he required or even expected to observe any sort of “discipline” with regard to the negotiations in which the president engages.

The distinction Eaton makes between “voicing [an] opinion in opposition to any deal” and “directly engag[ing] a foreign entity” is non-existent. Not only are Members of Congress absolutely permitted to engage foreign entities as much as they please, but the “open letter,” like all open letters, was clearly a publicity stunt aimed at the American people, not the leaders of Iran. And, while I happen to disagree with Cotton and his co-signers on the merits here, they’re absolutely entitled to “undermine” foreign policy strategies with which they disagree.

Sen. Tom Cotton Thinks War Against Iran Would Be Easy And Painless