Trump Announces New Sanctions Against North Korea, But They’re Unlikely To Accomplish Much

President Trump has announced a new round of sanctions against North Korea, but they are unlikely to work given the unrealistic nature of the Administration's current policy toward North Korea. 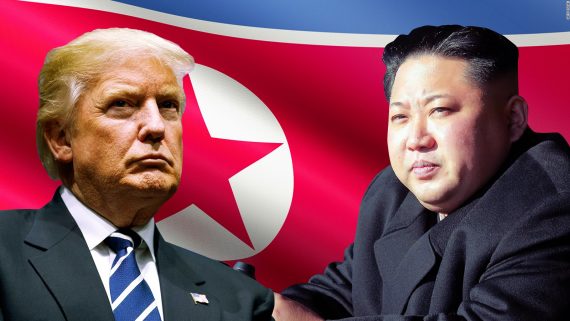 During his speech today at the Conservative Political Action Conference, President Trump announced a new round of sanctions against North Korea:

WASHINGTON — President Trump announced harsh new shipping sanctions against North Korea on Friday — a clear signal, near the end of an Olympic Games marked by a rapprochement on the Korean Peninsula, that his pressure campaign against Pyongyang will not let up.

“Today, I am announcing that we are launching the largest-ever set of new sanctions on the North Korean regime,” Mr. Trump was set to say to the Conservative Political Action Conference, according to excerpts of his remarks released by the White House.

The measures target 27 shipping companies and 28 vessels, registered in North Korea and six other countries, including China. The Treasury Department said the shipping firms are part of a sophisticated campaign to help North Korea evade United Nations sanctions restricting imports of refined fuel and exports of coal.

Illicit ship-to-ship transfers of oil and coal on the high seas have allowed North Korea to avoid the worst of the pressure from sanctions against its nuclear and ballistic missile programs. The smuggling has been linked to China and Russia, increasing tensions with the United States.

Still, it was not clear how successfully the United States could enforce the new measures. Cutting off the illegal trade, analysts said, will require interdicting ships at sea, and North Korea could well regard a blockade or forced inspections of its vessels as an act of war.

The timing of Mr. Trump’s announcement was notable, coming just hours after South Korea’s president, Moon Jae-in, played host at dinner to Mr. Trump’s daughter, Ivanka, who is leading the United States delegation to the closing ceremony of the games on Sunday.

Under Mr. Moon’s liberal government, South Korea has begun engaging with the North. That has caused strain with the Trump administration, which had long ruled out any discussions with the government of Kim Jong-un until it curbed its nuclear and missile tests.

The Treasury Department released satellite photographs of an alleged ship-to-ship transfer involving a North Korean and a Panamanian vessel. The identity of the North Korean ship had been disguised.

n addition to China, the department sanctioned ships from Singapore, Taiwan, Hong Kong, the Marshall Islands, Tanzania, Panama and Comoros. It did not blacklist ships or companies from Russia, even though Russia is suspected of supporting the illicit trade.

A senior administration official said the United States had raised concerns about smuggling with Russia and had previously designated Russian entities with links to North Korea.

This latest announcement of sanctions, the first such announcement of the year, comes at a time when tensions on the Korean Peninsula actually seem to have calmed down to some degree, at least for the time being. That process began on New Year’s Day when North Korean leader Kim Jong Un appeared to extend an olive branch to the Republic of Korea. during his traditional New Year’s Day speech. Among other things, Kim suggested that the two nations reopen mutual talks that had largely ended when the DPRK began escalating tensions on the peninsula, towards its neighbors, and most especially toward the United States. During those years, the DPRK engaged in actions such as a more rapid pace of testing related to its nuclear weapons and ballistic missile programs, both of which showed increased success in both the quality of its nuclear stockpile and the range and accuracy of its missile. This appeal led to the first joint talks between the two nations in nearly a decade. These meetings led to several developments such as the re-establishment of a military hotline between the two nations that had been s shut down by the DPRK and an agreement that will allow North Korean athletes to participate in next month’s Winter Olympics, with both nations marching together during the Opening Ceremonies at the start of the games. Additionally, the two nations agreed that they will have a joint women’s hockey team during the games. Additionally, North Korea was represented at the Opening Ceremonies by a delegation led by Kim Jong Un’s sister and will be represented at the Closing Ceremonies by a delegation led by a top General.

While tensions may have cooled down in the first two months of the year, that seems unlikely to last. For one thing, the United States and South Korea are expected to be holding their annual joint military exercises beginning in a few weeks now that the Winter Olympics are wrapping up and the weather on the Korean Peninsula is improving. Those exercises have always been an irritant for the North and prompted them to lash out with actions of their own such as a new round of testing of either their nuclear or ballistic missile programs, both of which have been quiet for several months now. Additionally, it’s likely that these sanctions, which are among the toughest yet imposed on the DPRK, will provoke a response from the Kim regime, although they are likely to direct their ire at the United States as part of what seems to be an obvious effort to attempt to draw a wedge of any kind between Washington and Seoul. It’s not clear how effective that strategy has been but the Kim regime will no doubt keep that effort up as long as it can if it believes its being effective.

With respect to the sanctions themselves, Daniel Larison is skeptical about their effectiveness:

The U.S. frequently relies on imposing sanctions on other states, but in most cases they fail to achieve Washington’s stated goals. Sanctions are among the least effective tools that the U.S. possesses for advancing its interests, but they are appealing to our political leaders because they are relatively low-risk and low-cost for us while inflicting some pain on an adversary. One reason that sanctions usually don’t work is that the U.S. ostensibly imposes them to change behavior, but really just wants to punish the other state for doing something that it considers undesirable. Sanctions can always punish, but they normally don’t change the targeted state’s behavior in the way that Washington wants.

Another reason that sanctions fail most of the time is that the U.S. applies them in response to behavior that the other state considers both very important and legitimate, and they think that yielding to U.S. demands would have negative consequences for their security and/or national pride. The more bound up with national security and/or national pride an issue is, the less likely it is that the targeted state will ever give in to U.S. demands. There are few issues that are more tied up with these things at this point than North Korea’s nuclear weapons and missile programs. Sanctions will fail to change North Korean behavior on these issues, and the frustrating thing is that we already know this.

To some degree, I think Larison misses the mark in his criticism of sanctions as an effective tool of diplomacy, largely because we can point to times in the past when that strategy has paid off in advancing American interests, making the world a safer place, and bringing about change in regimes that previously seemed unlikely to change. It was sanctions imposed by both governments and private industry, for example, that put significant pressure on the leadership of South Africa to take the steps that eventual end to that nation’s apartheid regime. Granted, it took motivated leaders like Nelson Mandela and then South African President de Klerk to bring that result about, but it was largely due to international pressure via sanctions and isolation that South Korea was brought to the table. More recently, it seems quite apparent that it was the international sanctions that were imposed by a wide variety of nations that brought the Iranians to the table in Switzerland for the talks that led to the Joint Comprehensive Plan Of Action (JCPOA), which has, contrary to the claims of the Trump Administration, been quite successful in ending Iran’s progress toward a nuclear weapon and subjecting the regime to comprehensive inspections adminstered b the International Atomic Energy Association (IAEA), which continues to certify that Iran is indeed complying with the agreement. Properly tied into a viable strategy then, it strikes me that sanctions can be an effective tool in the diplomatic arsenal.

With regard to North Korea, though, I think Larison’s criticism is completely valid. To the extent sanctions do work, they work when they are part of an overall diplomatic strategy that has realistic and achievable goals. In the case of South Africa, the goal was to force the minority white government to end a policy that was leading to vast deprivations of human rights, as well as civil unrest that threatened to undermine the security of southern Africa itself if it had been permitted to continue. In the case of Iran, the goal was to get the Iranians to the table to talk with the hope of reaching an agreement regarding their nuclear research program in talks that would include not just the United States but also Russia, China, the United Kingdom, Germany, and France. In the case of North Korea, though, the goals of current American diplomacy are entirely unrealistic, and that means the sanctions are likely to fail. The current U.S, policy on North Korea is that the eventual goal of any talks with North Korea must include the goal of denuclearization of North Korea. As I’ve stated in the past — see here and here for examples — this is a completely unrealistic and, under current circumstances, unachievable goal. The current North Korean regime is no more likely to agree to abandon its nuclear program than South Korea and the United States are to agree to remove American forces from the Korean Peninsula. Because of that, these sanctions are likely to prove to be as ineffective as what we’ve done in the past What that means, and what it might cause both Pyongyang and Washington to do next, is something I’m afraid we will find out sooner rather than later.