In 1992, an eccentric billionaire ran an independent campaign against a Bush and a Clinton. It could happen again. 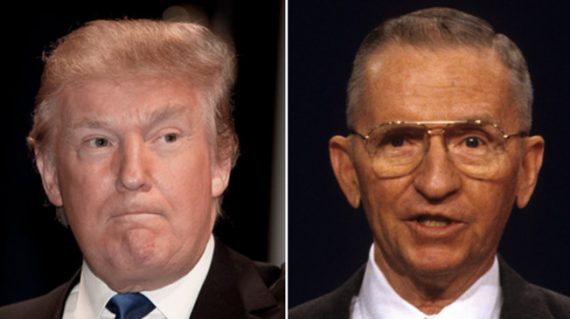 Today, Trump looks like a populism-spouting insurgent with the potential to split the party, giving Republicans cause to keep him in the fold. But that’s because for the moment, he’s running in a Republican primary, solely focused on conservative base voters.

Running as an independent, Trump’s calculus changes. He would then want to pick off votes wherever he could find them, regardless of party affiliation or ideological bent. He would look more like the last billionaire populist to pursue the White House: Ross Perot.

Unlike Trump, Perot bypassed the primaries and never had to target his appeals to the far right. Yet similarities already exist between the two.

Both put a premium on rebuilding American infrastructure, an issue with bipartisan appeal but which particularly animates Democrats. Trump’s only video ad – uploaded to YouTube before he officially announced – stresses two issues: infrastructure and immigration, and infrastructure comes first. “The infrastructure of our country is a laughingstock all over the world,” Trump laments. “Our airports, our bridges, our roadways – it’s falling apart.”

Perot, while primarily focused on balancing the budget in five years, made sure to include $40 billion in new money for infrastructure, along with $69 billion more for research and development, aid to cities and education. “All of that will stimulate jobs,” said Perot, offering a splash of Keynes with his austerity pitch.

There is also overlap on trade, another issue that transcends party lines. Trump has called the pending Trans-Pacific Partnership a “disaster” because “we don’t have our best and our brightest negotiating for us.” Perot said during the 1992 debates that the pending NAFTA agreement would create a “giant sucking sound going south” and pledged as president to “study that 2,000-page agreement and make sure it’s a two-way street.”

Both used their business success to push an anti-Washington message. Trump brags about his wealth and proclaims he is superior to “all-talk, no-action politicians.” Perot batted back questions about his experience by saying, “I don’t have any experience in gridlock government.”

Both represent a jumble of ideologies. Perot proposed a 10 percent across-the-board spending cut to most federal programs, including anti-poverty initiatives. But he also backed higher taxes on the wealthy and said, “Trickle down economics didn’t trickle at all, folks.” He opposed letting gays serve in the military but he was pro-choice on abortion. He was known for his efforts on behalf of prisoners of war, but he opposed the first Iraq War.

An exploration of Trump’s previous political beliefs or myriad party affiliations and alliances over the years will make your head spin: He’s endorsed a massive surtax on the rich, but now wants the top income tax rate cut in half. He’s praised single-payer health care but attacks Obamacare. He was a Republican, then an independent, then a Democrat, then a Republican. In the middle of that faith journey he ran for president on the Reform Party ticket. Also, like Perot, he opposed the second Iraq War.

The parallels Scher points to are striking. In particular, I’d forgotten that Trump had run for the nomination of the Perot-founded Reform Party in 2000, losing to Pat Buchanan.

While I never seriously considered voting for him, I liked Perot quite a bit in 1992 for a lot of the same reasons that people like Trump today. Politicians have to measure their words in a way that eccentric billionaires don’t and there’s something refreshing about straight talk. By 1996, I’d long tired of Perot’s shtick but I nonetheless found him fascinating for some time. I’ve thought of Trump as a clown for as long as I can remember, but maybe the 26-year-old me would have liked him.

Scher notes that, while Trump takes more votes away from the GOP than the Dems in early polling, it’s not as stark as you’d think:

This decade’s billionaire populist is taking 23 percent in a hypothetical three-way race against this decade’s Bush and Clinton. Trump’s presence drove Jeb’s numbers from an RCP average of 43 percent in head-to-head matchups with Clinton down to 23 percent as well.

However, Republican should note that Trump does not leave Hillary unscathed. She drops from 46 percent to 37 percent. True, Jeb is the bigger loser, for now. But we’re only testing the effect of the Republican primary version of Trump. And even that version lops nearly 10 points off of the Democrat. The independent general election model would attract a different mix of voters.

As to the 1992 race, Scher gives a fair recap of the impact Perot had:

Debate continues to rage whether Perot cost George H.W. Bush his re-election or if the sour economy would have handed it to Bill Clinton anyway. There are two schools of thought.

One is quantitative, recently reiterated by MSNBC’s Steve Kornacki. The 1992 exit poll asked Perot voters who was their “second choice.” They split evenly between Clinton and Bush, 38 percent for each. (State exit polls indicate that Perot may have tipped the tight races in Georgia, New Hampshire and Ohio to Clinton, not enough to change the Electoral College outcome.) Kornacki also notes that spring polls showed Perot “splitting the anti-Bush vote and cutting deeply into what should have been Clinton’s base.” When Perot was out of the picture in the summer, Clinton was beating Bush handily in two-way trial heats.

The counter-argument is qualitative: Perot saved the bulk of his animus for Bush and his record, softening him up for Clinton.

History professor Julian Zelizer just recapped that case for CNN: “Perot’s onslaught against Bush … damaged the image the entire American electorate had of his job as president, all of which benefited Bill Clinton …” During the Democratic convention in July, Perot said he was dropping out in part because “the Democratic Party has revitalized itself.” The move helped give Clinton a record “convention bounce”of 16 points in the Gallup poll and a lead he never relinquished.

Not surprisingly, the second narrative was my own sense of the impact in real time. As a substantially more hardline Republican in those days, I was somewhat disillusioned with the elder Bush (who I actively campaigned for during the 1988 primaries and have since come to admire as perhaps the best man to hold the presidency in my lifetime). Buchanan’s attacks on him during the 1992 primaries hurt, as did Buchanan’s “religious war” convention speech. But I remain convinced that there was simply no way that the electorate would have gone from the landslide of 1988, where Bush won by a ten point margin, carrying 40 states and 426 electors to a draft-dodging, dope-smoking, serial adulterer without Perot’s entry into the race. As a Naval Academy grad, self-made billionaire, and minor folk hero after financing a rescue of his employees from Iran, he had the standing to attack Bush that Clinton lacked. When Perot withdrew from the race, essentially endorsing Clinton, it became easier for moderates to make that leap.  There’s no way to run the counterfactual, of course.

I’m too detached from the zeitgeist these days to understand Trump’s appeal. He just strikes me as an ignoramus and a bully. Still, his brand of populism would naturally seem to draw more votes from the Republican fringe—especially one disillusioned by yet another moderate if Jeb Bush or John Kasich were the nominee—than from the Democrat center.

Regardless, I’d very much like to see Bush, Kasich, and other serious Republicans take a strong stand against Trump as we get into the debates. If the GOP is going to be a serious national party again, it’s got to stop alienating the center.  Trump is great entertainment for the lowbrow set but he’s poison for a political party trying to win back broad appeal.