A seemingly 'safe choice' for F.B. I. Director. 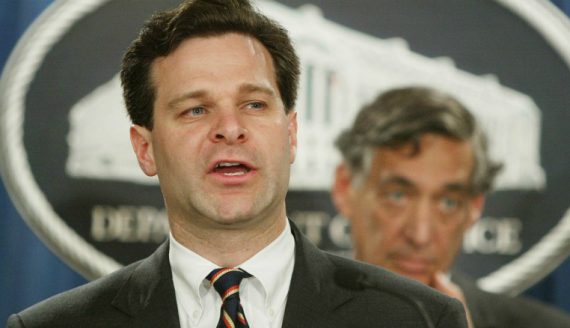 One day before former F.B.I. Director James Comey is set to testify before the Senate Intelligence Committee, President Trump took to Twitter to announce his selection for Comey’s replacement:

WASHINGTON — President Trump said Wednesday that he had selected the former federal prosecutor Christopher Wray, a partner at the Washington law firm King & Spalding, to be his new F.B.I. director.

The president revealed his decision in a morning tweet.

The announcement comes a day before the former F.B.I. director James Comey was scheduled to testify about Mr. Trump’s attempts to get him to end the bureau’s investigation into his former national security adviser’s contacts with Russia. The action may represent an attempt to inject credibility into an investigation rocked by controversy and accusations of presidential tampering.

Mr. Wray is a safe, mainstream pick from a president who at one point was considering politicians for a job that has historically been kept outside of politics. Mr. Wray, a former assistant attorney general overseeing the criminal division under President George W. Bush, is likely to allay the fears of F.B.I. agents who worried that Mr. Trump would try to weaken or politicize the F.B.I.

Mr. Trump abruptly fired Mr. Comey, who had told associates that he felt the president was trying to influence him to drop inquiries that could affect him personally. The pick caps an extraordinary month in which Mr. Trump has been buffeted by his own shifting explanations for why he dismissed the former F.B.I. director, allegations that he shared highly classified information with top Russian officials in the Oval Office and the naming of a special counsel to oversee the investigation into his campaign’s possible ties with Moscow.

The decision was being closely watched not only for who will lead the nation’s premier law enforcement agency, where employees are still reeling from Mr. Comey’s firing, but also for signals about how the president will forge ahead amid the swirl of developments set off by the dismissal. Some Democrats have said impeachment proceedings should begin against him.

Mr. Trump, who fired Mr. Comey without having put in motion a plan to find his successor, conducted a whirlwind search, at one point zeroing in on Joseph I. Lieberman, the former Democratic senator and vice-presidential nominee, as a preferred finalist, even as he considered F.B.I. veterans including Adam S. Lee, the special agent in charge of the bureau’s Richmond, Va., field office; Richard A. McFeely, a former senior official; and Andrew G. McCabe, the acting director. Mr. Lieberman later withdrew from consideration.

CNBC has some biographical information about Wray:

Wray was nominated by President George W. Bush as assistant attorney general in charge of the Criminal Division, according to the U.S. Department of Justice website. He held that job until 2005.

The graduate of Yale Law School led the Enron Task Force when he was with the Department of Justice.

In his tweet, Trump said Wray had “impeccable credentials.”

As head of the Criminal Division, Wray led investigations and prosecutions in securities fraud, health care fraud, money laundering, public corruption and several other areas of federal criminal law, according to the the website of King & Spaulding, a Washington firm where he currently serves as a litigation partner.

I will be nominating Christopher A. Wray, a man of impeccable credentials, to be the new Director of the FBI. Details to follow.

In addition to working in the Bush Administration before going into private practice, Wray’s other claim to fame comes from having been New Jersey Governor Chris Christie’s personal attorney during the Bridgegate scandal, suggesting that Trump may have sought advice from Christie prior to making the selection. In any case, Wray’s name had not come up in the previous speculation about the identity of Comey’s replacement, although it was reported that Wray was among the potential nominees that Trump had met with while searching for a replacement for Comey. His Wikipedia page, meanwhile, appears to have been created just this morning shortly after the announcement of the selection so we don’t know much about him beyond this bare minimum.  There’s more information about Wray available in his biography at the website for King & Spaulding, the law firm where he has been a partner since leaving the Bush Administration. We’ll learn more, I suppose, but the fact that there appears to be little information about Wray based on a Google search that leaves out any hits regarding the just-announced appointment suggests that this will be a relatively non-controversial appointment. Given the fact that Executive Branch appointments are no longer subject to the sixty-vote threshold in the Senate, it’s likely that he will be easily confirmed.

As I said above, the announcement of Wray’s selection, in addition to being unusual in the fact that it was announced on Twitter rather than a formal White House event, comes just over twenty-four hours before former Director James Comey is set to testify before the Senate Intelligence Committee, where it is expected that the primary focus will be on the content of his conversations with the President regarding the ongoing investigation into Russian interference in the 2016 election and contacts between the Trump campaign and Russian officials during that period. In that regard, there have been a number of new developments that seem to be a preview of what we can expect to hear from Comey tomorrow. Late yesterday, for example, it was reported that it was unlikely that Comey would be testifying regarding the question of whether or not Comey committed obstruction of justice, but that he would instead simply be testifying a fact witness to his conversations with the President. As I noted on Twitter last night, this is not entirely surprising and the proper position for Comey to take since it is generally not the job of a fact witness to give legal conclusions. Additionally, it’s unlikely that Comey will be discussing details of the ongoing investigation which is now being led by special counsel, Robert Mueller, with whom Comey is a friend of long-standing. It’s also being reported this morning that Comey told Attorney General Sessions, who now finds himself the focus of media attention, that he did not want to be alone with the President in the future due to the content of his conversations regarding the Russia investigation. It’s also being reported that Trump asked Director of National Intelligence Dan Coats and C.I.A. Director Mike Pompeo to get Comey to “back off” the investigation of former National Security Adviser Mike Flynn. Both Coats and Pompeo are set to testify this morning before the Senate Intelligence Committee, and this report will no doubt come up during their questioning.

As for Wray, as I noted it appears that he’s likely to get easily confirmed, although the Russia investigation and the questions that will be inevitably raised by Comey’s testimony tomorrow will play a role in his confirmation.