Steve Bannon is in. The Chairman of the Joint Chiefs and Director of National Intelligence are out. Sort of. 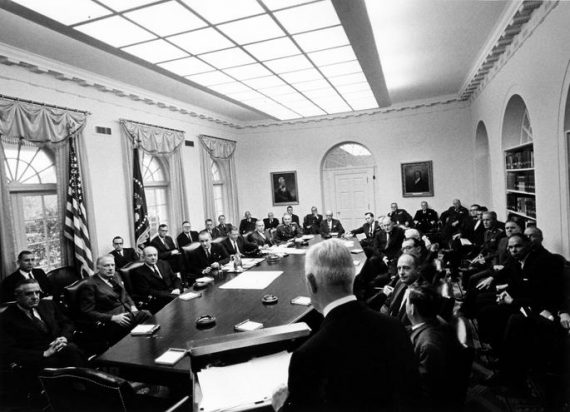 Lost in yesterday’s understandable outrage over President Trump’s executive order banning travel from several predominantly Muslim countries—which was, quite predictably, stopped by the courts—was a rather astounding reorganization of the National Security Council.  It is nowhere to be found on the main page of the New York Times website and one has to scroll way down the page of the Washington Post website to see the story as I type this at 6:20 am.  Yet it is likely to have more far-reaching consequences.

Even the WaPo story gives the news second billing in both the headline (“Trump orders ISIS plan, talks with Putin and gives Bannon national security role“) and the story:

President Trump on Saturday ordered the Pentagon to devise a strategy to defeat the Islamic State and restructured the National Security Council to include his controversial top political adviser as he forged a partnership with Russian President Vladi­mir Putin in their first official phone call.

Counseling Trump in the effort will be Stephen K. Bannon, the White House chief strategist whose influence inside the administration is expanding far beyond politics. In a separate presidential memo, Trump reorganized the National Security Council to, along with other changes, give Bannon a regular seat on the principals committee — the meetings of the most senior national security officials, including the secretaries of defense and state.

That memo also states that the director of national intelligence and the chairman of the Joint Chiefs of Staff will sit on the principals committee only when the issues to be discussed pertain to their “responsibilities and expertise.” In the previous two administrations, both were included as regular attendees.

The White House thinks the changes will make the NSC more adaptive to modern threats. Trump said the changes would bring “a lot of efficiency and, I think, a lot of additional safety.”

The changes affirm the ascent of Bannon, the former executive chairman of Breitbart, a conservative website that is popular with white nationalists, who has emerged as Trump’s political consigliere and the keeper of the president’s populist flame.

Putting Bannon on the NSC and its Principals Committee is being portrayed in some circles as an unprecedented politicization of the interagency process. Given that Ben Rhodes, a partisan operative and speeechwriter with no education or training in the trade,  was the Deputy National Security Advisor and arguably the most important policy advisor to President Obama, I can’t get too worked up about that. Bannon having a key foreign policy role is problematic because Bannon is a malevolent actor with no understanding of global affairs, not because he doesn’t have a traditional national security billet. And, frankly, if Bannon is going to be one of the voices Trump most listens to, he may as well be in the room when people who know what they’re talking about are discussing the issues; he might learn something.

More problematic is that Trump has removed the Chairman and the DNI from the normal rotation. This is so unusual that I was under the impression that it was illegal. It is not. While the Goldwater-Nichols act of 1986 made the Chairman a statutory advisor to the NSC and the Homeland Security Act of 2002 created the DNI and made him a statutory advisor—and while every president has included them in both the NSC and Principals Committee structure—the law is quite clear that their attendance is optional “and subject to the direction of the President.”

Given the way in which the first eight days of the Trump presidency has unfolded, however, this smacks of intentionally removing divergent opinions shaped by real experience in global affairs from the room. This is somewhat mitigated by having a Secretary of Defense who only recently retired as a four-star Marine general. Still, the Chairman is designated by law as the principal military advisor to the President and the NSC; it’s a lot easier to serve that function if you’re in the room and privy to all the conversations.