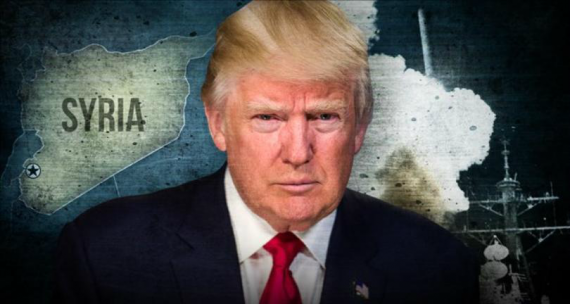 President Trump’s tweeting about his possible response to the chemical weapons attack in Syria continues to sow confusion and cause problems for those under him, while simultaneously undercutting the potential effectiveness of any strike he may eventually decide on:

WASHINGTON — President Trump said in a tweet early Thursday that he had never telegraphed the timing of an attack on Syria, and that such a strike — for which he put Russia and Syria on notice just one day earlier — “could be very soon or not so soon at all!”

France, on Thursday, said that it had proof the Syrian regime had used chemical weapons in a deadly attack near Syria’s capital on Saturday.

Britain’s cabinet is scheduled to meet on Thursday to discuss joining a military operation with the United States, the BBC reported. British submarines were ordered within missile range of Syria, according to The Daily Telegraph.

And Germany announced that it would not be part of any coordinated military action in Syria. German Chancellor Angela Merkel stressed the importance of Western powers sending a clear, united message that using chemical weapons “is unacceptable.”

“Germany will not take part in possible military action — I want to make clear again that there are no decisions,” Ms. Merkel said after meeting with Lars Lokke Rasmussen of Denmark in Berlin.

Germany refused to take part in the U.S.-led war in Iraq, and in 2011 abstained from a U.N. Security Council resolution authorizing the use of military force to protect civilians in Libya.

Heeding Mr. Trump’s warning on Wednesday about an American response, Syria has moved military aircraft to the Russian base near Latakia, and is working to protect important weapons systems. The Russians and Iranians have also been preparing for an American response, and the Trump administration’s delay in acting is giving Syria and its allies more time to prepare.

Mr. Trump has previously belittled American leaders for giving the enemy advance warnings of a strike. In his tweet on Thursday, the president defended his warning a day earlier and appeared to try to reintroduce the element of surprise over a possible American missile strike, underscoring what critics have described as a confusing policy on United States involvement in Syria.

The Trump administration, which has not yet confirmed the use of chemical weapons by the Syrian regime, is looking to coordinate its response with allies, including France and Britain.

The president’s tweets about a possible response isn’t helping that effort, said Kevin Ryan, a retired Army brigadier general who is now an associate at Harvard’s Belfer Center for Science and International Affairs.

“When the commander in chief speaks publicly about a potential military action, it creates boundaries and limits on what his subordinates can offer him as options,” Mr. Ryan said. “That’s helpful if his public statements are thoughtful and clear. If those statements are confused and unclear, then they are a hindrance to the outcome. I think the latter is happening right now.”

As a preliminary matter, I find myself once again both exasperated that we are once again in the surreal position where important issues of state that, in this case, could mean the difference between life and death for people and which have the potential to push the United States are being broadcast and disclosed not via official White House communications or briefings from the State Department or Department of Defense, but via Presidential tweets. It’s far too late to complain about this, of course, given the fact that this President has been using his Twitter account as a platform and a weapon since before he became a candidate for President and he made clear after winning the election that he wasn’t going to give up his Twitter account, although it’s unclear exactly how he’s accomplishing it given the fact that his predecessor was not permitted to have an unsecured smartphone at all and was instead given a specially built, heavily secured, Blackberry he could use for email and some other purposes. On more than one occasion since the President has taken office in January 2017, Trump’s tweeting has delved into areas of foreign policy, most often directed at hurling insults and thinly veiled threats at the leader of North Korea. More often than not, these tweets have undercut existing policies, or even undercut diplomatic efforts his own appointees were attempting to make around the world. Most importantly, though, the frequent use of Twitter and the fact that it so often seems to be reactionary based on what he sees on television has revealed much about the way Trump’s mind works, and the manner in which he can be manipulated into potential overreaction. Given all of that, one would have thought that someone would have tried to discourage him from using Twitter to talk about foreign policy matters. Perhaps they have, but if it’s happened it has failed completely, so here we are in a world where some of the most important issues facing the United States are being broadcast and seemingly decided via Twitter.

So, for better or worse, here’s the President’s Tweet from this morning:

Never said when an attack on Syria would take place. Could be very soon or not so soon at all! In any event, the United States, under my Administration, has done a great job of ridding the region of ISIS. Where is our “Thank you America?”

To a large degree, of course, this tweet was meant to push back against the argument that many Trump critics had made yesterday when they pointed out, correctly, that the President had violated his own promise that he would not telegraph his moves in the foreign policy in the manner that he claimed the Obama Adminstration did. The reality, of course, is that this is exactly what Trump did and what he continues to do every time he takes to Twitter to talk about subjects such as this. If he really didn’t want to telegraph his moves or his foreign policy, then he wouldn’t talk about these matters via social media at all. Alas, that is obviously asking far too much from this President.

Leaving aside the propriety of conducting foreign policy via Twitter, it seems fairly obvious to me that what the President is doing here is quite obviously going to guarantee that whatever he ultimately ends up doing with regard to Syria will be largely ineffective due to the fact that he’s essentially given the Syrians and the Russians the time that they need to move important Syrian assets to areas where they’ll be safe. This includes not just locations that we can’t necessarily track, but also locations that are under the protection of Russia and Iran where, if we did strike, we’d be risking casualties from those nations that would dramatically increase tensions in the region. Given that, whatever we do end up doing, whether it comes in the next couple days or not until next week, will be just as ineffective as the strike last year was. It will be an attack that will make those who favor it feel as if they’ve accomplished something, and it may even help temporarily boost the President’s job approval numbers. In the end, though, it will accomplish just as little. 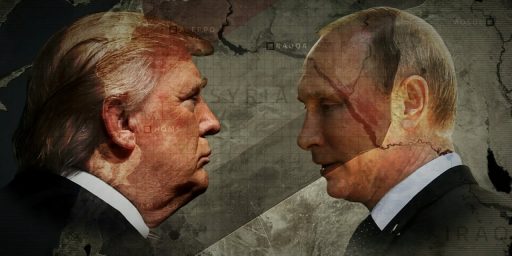