Top administration and congressional officials can skip the indignities of airport screening, even when they fly commercial. 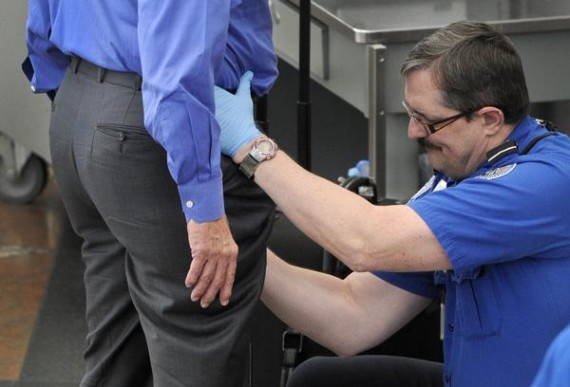 In addition to the President and Vice-President and their families, there are many other government officials who never have to worry about being groped by the TSA:

Aviation security officials would not name those who can skip the controversial screening, but other officials said those VIPs range from top officials like Treasury Secretary Timothy Geithner and FBI Director Robert Mueller to congressional leaders like incoming House Speaker John Boehner, R-Ohio, who avoided security before a recent flight from Washington’s Reagan National Airport.

The heightened new security procedures by the Transportation Security Administration, which involve either a scan by a full-body detector or an intimate personal pat-down, have spurred passenger outrage in the lead-up to the Thanksgiving holiday airport crush.

But while passengers have no choice but to submit to either the detector or what some complain is an intrusive pat-down, some senior government officials can opt out if they fly accompanied by government security guards approved by the TSA.

The TSA would not explain why it makes these exceptions. But many of the exempted government officials have gone through several levels of security clearances, including FBI background checks. Armed security details eliminate the need for an additional layer of security at airports.

Excluding such people from regular security procedures does make sense on some level, but then so does not subjecting an 56 year old retiree recovering from bladder cancer to a pat-down so invasive he ends up covered in his own urine.

UPDATE (James Joyner): I was working on a post when I saw Doug beat me to it.   I understand the outrage, which Michelle Malkin captures nicely:

DHS motto: Homeland security waivers for we, but not for thee. Now, submit or pay up!

But it seems to me that the answer to stupidity is to decrease it rather than increase it.   To the extent that these procedures are legitimately aimed at screening out potential terrorists, it’s silly to pretend that high ranking government officials, traveling with a screened security detail, are plausible suspects.    So, by all means, let them avoid the silliness.

By the same token, though, why not increase pre-screening beyond that handful of Special People?   Surely, military officers, CIA agents, Foreign Service Officers, federal cops, and other highly screened people should be able to go into a separate line?   They’re more thoroughly screened than an airline flight attendant.   And we already have various programs whereby frequent travelers can pay to get background checks and undergo modestly less screening at the airport.  Why not beef those up and give those people the same status as flight crew?

Obviously, even these people who require some screening at the airport. Extremely trusted individuals (think: Robert Hanssen or Nidal Malik Hassan) can wind up being traitors or terrorists.   And, while al Qaeda is unlikely to infiltrate the president’s cabinet, surely they could get people through the screening process required of flight attendants.   But the risks are so much lower for these people that a cursory check would be adequate.