This is one of the most draw-droppingly stupid 29 seconds I have experienced in some time. 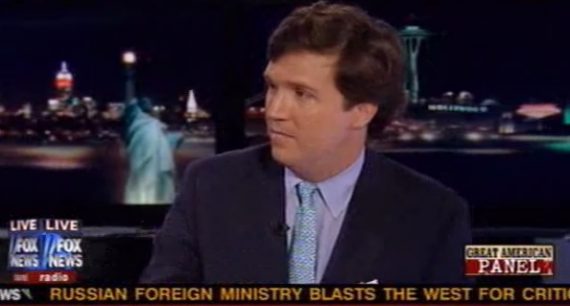 I don’t often make such strident statements, but I feel I am actually being kind after watching the following clip”:

Ok, so in less than thirty seconds we get:

1.  The US is the only country in the world with the “moral authority” to launch preemptive war.

3.  “Iran deserves to be annihilated” because they are “lunatics” and “evil.”

4.  The risk of “tanking our economy” as a result of an explosion of oil prices is just a “small factor” to be considered.

(That’s an impressive amount of stupid per second, I must say).

Now, in regards to point #1:  This is a claim without a foundation.  The US may be the only country in the world with the power to launch preemptive wars on a global level but unless might does, in fact, make right then I fail to see the moral foundation for such acts.  This also underscores that Carlson apparently learned nothing from the Iraq war.

Indeed, on that count it is worth noting in this context that one of the reasons the Iranians want a nuclear weapon is because they learned a key lesson from that invasion:  one “Axis of Evil” country without nukes (Iraq) was invaded, while one “Axis of Evil” country with nukes (North Korea) gets treated with kid gloves.  Further, the remaining “Axis of Evil” country without nukes (Iran) has been the subject of invasion talk for almost a decade.  Another factor linked to the invasion of Iraq:   Iran’s security was clearly threatened (and continues to be) by the US military presence in the region (note:  Iran is bordered by Iraq and Afghanistan).  Security threats lead states to pursue means to increase their security, hence the drive to acquire a nuclear weapon.

In response to #2:  I suppose he has a point but only insofar as since the US is the global hegemon at the moment, so I guess, technically, one does not seek to be what one already is.  Being a “hegemon” is synonymous to being the lone super power (i.e., having the largest economy and largest military in the world).  Of course, the notion that the US has not sought this power position is absurd, but:  see the post’s title.

In regards to #3:  When one talks of annihilation (something that a military super power like the US could, in fact, do to Iran) one ought to be a bit more circumspect.  It is one thing to be concerned about the power implications of another nuclear power in the world, let alone in the Middle East, but yet another to blithely call an entire nation of roughly 74 million people evil and crazy and to assert that they deserve eradication.  This is truly a morally reprehensible position.

In regards to #4:  The notion that “tanking” the US economy and potentially devastating the energy supply is just some “small factor” is stunning.

The combination effect of the above mnakes me wonder exactly who the true lunatic is here.

According to Jeffrey Goldberg, Carlson claims to have been “tongue tied” and actually opposed a war with Iran. I have watched the clip multiple times–I am having a hard time seeing where the alleged tongue-tie took place.