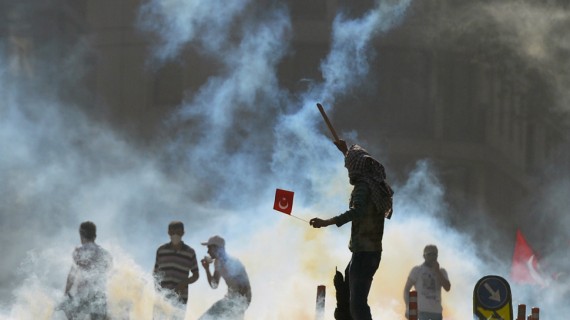 Protesters reacted to Prime Minister Erdogan’s decision to crack down on protesters in Istanbul by upping the ante:

Clashes between Turkish police and protesters have resumed in Istanbul’s Taksim Square, despite a warning from PM Recep Tayyip Erdogan that he would not show “any more tolerance”.

Protests began 12 days ago over the redevelopment of nearby Gezi Park.

The protests then widened, with demonstrators accusing Mr Erdogan’s government of becoming increasingly authoritarian and trying to impose conservative Islamic values on a secular state.

Officers responded by firing tear gas, but crowds still remain in the square.

“We will continue our measures in an unremitting manner, whether day or night, until marginal elements are cleared and the square is open to the people,” Mr Mutlu said in televised comments.

But he also said the action would “be conducted with care, in front of our people’s eyes, in front of televisions and under the eyes of social media, with caution and in accordance with the law”

CNN has been covering events in Taksim Square all day and its reports capture just some of the imagery that its camera are broadcasting:

The authorities’ tactics caused an ebb and flow of demonstrators from the Turkish city’s Taksim Square, with many of them moving onto the abutting Gezi Park.

Riot police surrounded a statue in the middle of the square starting around 10 p.m., even as fires burned around them, but there was little suggestion that the tension was over.

The protests were a continuation of demonstrations that first focused on the environment — opposition to a plan to build a mall at the park — but soon grew into a crusade against Prime Minister Recep Tayyip Erdogan’s democratically elected government. They have been going on for days in Istanbul and other cities around the country that bridges Europe and Asia, with the dramatics Tuesday signifying there’s no clear end in sight.

“There’s a spirit of determination (and) solidarity” inside Gezi Park, CNN’s Arwa Damon said Tuesday night from the park.

For days, Taksim Square has been a hub of activity by protesters decrying what they say is an increasingly authoritarian government.

Throughout Tuesday morning, smoke from tear gas and fireworks wafted through the air at the square as armored vehicles shoved away makeshift barriers set up by the demonstrators.

Several protesters linked arms to form a human chain and prevent the police advance. But when police deployed multiple canisters of tear gas, they scattered again.

“If you stop throwing rocks, we will not use tear gas,” the police told the raucous group over loudspeakers. “We don’t want you to get hurt; please obey.”

Protesters had built a new barrier earlier Tuesday and lobbed Molotov cocktails at armored vehicles, burning at least one of them. Police responded by spraying water cannons.

In a game of cat-and-mouse, the demonstrators, using wooden boards as shields, would pull back only to return, lobbing cocktails and firecrackers and flashing “victory” signs.

Things escalated Tuesday evening when riot police fired tear gas canisters toward the square, prompting tens of thousands to flee.Many of them sought refuge in Gezi Park, where Erdogan’s government had said they’d allow protesters to remain as long as they were peaceful. But Tuesday evening, as police shot tear gas canisters into Taksim Square, CNN’s Damon saw some canisters also go into the park.

Protesters didn’t stay away from Taksim Square for long. At one point, thousands packed back into it. Some surrounded a large bonfire they were fueling with whatever they could pick up, as deafening bangs — likely the result of stun grenades — added to the turmoil.

The images coming from Taksim Square now look eerily similar to the images we saw throughout the 2011 uprising in Egypt and the numberous standoffs between protesters and police in Tahrir Square in Cairo. Whether that is where these protests are headed or not is unclear, but it’s clear that this is no longer about a park and Erdogan’s redevelopment plans anymore. How far it goes will on numerous factors, including how the protesters proceed, whether more Turks decide join them, how Erdogan responds, and, because its Turkey, how the military decides to respond if at all. At the very least, I would think that these events guarantee that the protests won’t ending any time soon.