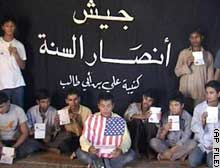 An Islamic Web site has posted gruesome still images and videos of what it says is the killing of 12 Nepalese hostages by a militant group in Iraq. Footage posted on Tuesday showed one beheading and 11 others apparently shot from an assault rifle at the back of the head. The video shows a masked man in desert camouflage apparently slitting the throat of a blindfolded man lying on the ground, The Associated Press reported. The blindfolded man moans and a shrill wheeze is heard, then the masked man displays the head to the camera before resting it on the decapitated body.

CNN is working to confirm the authenticity of the images. The still images appear to have been taken from the video. The Nepalese Foreign Ministry in Kathmandu said it had no official confirmation of what appears to have taken place.

“We have carried out the sentence of God against 12 Nepalese who came from their country to fight the Muslims and to serve the Jews and the Christians … believing in Buddha as their God,” said a statement on the site by Jaish Ansar al-Sunna. The claims came as another Islamic group held two French journalists hostage, threatening to kill them unless the government of France revokes a law banning Muslim children from wearing headscarves in public schools. The Web site statement vowed to keep fighting the Americans in Iraq. “America today has used all its force, as well as the help of others, to fight Islam under the so-called war on terror, which is nothing but a vicious crusade against Muslims,” the statement said. At the end of the four-minute video, a man reads another statement off-camera, vowing to fight the Iraqi government. “We will work on exterminating them until the last fighter,” he said.

Lovely. I guess killing people one at a time is losing its shock value.