A profile of George Mason economist and blogger Tyler Cowen offers this amusing description: "Cowen, 49, has round features, a hesitant posture, and an unconcerned haircut." 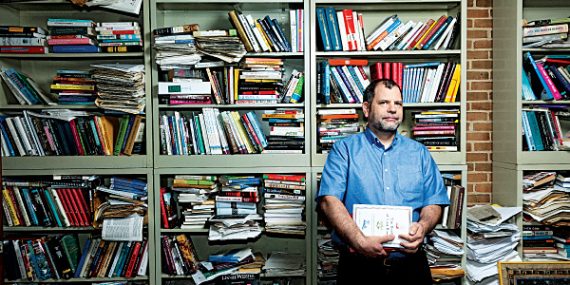 A profile of George Mason economist and blogger Tyler Cowen offers this amusing description: “Cowen, 49, has round features, a hesitant posture, and an unconcerned haircut.”

Cowen’s first rule of reading is as follows: You need not finish. He takes up books with great hope and no mercy, and when he is done—sometimes after five minutes—he abandons them in public, an act he calls a “liberation.”

It then gets down to the subject at hand: His book.

In January, Dutton published Cowen’s e-book, The Great Stagnation. It has shown up twice on the New York Times‘ e-book bestseller list. Dutton, a Penguin imprint, will release a hardcover edition on June 9. David Brooks has called it “the most debated nonfiction book so far this year” and leaned on it for a column in the Times. “In terms of framing the dialogue,” wrote Kelly Evans for the Wall Street Journal, “Tyler Cowen may well turn out to be this decade’s Thomas Friedman.” The year is young, but among wonks the book has reached that most coveted of states: It must be responded to.

In some circles, “this decade’s Thomas Friedman” is an insult. Certainly, Friedman draws sneers from many in the international relations scholarly community. But, like Cowen, he’s a brilliant popularizer. But Cowen, unlike Friedman, is a scholar, not a journalist, and he draws on theory and frameworks rather than anecdotes and insights gleaned from cabbies and barmaids.

The Great Stagnation runs through three centuries’ worth of what Cowen calls the “low-hanging fruit” of economic growth: free land, technological breakthroughs, and smart kids waiting to be educated. For developed economies, he argues, none of these remains to be plucked. Yet America, Europe, and Japan have built political and social institutions on the assumption of endless growth. Cowen summarizes the financial crisis in eight words: “We thought we were richer than we were.”

It’s not that he disagrees with any of the better-known explanations for the crisis—easy credit, flawed ratings—it’s that he sees a more fundamental problem, one that can’t be fixed with regulation, bailouts, or tax cuts. Cowen thinks that now that America has used up the frontier, educated all of the farm kids, and built a couple of cars for every family, we might be done growing for awhile. The Great Stagnation is a short work, simply written. It avoids any but the most basic discussion of economics, yet also brushes lightly over all of modern history; behind simplicity in style and argument lies a lifetime of intensely productive reading.

Tyler Cowen has read what’s listed in Harold Bloom’s The Western Canon, though not, he concedes, every single last one of the Icelandic sagas. He rereads what you probably haven’t heard of, like Anton Chekhov’s Sakhalin Island. For the Brazil trip, in case he runs out of new books, he has also brought Neal Stephenson’s 1,100-page Cryptonomicon, which he has already read. Fiction slows him down, he says, which makes packing easier. He carries a Kindle but reads paper when he can; he says he’s invested too much time on the rhythm of how the eye tracks the page. Several people have told me the same story about Cowen: They have watched him read, and he scans a page as others might scan a headline.

He does more than merely read books:

He has a PhD in economics from Harvard University and holds the Holbert C. Harris Chair of Economics at George Mason University in Fairfax, Va., where he’s taught since 1989. He runs the university’s Mercatus Center, a libertarian think tank, and has published 15 books and over 60 academic articles. In May the American Institute for Economic Research asked academic economists to name their favorite economists under 60. Cowen ranked 16th. Not shabby—he’s only five thinkers behind Ben Bernanke, the current chairman of the Federal Reserve.

Cowen is still best known for the blog he shares with Alex Tabarrok, Marginal Revolution. The same survey listed Cowen and Tabarrok’s blog as the second-most popular on economics. Greg Mankiw’s eponymous blog at Harvard just edged it out; both picked up far more votes than Paul Krugman’s New York Times blog Conscience of a Liberal, which ranked third, or Freakonomics, at fifth. That’s among economists. According to Compete.com, Marginal Revolution gets more unique visitors than any other blog in the AIER survey’s list, except for Krugman’s and Freakonomics, both hosted by the New York Times. Cowen and Tabarrok, who also teaches economics at George Mason, started the blog in 2003. There were few economics blogs at the time, and Cowen thought the two might have a comparative advantage; they had collaborated on papers since 1990, and have together published an introductory textbook on economics (as have two of the other top five economics bloggers).

He got an early start:

When Tyler Cowen was 15, he became the New Jersey Open Chess Champion, at the time the youngest ever. At around the same age, he began reading seriously in the social sciences; he preferred philosophy. By 16 he had reached a chess rating of 2350, which today would put him close to the top 100 in the U.S. Shortly thereafter he gave up chess and philosophy for the same reason: little stability and poor benefits.

He’d been reading economics, though. He figured that economists were supposed to publish, and by age 19 he had placed two papers in respected journals. As a PhD candidate at Harvard, he published in the Journal of Political Economy and the American Economic Review. “They were weird, strange pieces,” he says, “but still in good journals, top journals. That cemented my view that I could, you know, somehow fit in somewhere.”

Cowen speaks in short, declarative sentences that follow each other like steps in a proof. When the proof ends, he is not afraid of silence. In a man with straighter shoulders this might come off as overconfident, but Cowen also listens generously. He says “yes” like a Scandinavian, with a cautious intake of breath, as if to say that you are so often right that it would be rude to spend too much time on it. And he’s funny. In April, I sat in on a seminar he teaches on literature and law that puts 10 students at a conference table, each with a pile of books. (George Mason’s law school needed someone to teach the class, so he volunteered outside of his department.) Cowen got laughs, and not tentative chuckles either. He got class-stoppers out of Bartleby, the Scrivener and Edgar Allan Poe.

“I write books to solve problems for myself,” he says, “to figure things out. Things bug me, in a Lieutenant Columbo sort of way.” He began work on The Great Stagnation by wondering why growth rates for median wages were failing to keep up with either those for the highest earners or with gross domestic product. Economists on the left have called this trend “income inequality” and blamed it on policy; economists on the right have maintained either that it’s not a problem or that it’s being measured wrong and doesn’t exist in the first place. Cowen had been skeptical himself, but saw too many bits of evidence to ignore: sports salaries, data on executive compensation, the gulf between J.K. Rowling’s fortune and what other authors make.

Then the financial crisis happened. “For something so fundamental to have gone wrong,” he says, “my intuition and the evidence suggest that there’s something wrong with the real economy as well.” Maybe the two were related, he thought: What if the financial system took on so much debt because most of us assumed that growth was eternal? Cowen says he has no grand plans when he begins to write, just what he refers to as myopia. What looks strategic from the outside is just Cowen refusing to let something go.

And a theme I’m seeing a lot lately:

In 2004 a reader of his blog suggested to him in an e-mail that he might be autistic. Offended at first, he applied himself to understanding the term, then decided he has what he calls an “autistic cognitive style,” then wrote a book about it, Create Your Own Economy. (Cowen never sought a professional diagnosis.) He treats autism as he does the drug company cheerleaders, with neither pity nor celebration. It’s not that he denies that autism exists, rather he points out that there is some joy in obsession. He describes people with autism as “infovores” who are attracted to information—the minutiae of train schedules. Or books. He mourns the coming end of big-box bookstores and the enchantment he felt circling the new release table. He goes to the public library twice a week, chasing after serendipity. He has no algorithm for finding a book. If he is intrigued, he buys. “When economists look at what other people call pathologies,” he says, “they see reason, they see specialization, they see intent. They see a lot of pleasure.”

Cowen noted that most economists don’t read, at least not widely. Robert Frank agrees. Frank, who teaches economics at Cornell University, says the ascent to tenure leads young economists toward math and small questions. Universities hold on to only the leading figures in each academic sub-specialty. “You want to climb to the top of a hill,” says Frank, “and it’s a lot easier to climb to the top of a small hill than a big broad one.”

In some ways, Cowen has skipped a step in the normal path of the economist from academy to celebrity, which may explain why three notable economists contacted about Cowen declined to comment. There’s an idea among academic economists that the privilege of writing a narrative argument must be earned through the hard work of modeling and econometrics. “There is a view that what can’t be disproven isn’t science,” says Raghuram Rajan, a former director of research at the International Monetary Fund who now teaches at the University of Chicago Booth School of Business. He has published his own work for a general audience, most recently Fault Lines, on economic risks the financial crisis has yet to uncover. Rajan doesn’t think that narrative economics is any less difficult than writing models. “I don’t see your having to prove yourself before moving on to something that is ‘less rigorous,'” he says. “Both are hard. Both are important.” Tyler Cowen can do the math, but he works in narrative. “Economists talk of models,” he says. “Is a novel a model? What do you learn about society from novels? They’re false, but so are models.”

This has been a familiar theme in the last decade or so. Blogs and other “new media” have given platforms to people to build a reputation without jumping through the traditional hoops. A 20-year-old college student can start a blog or a Twitter account and make himself a nationally renowned pundit without first serving a decade working his way up drudge beats at a newspaper.