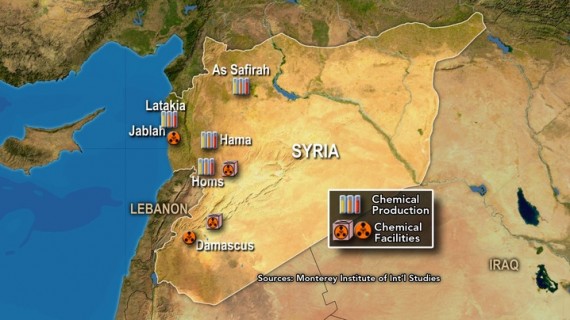 As the situation in Syria continues to deteriorate, the status of Syria’s chemical weapons has become a rather serious concern. In addition to the possibility that the Assad government would, despite previous pledges, use the weapons against the rebels or its own citizens, there’s also the risk that the weapons could fall into the wrong hands. Those “wrong hands” could end up being Hezbollah or some other terrorist group, the radical Islamists who have been using Libya as a base to cause chaos in nations like Mali, or Iran. That’s why it’s a little disconcerting to hear this:

The U.S. has lost track of some of Syria’s chemical weapons, Defense Secretary Leon Panetta said Friday, and does not know if any potentially lethal chemicals have fallen into the hands of Syrian rebels or Iranian forces inside the country.

“There has been intelligence that there have been some moves that have taken place. Where exactly that’s taken place, we don’t know.” Panetta said, in a Pentagon press briefing.

Panetta said that the “main sites” in Syria storing chemical weapons with which the Pentagon is most concerned remain secured by the Syrian military. But there is “some intelligence” that “limited” movements of weapons from other sites have occurred, he said, “for the Syrians to better secure what they – the chemicals.”

Panetta’s statement follows reporting that Syrian rebels claim to have taken control of a military base that contains chemical weapons.

“But with regards to the movement of some of this and whether or not they’ve been able to locate some of it,” he said of U.S. intelligence, “we just don’t know.”

Following the briefing, Pentagon officials sought to clarify the extent of their grasp on the status of Syria’s stockpiles. “We’ve never had perfect visibility into the Syrian chemical weapons stockpile, but we have excellent information that accounts for most of it,” said a senior defense offiical, speaking on background. “We’ve seen it move, and we’ve been able to make an assessment as to why it’s been moved. This is a highly distributed network of chemical weapons sites, and we have a good grasp of what’s going on inside that network.”

All this is happening as, as noted above, the rebels say that they’ve located some of the chemical weapons sites while a former Syrian military leader says the Iran is helping Syria with experiments into chemical weapons:

(CNN) – A series of videos uploaded to YouTube by Syrian activists suggests rebels are beginning to focus on where Bashar al-Assad’s regime stores its chemical weapons.

At the same time, a former senior officer in the Syrian Army who says he was chief of staff of chemical warfare has told CNN that Iranian technicians are helping with the regime’s research into chemical weapons. He also said they could be easily transferred by the regime to Hezbollah, the Lebanese militia organization that fought a border conflict with Israel in 2006.

The videos were first uploaded in July. Narrators using Google Earth satellite imagery describe in detail several sites where they allege that chemical weapons and missiles are stored or manufactured.

There is no way for CNN to independently verify what the videos purport to show.

Adnan Sillu, a former major general in the Syrian Army, told CNN Friday that moving the weapons would be easy for the regime should they be at risk of falling into the rebels’ hands.

“They are artillery shells and rockets that can be moved easily to Hezbollah,” he added.

But Sillu denied remarks attributed to him that he had attended a meeting before he defected, during which the possible use of chemical weapons was discussed.

Sillu said he had heard that Syrian and Iranian experts were doing joint research at the long-established chemical weapons facility at Al Safir near Aleppo, where there is a complex of tunnels and a base for Scud missiles.

“There are warehouses there,” he said, “used for experiments on poisonous grenades that contain sarin gas, tabun gas and mustard gas.”

As I’ve said before, the status of Syria’s chemical weapons is the 900lb gorilla in the room that nobody is talking about openly. As the rebellion rages on, one has to wonder if the Syrians will be tempted to transfer their weapons to Hezbollah or some other group if they’re under threat of being captured. Given that, the fact that we don’t know exactly where some of those weapons are is somewhat concerning to say the least.