The U.S. Army is sending more than three hundred CommanderÃ¢€™s Digital Assistant (CDA) hand held computers to Iraq with platoon leaders and company commanders later this year. This CDA is a new design, based on experience with CDAs sent to Iraq last year. The CDA is basically a militarized PDA (Personal Digital Assistant, like the Palm). PDA technology is changing so fast, especially by traditional military procurement standards, that the army expects to have a new version of the CDA every year or so. The 2005 model (shipping out later this year) will have satellite phone capability and be able to download maps, along with instructions overlayed on the maps. The army is taking advantage of cheaper, and more compact, memory available to provide this vital map download feature. ItÃ¢€™s now possible to equip a PDA with a gigabyte, or more, of flash (like used in digital cameras) memory. Most users are unaware of the fact that their cell phones, PDAs and iPods have all become, basically, hand held computers. All of these use the StrongArm or XScale CPU, a processor chip designed years ago for small devices, and continually updated (and now owned by Intel, which supplies over 80 percent of the CPUs for laptops and desktop computers.) Some PDAs, like the iPaqs, have long been considered handheld computers, using a PDA version of the Windows operating system and PDA versions of WORD and Excel. Even the iPod MP3 player has an operating system, display manager, database manager, hard drive hardware and software and digital sound hardware and software. 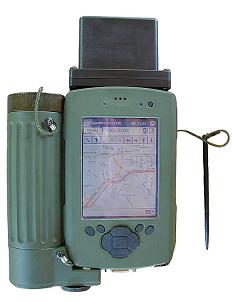 See StrategyPage for a larger image.

In the last year, PDAs and cell phones have been merging, which is where the new CDA came from. The army needs a combat PDA that can communicate, preferably via satellite, and can display visual information (like maps). The new CDA will do both, and their use in Iraq will provide a lot of feedback from officers about what software, hardware and graphics improvements are needed. The army is already concerned with battery usage, and getting the graphics to work just right, and be easy to use. The basic idea is to keep platoon leaders (and platoon sergeants, who will probably end up with CDAs as well) constantly informed about what their commanders want, and what new information is available about the enemy. With the satellite communications link, new information about the enemy situation can be constantly sent. Of course, the new CDAs will have the Ã¢€œBlue Force TrackerÃ¢€ technology that will constantly show the location of all nearby friendly platoons, tanks and combat aircraft on the PDA screen. Instead of, as in the past, the company commander trying to explain to his lieutenants, over the radio, what the new plan is, he just sketches out a new plan on his CDA, and transmits it to his platoon leaders (and the battalion commander, so his boss knows whatÃ¢€™s going on as well.) The young officers have taken to the new technology enthusiastically, as many have been taking their own personal PDAs into combat and training exercises for years. This is the Nintendo generation at war.

When I was in, we just had notepads and gigantic paper maps from which we had to personally construct giant folding map books. From what I can gather, the new way is better.