You may not be aware, but your local Starbucks is the new front in the 'War On Christmas.' 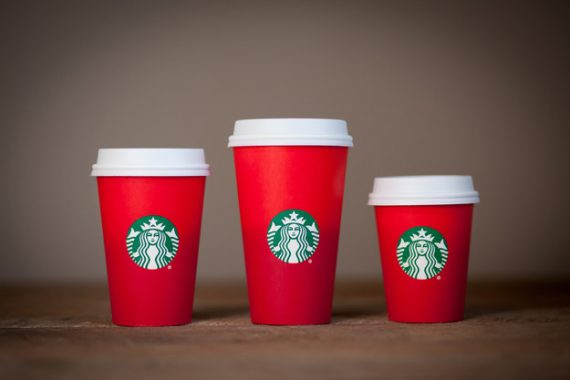 The 2015 holiday season has barely begun and the first shots in the War On Christmas have already been fired in the form of Starbucks coffee cups:

What is the issue, exactly?

In previous years, Starbucks’ iconic holiday cups, which the chain uses in lieu of white cups in November and December, featured wintry or Christmas-themed designs like snowflakes, ornaments and nature scenes. This year, the cups are more minimalist – a red ombre design that Jeffrey Fields, Starbucks’ vice president of design, said was meant to embrace “the simplicity and the quietness” of the holiday season.

This is a huge problem for some people, who feel that the plain red cups are oppressing Christians by insulting Christmas.

“This is a denial of historical reality and the great Christian heritage behind the American Dream that has so benefitted Starbucks,” Andrea Williams of the U.K.-based organization Christian Concern told Breitbart. “This also denies the hope of Jesus Christ and His story so powerfully at this time of year.”

To clarify, it’s not like the previous cups were decked out in crosses and mangers. It’s unclear why a drawing of a winking snowman or a dog sledding, for instance, is more “Christian” than a plain red and green (you know, Christmas colors) cup.

But either way, angry Starbucks patrons have a solution. Former pastor Joshua Feuerstein claimed in a viral Facebook video that he had “pranked” Starbucks by simply telling them his name was “Merry Christmas” — thus forcing the surely unimpressed barista to write the words “Merry Christmas” on the cup.

Feuerstein also noted that he brought a gun into the coffee shop, in spite of Starbucks CEO Howard Schultz’ request that patrons leave their firearms at home. Ho ho, good one!

In the video, Feuerstein encouraged people to similarly claim that their names are “Merry Christmas” and to use the hashtag #MerryChristmasStarbucks. Social media users have been expressing their support for the “prank,”

The 2015 version of the cups, which I first noticed in my local Starbucks on November 1st, can be seen in the photograph at the top of the post, and here’s what they looked like last year: 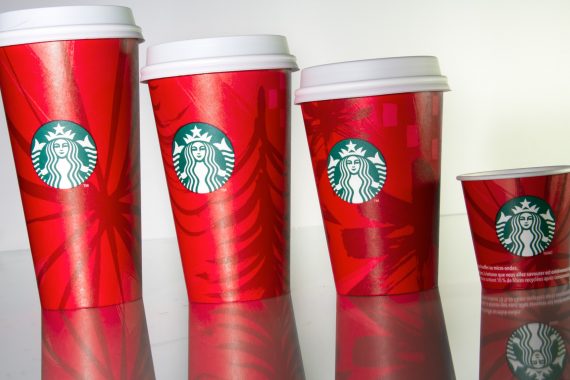 As you can see, the main difference between this year’s cup and last years, which is similar to designs used in the past is the fact that the cups are now plain red without designs depicting something reflecting a snowflake or a reindeer or some other generic symbol of the holiday season or just winter in general. None of these symbols, of course, have anything to do with the religious nature of Christmas, and Starbucks has apparently never used holiday cups that have designs that could even remotely considered religious. Considering the fact that the company caters to customers who are Christian, Jewish, Muslim, members of any of the other numbers of faiths that have found a home in the United States, atheist or agnostic, or simply people who don’t celebrate Christmas for personal reasons, it’s not surprising that they wouldn’t use explicitly religious symbols. Despite all of this, some group of people has decided that they’re going to be offended by coffee cups, because there’s nothing more important to worry about in the world today.

Not every Christian is going crazy over coffee cups, of course For example, Rev. Emily Heath of the United Church of Christ finds the entire thing utterly ridiculous:

Apparently people are mad that the seasonal cups at Starbucks this year are just plain red. No mention of Christmas or Jesus at all. And, clearly that means that Christians are being persecuted. I mean, my faith is just destroyed if I don’t get my Venti Blonde Roast with room for milk in a cup that features the name of my Lord and Savior.

So, obviously I think this is a little ridiculous. Because, Christians, I promise you that Starbucks red cups are not going to destroy the Christian faith. Seriously, the Roman Empire couldn’t do it, and they could kill you with lions. And I don’t think Starbucks has the death penalty. Yet.

But it’s even more ridiculous to me because of the timing this year. I’m kind of baffled because it’s early November. And it seems to me that people of faith, people who should be keenly aware of the grace God has given us, should be focused on the holiday that is coming up in just a few weeks: the one where we say “thank you, God”.

When Christians start to lose sight of gratitude and instead develop a major persecution complex then we have a huge faith crisis on our hands that is far bigger than whether the red cups at Starbucks make any reference to Jesus.

This year we didn’t even wait until Advent to start claiming persecution. We are joining the rest of the world in skipping right over Thanksgiving, and we are joining the Christmas rush. We are spoiling for a fight and those red cups are just the thing to give it to us.

We’re kind of like the religious equivalent those Black Friday shoppers who trample other Black Friday shoppers in order to get a good deal on a flat screen TV. We are so incensed by any perceived omission of our personal faith from the public sphere that we go on a rampage. Except instead of other shoppers, we just trample things like inclusivity, diversity, tolerance, and pluralism instead.

And you don’t get a TV in the end either. In fact, now you can’t even get a latte. (Not if you are boycotting Starbucks, anyway.) Really, all you get is the smug satisfaction of knowing that you are part of a dominant faith that can try to impose it’s religion on coffee drinkers everywhere.

Heath, of course, is absolutely correct and I doubt that the people expressing outrage over this alleged are actually as offended as they claim to be. Instead, what we’re seeing here is just this year’s first example of the “War On Christmas” nonsense that, thanks to Fox News Channel and other corners of conservative media, has become an annual tradition here in the United States. Jon Stewart had particular fun mocking this meme on The Daily Show over the years, with this perhaps being one of the better examples of that satire:

While this entire “War On Christmas” meme is obviously ridiculous, especially since if there is a “war” on Christmas it’s obvious that Christmas has one judging by the fact that the “holiday” season seems to start earlier and earlier every year, it is part of a larger phenomenon on the right that plays itself out on the political stage. To listen to the rhetoric of Republican candidates for President such as Ted Cruz, Mike Huckabee, Bobby Jindal, Rick Santorum and others, we are living in a country where the religious liberties of Christians are increasingly being attacked by things such as the legalization of same-sex marriage, the Obamacare birth control mandate, and laws barring discrimination in employment, housing, and public accommodations based on sexual orientation and gender identity. Additionally, you still here politicians from that wing of conservatism argue in favor of things such as prayer in public schools, giving “equal time” to discredited ideas like creationism in science classrooms, public subsidies for religious schools as part of school choice programs that are otherwise acceptable as long as tax money doesn’t go to religious instruction, and other issues where they claim religion is being removed from the public square. It is a persecution complex on their part that largely has no basis in reality of course, and the fact that at least some Christian Americans feel the need to start pointing at things like the fact that a store employee says “Happy Holidays” instead of “Merry Christmas,” or the design of a coffee cup just demonstrates how ridiculous it actually is. For many people, though, this persecution complex resonates as a political issue, and that’s why you see something like this become an issue, because it reinforces the false meme that a person’s faith is being attacked.