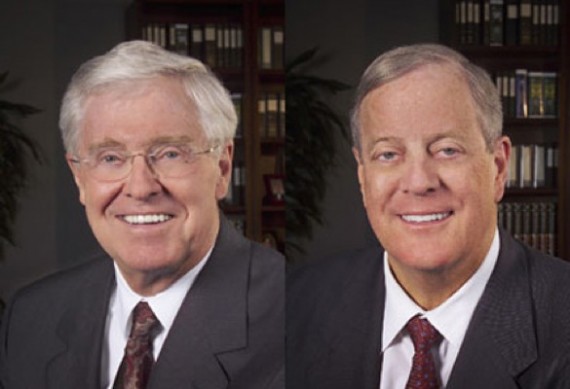 Via Reason comes this comment from a poster at Reddit about the left wing’s latest Public Enemy Number One:

The KOCH brothers must be stopped. They gave $40K to Scott Walker, the MAX allowed by state law. That’s small potatoes compared to the $100+ million they give to other organizations. These organizations will terrify you. If the anti-union thing weren’t enough, here are bigger and better reasons to stop the evil Kochs. They are trying to:

Who hates the police? Only the criminals using drugs, amirite? We need the Patriot Act to allow government to go through our emails and tap our phones to catch people who smoke marijuana and put them in prison. Oh, it’s also good for terrorists.

The Kochs basically give a TON of money (millions of dollars) to the CATO Institute. Scott Walker, $40K? HAH! These CATO people are the REAL problem. They want to end the War on Drugs. Insane, right? We know that the War on Drugs keeps us SAFE from Mexicans and keeps all that violence on their side of the fence. More than 30,000 Mexicans killed as of December! Thank God Mexican lives don’t count as human lives. Our government is doing a good, no, a great job protecting us and seriously, who cares about brown people or should I say non-people? HAHAHA! Public unions are good, government is good, and government protects us from drugs and brown people. The Kochs want to end all that. Look, as far back as 1989 CATO has been trying to decriminalize drugs. Don’t worry, nobody listens to them because they are INSANE.

CATO also rejects the Patriot Act. How can you hate the Patriot Act? Are you not American? They made it easy for you to understand by putting the word “Patriot” in the legislation. That means you should vote YES. Giving up our civil liberties is not a big deal. We need our government. Whether it’s Obama or Bush, we can all agree that the TSA is really good at what they do. God, those patdowns feel SOOOO good.

The Kochs also support Reason Foundation. You don’t know about that? Let me tell you. Basically, REASON Foundation is a bunch of cop haters. Last month, they did a “news” (as if we wanna know!) story on three cops that beat up an unarmed black kid. In the aftermath, the cops were suspended, sat around doing nothing and got paid (like that’s a bad thing!). I don’t know about you, but that puts a smile on my face for four reasons:

The Kochs are trying to end this. The Kochs must be stopped.

Gay marriage. YUCK. That’s just obvious. If the KOCH Brothers have their way, there will be homos getting married left and right. Here’s another scary thought: gays raising children.

If there’s one thing I know about billionaires, it’s that they only care about money. Bill Gates, Warren Buffett and George Soros. They aren’t fooling me. Bill Gates isn’t fooling me with his vaccination campaign in Africa. He’s just trying to make African children live longer so they will buy more copies of Windows. Wow. Not even trying to hide it.

Now, I don’t know why the KOCH brothers want gay people to have the right to marry. Everybody knows marriage is for a man and a woman. Even Obama believes that. Adam and Eve, not Adam and Steve amirite? I haven’t figured out the angle, yet. Maybe it’s like this:

I don’t know exactly how it would work, but we can all agree that they’re evil. Think about it. CATO and REASON are the only institutions OPENLY advocating these positions. Who would do such a thing? Have they no shame? Minority opinions MUST BE SILENCED.

Anyway, we must reject everything that the KOCH brothers do in Wisconsin and around the country. We will succeed as long as we stick to the GROUP-&-THINK.

YES WE CAN. You’re either with us or against us.

Incidentally, it’s seldom mentioned in the media but David Koch was a candidate for Vice-President on the Libertarian Party ticket in 1980.