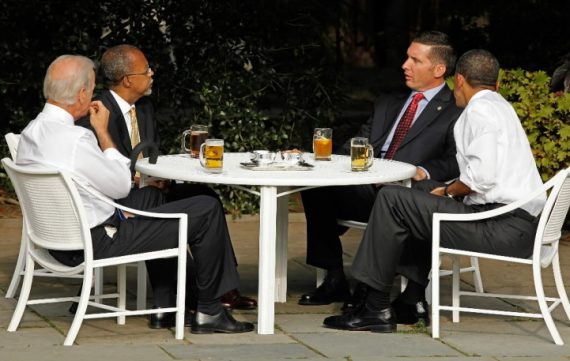 Several weeks ago, we learned that the White House was engaging in a little bit of homebrewing when President Obama brought some of it along on a campaign trip. After several requests, they’ve released the recipe:

Tapping into an outpouring of public interest, the White House on Saturday made its beer recipes public — giving hope to any Americans interested in having a hair of the first dog after joining the coalition of the swilling.

Sam Kass, White House Assistant Chef and the Senior Policy Advisor for the Healthy Food Initiative, decanted the recipes in an early-afternoon blog post entitled “Ale to the Chief” and brimming with boozy puns (“With public excitement about White House beer fermenting such a buzz, we decided we better hop to it”).

The White House went public a long time ago with its brewing operation — the first of its kind in the presidential mansion — but interest came to a head recently when it was revealed that President Barack Obama had brought some of the beers with him on a recent campaign swing through Iowa. Obama had several cold ones on that trip and supporters even rewarded him at one point with cries of “Four More Beers!” Perhaps intoxicated by the attention, press secretary Jay Carney told reporters that he had sampled the White House brew and declared it “superb.”

This version of reinstating the draft has proved quite popular, and with some undecided voters thought to favor the “who would I want to have a beer with?” test there could be an electoral dimension.

Here’s a video explaining what they’re doing at the White House.

And here are the recipes.