Melissa Clouthier asks, in light of a series of well-publicized boycotts and other kerfuffles surrounding this year’s Conservative Political Action Conference, “Should Libertarians Be Banned from CPAC?” While I’d differ a bit on the framing, I agree with her analysis and conclusion: CPAC is a place to discuss conservative ideas and build an agenda, so everyone who’s remotely part of the conservative coalition ought to be invited to the conversation.

But CPAC itself is something of an anachronism that few care about.  Frankly, the program itself has been tired and annoying for years.  I’ll go again this year, but mostly to see a handful of bloggers and others who I only see at CPAC. And because it’s nearby and I get blogger’s credentials for free.

The more interesting question is: Who’s a conservative?  Melissa discusses that issue at length and I’ll leave it to you to click through and read it.  I’ll use her Venn diagram, though, as a jumping off point: 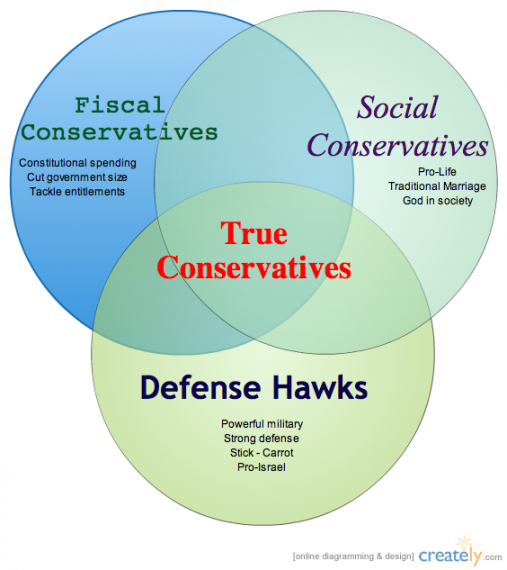 From the time that I first started to care about politics, as a 14-year-old during the Iran Hostage Crisis and the Reagan-Carter election, until just a few years ago, I’d have considered myself to fit within the True Conservatives inner circle.  Now, I’m much squishier at a time when the Republican Party, the vehicle for enacting conservative principles into public policy, has gone substantially more hard core.

This remains the pillar in which I’m by far the strongest. The United States government spends far too much money and accounts for too large a chunk of GDP. While I’m not an absolutist on the Intent of the Frames, I’d agree that large chunks of the budget go outside a reasonable interpretation of Federal authority.  And, certainly, entitlement spending is out of control.

But even here, I don’t worship at the alter of tax cuts. I prefer taxes low philosophically and economically and, in recent years, my ideology has begun to coincide with my interests. We’ve got to pay our way — an idea that used to be a fundamental precept of fiscal conservatism. And the Laffer Curve curves. There are diminishing returns to rate cuts.

I’d still consider myself a defense hawk under any reasonable measure.  I’m perfectly happy for my country to have the most powerful military on the planet and have no moral qualms about using military power to further our national interests when other tools fail us.

Then again, I’m not knee jerk. We could easily maintain superpower status on half the current defense budget. And I’m not a “national greatness conservative” who believes we should intervene anywhere and everywhere to spread democracy.

I’m not sure why “Pro-Israel” is under this category but I suspect I don’t qualify. I consider Israel our best ally in the region and want her to succeed. But I’m an American nationalist and think we should base our foreign policy entirely on our own interests. I happen to think a strong Israel and a strong Europe are in America’s interests. But, just as we will occasionally diverge from France in our calculations, we should make decisions in the Middle East in a holistic manner that will sometimes mean going against the will of the Likud Party.

I’m a Southerner by culture and grew up around and served in the military. So I’ve got a pretty strong social conservative streak.  But I’m also an atheist.  So, this is easily the weakest part of my conservatism.

Although I don’t come by it through religious precepts, I’m anti-abortion. But I’m squishy on the issue. Since my opposition to abortion doesn’t come from a belief in a soul or sin, I’m fairly agnostic about morning after pills and a firm believer in contraception. And, while I don’t like it, I’m not up in arms about very, very early term abortions.  And, while I’m not absolutely sure what I’d do if faced with the choice myself, I think people should make informed choices about high risk pregnancies and should have the right to abort a fetus that’s severely defective.

Then again, the law is all but settled on abortion, with the debate at the fringe of the margins. We’re not going to overturn Roe v. Wade if we elect Sarah Palin to two consecutive terms, followed by two more for Michelle Bachmann.

I’m in a reasonably traditional marriage, whatever that means these days.  My wife and I got married relatively late, but it’s the first marriage for both of us and neither of us had kids before getting married. I was anti-gay marriage — and, frankly, anti-gay in the way that you’d expect for a Southern former Army officer born in 1965 — until a few years ago.  But gays have gone from a bizarre theoretical to actual people for me. And, while I’m not marching in the streets demanding marriage equality, I can’t for the life of me come up with a reason why Adam and Steve shouldn’t be able to marry one another.

As an atheist, the “God in society” thing is very, very low on my agenda. I’m not a militant on the issue, and actually think the pendulum has swung too far in the direction of avoiding hurting the feelings of the non-Christian minority. But I do think we’ve got bigger fish to fry.

CPAC, the Tea Party, Libertarians, GOProud, and the GOP

As those who’ve read my blogging from the last few CPACs know, I find most of the speeches annoying, at best. Then again, I find most political speeches annoying.  The problem, for me, is that I’ve heard it all before. And most of the speeches aimed at True Believers are a combination of the standard red meat talking points and absurd characterizations of the other side. But, then, the target audience is the college kid who’s at his first CPAC and come all the way from Albuquerque, not a cynical, 45-year-old PhD who works in DC.

While the Conservative Movement isn’t the Republican Party and CPAC is neither of the two, the overlap is nonetheless high.  At CPAC 2008, Mitt Romney seemed to be the plurality choice, even though he’s by no means a True Conservative. CPAC 2010 cheered Scott Brown, who’s less conservative than I am, as a conquering hero.

I get that the “gay agenda” is antithetical to most conservatives. But the Log Cabin Republicans have been regulars at CPAC since I started going in 2004. (And probably before, but I have no knowledge.) So, I’m not sure what the big deal is with GOProud, unless it’s because their name makes them seem to be less unapologetic about their homosexuality.

The Tea Party movement makes me uncomfortable. But it’s not so much because I disagree with them ideologically but because they come across as uninformed yahoos.  Then again, I know plenty of people who are neither uniformed nor yahoos who consider themselves Tea Party people.  So, maybe, it’s just a matter of how populist movements come across on TV and the fact that a couple of leaders who I find incredibly unappealing, Palin and Bachmann, have glommed onto the movement and made themselves its national face.

I’m also not a huge Ron Paul fan. Although, again, it’s more a matter of his coming across as nutty than sharp ideological disagreement.  But I’m absolutely fine with the Paulites showing up at CPAC and trying to influence the debate.

The bottom line is that America is a two-party state and that means putting together large coalitions of people who don’t necessarily like one another or agree with one another in order to get things done.  And, while CPAC isn’t the Republican Party, the distinction is almost meaningless.  Most Republicans have considered themselves “conservatives” since the days of Ronald Reagan.  Even the so-called “Reagan Democrats” label themselves as “conservatives” nowadays, since they tend to be defense hawks and at least moderately conservative on the fiscal and social issues.