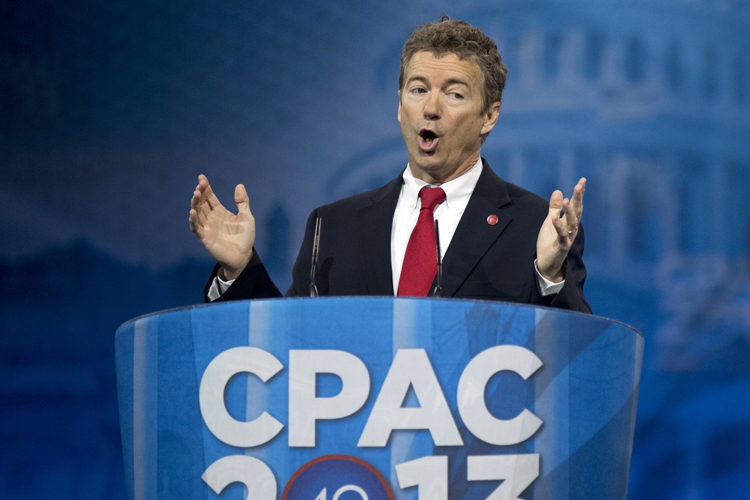 Rand Paul edged out Marco Rubio in the presidential straw poll at the Conservative Political Action Conference Saturday, reinforcing their standing as the preeminent favorites of the Republican base heading into 2016d

As the results were read to the crowd, Paul and Rubio both received large cheers and ovations. Trailing further behind: New Jersey Gov. Chris Christie finished fourth with 7 percent, then Rep. Paul Ryan (Wisc.) with 6 percent and Wisconsin Gov. Scott Walker with 5 percent.

Trailing them were Johns Hopkins neurosurgeon Ben Carson, Texas Sen. Ted Cruz, Louisiana Gov. Bobby Jindal and former Alaska Gov. Sarah Palin. The other 14 names on the straw ballot, and an additional 44 names written in, received a total of 14 percent.

Half of the votes cast in the straw poll came from attendees between the ages of 18 and 25, and two-thirds were men. The crowd was torn over the Republicans in Congress: only 54 percent approved of their performance.

For the record, it’s worth noting that only three  people  who won the CPAC straw poll have gone on to win the Republican nomination for President,  and only two of those have been elected President of the United States. That would be Ronald Reagan in 1980 and George W. Bush in 2000.

UPDATE (James Joyner): It’s worth noting for the record that the “meaningless” nature of the CPAC straw poll—and, indeed, straw polls, period—has been a recurring theme here for years; it’s not a specific reaction to Rand Paul’s victory. Here’s what I wrote a year ago (“Romney Wins CPAC Straw Poll (Again)“):

My position on the CPAC straw poll-and, indeed, straw polls in general-is that they’re an insipid waste of time yielding little to no useful insight. That remains true this time. CPAC, in particular, is not remotely representative of even the Republican primary electorate (it’s incredibly DC-centric and dominated by college students and activists in their 20s). And the vote is easily manipulable by organization. Ron Paul routinely does much better than his national numbers-and won the last two polls coming it to this year. (This year, he finished dead last, apparently having decided for whatever reason not to flood the convention with supporters.)

Bully for Ron Paul. But, at the end of the day, so what?

Wikipedia lists past winners of the CPAC Straw Poll:

I’ve taken the liberty of highlighting the winners who went on to garner the Republican nomination for president the next cycle. In fairness, we haven’t yet picked the 2012 nominee, so Mitt Romney or Ron Paul could theoretically pull it off. But the enthusiastic youngsters at CPAC have picked guys like Jack Kemp, Phil Gramm, Steve Forbes, Gary Bauer, Rudy Giuliani, and George Allen who not only didn’t get the nomination but whose presidential campaigns were utter jokes.

Mitt Romney withdrew from the 2008 race the first day of that year’s CPAC, recognizing that John McCain was the inevitable winner of the 2008 Republican nomination. By this point, Iowa, Wyoming, New Hampshire, Michigan, Nevada, South Carolina, Louisiana, Hawaii, Florida, and Maine had already voted — along with the 21 Super Tuesday states. Here’s how the CPAC Straw Poll came out:

Yes, the plurality winner was a candidate who’d just dropped out of the race!

The bottom line is that the CPAC Straw Poll is neither a predictor of success nor even a meaningful springboard. I suppose it’s better to win it than not — who doesn’t like winning? — but it’s totally meaningless. Indeed, while I’ve attended seven out of the last eight CPACs, I’ve not bothered to participate in the straw poll a single time.

And the year before that (“Ron Paul Wins CPAC Straw Poll“):

As I noted at the outset of  the conference, straw polls in general and the CPAC straw poll in particular are meaningless. Sam Brownback beat out John McCain in the 2007 straw poll and Romney beat McCain in 2008.   As some will recall, McCain nonetheless went on to secure the nomination.

In this case, we see that Ron Paul can get out a lot of students to a limited participation contest and so can Mitt Romney.  From Sarah Palin’s poor finish, we can see that you’re unlikely to do well in the straw poll if you don’t bother to attend the conference.

These three measures are equally valid bases for predicting the winner of the 2008 Republican nomination.

For example, if the contest is going to be decided by the number of college students that can be turned out with the promise of a free t-shirt and a pizza party, Brownback has a strong chance. If it’s based on a willingness to pretend that you read blogs, Romney is the definite frontrunner. And, if it’s based on being the only reason to give up a Saturday sitting around a cramped convention hotel surrounded by screaming teenagers, Gingrich can’t be discounted.

I’m going to go on record now: the results of the 2014 CPAC straw poll will be similarly meaningless. Ditto the 2016 Ames, Iowa straw poll. 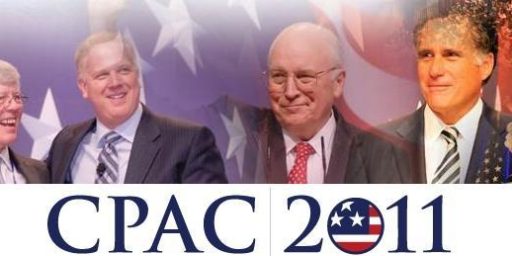