Another day, another poll.

Another day, another poll.  Friday night, IBD/TIPP released a poll showing Donald Trump leading the field by 5. Last night, NBC/WSJ showed Ben Carson up by 6. Aside from the fact that “outsiders” continue to dominate the competition, the real news is the sheer volatility of the poll numbers.

Here is the RealClearPolitics average over the last three months, the span since the first big debate of the cycle: 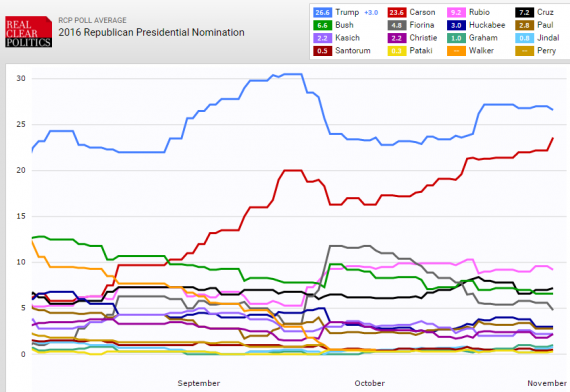 At first glance, there’s a remarkable consistency: Trump has dominated, Carson has been rising fast, and everyone else is far behind. But go back to points in the cycle and there are wild swings. Look at the lead changes over that period:

Since then, those three have held as the top three with fluctuation in their numbers and the competition among the also-rans has continued.

Scott Walker’s fall off the cliff is almost as interesting as Carson’s meteoric rise. Carly Fiorina, who vaulted herself from the kid’s table to the main debate after a solid debate performance and then flashed into a solid third place after a second fine showing, had a rather brief moment in the sun. She faded away for no apparent reason, having committed no obvious gaffes.

Rubio hasn’t so much risen as others have fallen off. He’s been no lower than 8.0 and no higher than 10.2 going back to mid September.

Bush hasn’t led any national poll since July 19, when Trump exploded into first place. But he’s been holding steady for the past two-and-a-half months.

It’s been pretty clearly a two-man race for first for the last two months. We’ll see if Trump’s crazy uncle at Thanksgiving and Carson’s low talker who knows nothing at all about national politics act wears thin between now and February 1, when the people of Iowa cast the first actual votes in the contest. My bet continues to be that they will, although this cycle is so unlike anything I’ve ever seen before that it defies prediction.