Would faith survive the discovery that the central premise of the Bible is a lie? 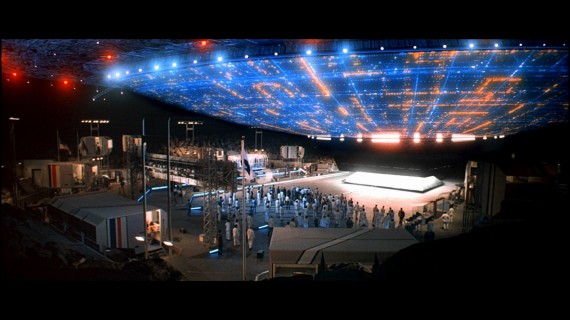 Via Andrew Sullivan, I was led to an interesting question posed by Mike Wall, who asks whether religion on Earth would suffer if we found definitive evidence of life on other planets:

The discovery of life beyond Earth would shake up our view of humanity’s place in the universe, but it probably wouldn’t seriously threaten organized religion, experts say.

Religious faith remains strong in much of the world despite scientific advances showing that Earth is not the center of the universe, and that our planet’s organisms were not created in their present form but rather evolved over billions of years. So it’s likely that religion would also weather any storms caused by the detection of E.T., researchers say.

First of all, let’s emphasize something I think is very important. Outside of the Abrahamic religions (Judaism, Christianity, and Islam), it’s unlikely that the discovery of life, intelligent or not, outside of Earth would have any significant impact on religious beliefs. Buddhism and Hinduism in particular seem to be two religious faiths that would be eminently adaptable to such a changed circumstance. So, in some sense, what we’re really talking about here is the impact that the discovery of extraterrestrial life would have on the religions that grew out of the Middle East starting some 6,000 years ago.

In some sense it might depend on what kind of discovery we’re talking about here. If evidence is found of microscopic life on Mars, or perhaps even fossilized evidence of more advanced forms of life that may have roamed the red planet at some point in the very distant past, that wouldn’t necessarily be perceived as something that threatens the core beliefs of any faith any more than the discovery of a new species of fish would. The matter becomes quite different, however, if we start talking about intelligent life similar to humanity, or even a form of life potentially more advanced than we are. Still, Wall argues that humanity would not abandon it’s religious beliefs quite so easily:

The Bible, Koran and other sacred texts of the world’s major religions stress God’s special concern for humanity and for Earth. So the discovery of aliens — microbes on Mars, say, or signals from an intelligent civilization in another solar system — might seem threatening, by implying that we and our planet aren’t all that special.

But our species has had plenty of time to get used to this idea. Nicolaus Copernicus made perhaps the first powerful case for it in 1543, when his seminal work “On the Revolutions of the Celestial Spheres” showed that Earth revolves around the sun, rather than the other way around.

“We haven’t been the center of the universe for a while now — four centuries,” said panelist Seth Shostak, a senior astronomer at the SETI Institute.

And recent alien planet discoveries continue to remind us of this fact. Scientists have already detected more than 700 planets beyond our solar system, and several thousand more await confirmation by follow-up observations. Some of these exoplanets are small and rocky, like Earth, and some orbit in their stars’ habitable zone, that just-right range of distances where liquid water could exist on the planet.

We also have a few historical test runs that shed light on how people might react if we ever do discover E.T., Shostak added.

In the early 20th century, for example, many people regarded the so-called ”canals” of Mars as strong evidence of an intelligent civilization on the Red Planet. And in the mid-1990s, scientists announced the discovery of possible microfossils in the Martian meteorite known as ALH 84001.

In neither case did the walls of churches, mosques and temples start to crumble.

“This experiment’s been run many times, and people never go nuts,” Shostak said. (The debate over ALH 84001 continues today, but most Mars scientists remain unconvinced that it contains strong indications of life.)

Dr. Ostrander is adamantly opposed to evolution, and yet he has no problem with the idea of there being extraterrestrials. He says it’s as if a couple has one child, and then they decide to have a second child. Is that second child any less special? So too if God decides to have life on our planet, and then another planet, and another planet. It doesn’t make us less special.

I tend to agree with Wall and the others. Religion has been a part of humanity in one form or another for tens of thousands of years at least. It started out as the belief that the sun, the moon, the stars, and the weather, were all controlled by gods to whom sacrifices must be made for good fortunate and evolved over time into the religious philosophies we know today. Throughout that entire time man’s thirst for knowledge has unlocked the secrets of nature, and to some extent, the universe to the point where someone like Stephen Hawking can say that it is possible to posit an entire theory explaining the creation of the universe that eliminates the need for a Supreme Being.

And yet religion, or at least religious faith, still survives.

I’ve been an atheist for at least twenty years now, but I’ve never considered myself very militant about, unlike the Richard Dawkins’ of the world. Absent them using the power of the state to force their belief upon me, I honestly don’t care if religious people continues to believe what they believe. For the most part, I’ve found people of faith to be about the same as any other human being, there are good people and there are bad people, but my general impression of most religious people is that they are just honestly trying to live a good life. I don’t try to change their minds, and they don’t try to change mine. And, I doubt that there’s much that could change their mind. If thousands of years of scientific knowledge isn’t going to cause people to reject the idea of the supernatural, does it really make sense to think that evidence of life beyond Earth will finally be the breaking point? I don’t think so.

This entire question reminds me of one of Arthur C. Clarke’s greatest short stories, The Star, which tells the story of a human interstellar expedition far in the future that includes among its crew a Jesuit Priest. In their travels the crew encounters the remnants of a long dead star system that once housed a civilization not unlike humanity. Eventually, the priest discovers that the systems star went supernova at a time that would have meant that its light reached Earth when Christ was born, thus leaving him to ponder the question of why this civilization had to be destroyed so that God could bring his revelation to humanity. You can read the whole story here. The point is, if an incident like that would not destroy religious faith, then I have to wonder if anything ever will.