The current Congress is on course to be the least productive in decades.

Philip Bump notes that the 113th Congress is on course to become historically unproductive:

With its August recess imminent and midterm elections following soon after, it’s regularly assumed that Congress is done for the year. And, therefore, the 113th Congress, barring a legislative miracle, will soon officially be the least productive ever.

Depending on what you mean by “productive,” that is. And if history is a guide, we’re only about halfway through the legislation the 113th Congress will produce.

The Post spoke by phone with Josh Tauberer, a transparency advocate and “civic hacker” who created GovTrack, a site that aggregates data on Congress and its legislation. Tauberer didn’t think there was much of a way that the 113th Congress could avoid seeing the lowest number of enacted laws in recent memory.

Here’s the chart that Bump created using the data: 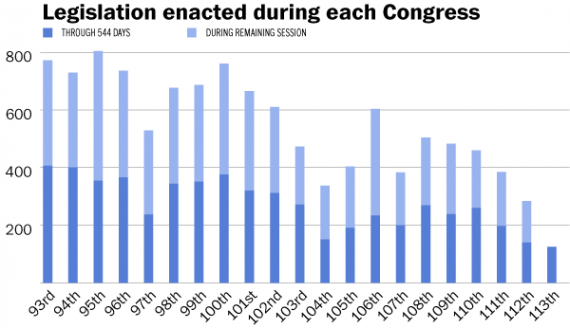 As the chart shows, much of the legislation that any Congress passes often happens in its waning days. There are several reasons for this, including the fact that some issues simply get pushed to the back of the agenda on a time-limited calendar. An added factor, of course, is the fact that Congress often uses the Lame Duck Session after an election to pass a host of bills that it otherwise might not have been able to pass previously. During Barack Obama’s Presidency, this is has happened with legislation that has extended the Bush Tax Cuts, ended Don’t Ask, Don’t Tell, and a whole host of other matters. Undoubtedly, the 113th Congress will have a similar session. However, it’s unlikely that they’ll be much more productive during that brief period than they have to date:

If you apply that average to the existing number of enacted laws from the 113th Congress, they’re on track to enact 251 laws in total — more than 10 percent fewer bills than the last Congress — which earned the distinction of enacting the least amount of legislation since 1973. For this Congress to not be the one to enact the fewest laws, it would need to pass 56 percent of its total legislation between now and the end of the year. Only once has that level been hit — in the Congress right before the 1994 Republican avalanche. (For what it’s worth, congresses that end in midterms are no more or less productive than those that end in presidential elections.)

My libertarian friends will point out that a Congress that doesn’t pass a lot of laws is not necessarily a bad thing, and this is a sentiment that I am sympathetic too. There are as many examples in the United States Code of bad laws, unnecessary laws, or laws motivated by passion, ignorance, or questionable motives as there are so-called “good laws,” perhaps more. Furthermore, it’s often hard to figure out what a “good” law actually is given the fact that much of the menace comes in the how the law is enforced by the faceless bureaucrats in the Executive Branch charged with doing so. Good intentions also don’t make a law “good,” because, of course, much wrong has been done in the name of good intentions. So, on some level, passing fewer laws is not, per se, a bad thing.

Since we’re living in an era of divided, and highly partisan, government, it’s easy to understand why the 113th Congress is on the course that it finds itself. In such an environment, it becomes much harder to get any legislation, much less “big” legislation like immigration or tax reform passed given the divide between the two parties. As the chart above shows, as a matter of fact, the last time in recent member that we had a similarly “unproductive” Congress was in the first session after the 1994 election, which was highlighted by a budget showdown between Congress and President Clinton that resulted in two government shutdowns, including one that lasted longer than the October 2013 shutdown.  By contrasts, eras when Congress and the Presidency were controlled by the same party tend to show, unsurprisingly, a more “productive” Congress. In some sense then, these statistics aren’t so much alarming as they are a natural consequence of the political world we find ourselves in.

All that being said, there is much to lament about Congressional inaction such as this. It means that basic functions that Congress is supposed to deal with on a routine basis, such as budgeting, end up getting delayed or dealt with on an emergency basis via Continuing Resolutions, thus making the kind of last minute showdowns that everyone seems to hate more likely. It also means that important issues like immigration reform, tax reform, and entitlement reform end up becoming political footballs rather than issues that Congress sits down and deals with like its supposed to. That’s not entirely the blame of divided government, of course, since we managed to deal with issues like that in previous eras when there was divided government. Instead, it’s a manifestation of the partisanship that has seemingly made nearly any effort at cross-party cooperation nearly impossible. While Congressional Republicans have certainly been adept at helping this along, Democrats have contributed to the problem as well, as manifested in the attitude that Senate Majority Leader Harry Reid has taken toward pretty much any piece of legislation origniating in the House. Instead of getting anything resembling serious considering, those bills end up getting ignored or tabled via a simple majority vote. As long as that exists, then Congress will continue to be unproductive and those important issues will continue to be nothing more than another tool that both parties use to raise money and excite the base. 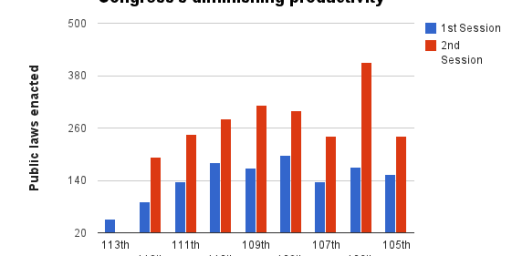