Today is the anniversary of a significant turning point in the Civil War. 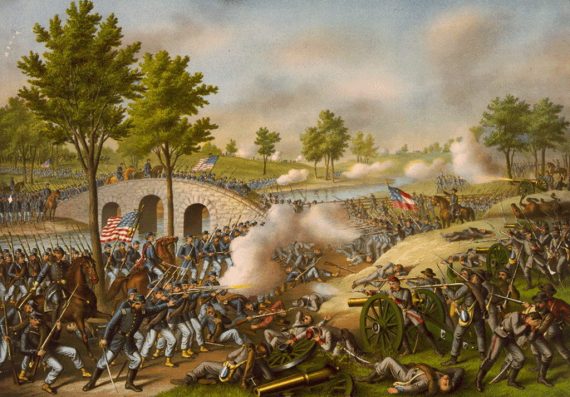 A century and a half ago today, the United States witnessed the bloodiest single day in its history:

On this morning 150 years ago, Union and Confederate troops clashed at the crossroads town of Sharpsburg, Md. The Battle of Antietam remains the bloodiest single day in American history.

The battle left 23,000 men killed or wounded in the fields, woods and dirt roads, and it changed the course of the Civil War.

It is called simply the Cornfield, and it was here, in the first light of dawn that Union troops — more than 1,000 — crept toward the Confederate lines. The stalks were at head level and shielded their movements.

Cannon fire opened the battle with puffs of white smoke rising from the tree line, at the precise spot where men re-enacting the battle are firing artillery today.

Just 200 yards in front of the Union forces, Confederate troops from Georgia were flat on their stomachs. They leveled their guns and waited, and when the Union troops broke out of the corn, the Georgians all rose up and fired.

“The smoke, the noise, the artillery is crashing in from all directions,” says Keith Snyder, a park ranger at Antietam. “It’s just a concentrated terror.”

It was complete chaos in and around the cornfield, Snyder says, with people screaming and bodies everywhere. In that first phase of the battle, 10,000 soldiers were killed and wounded.

There was nothing special about these fields, or even this town. It had no strategic value. Gen. Robert E. Lee’s plan was to push his troops north, perhaps to Pennsylvania, fight a decisive battle, and pressure Northern politicians to sue for peace. Union troops marched from Washington and intercepted Lee.

“The thing about Antietam is it’s a very personal battle,” Snyder says. “The vast majority of combat here is done at very close range — 100 yards and closer. It’s savage and personal. So when you pop out, the enemy is right there.”

The battle itself happened almost by accident. Several days earlier, a Union solider had found several cigars wrapped in a piece of paper abandoned at what had been a Confederate camp site. It turned out that the paper contained General Robert E. Lee’s Special Order No. 191, which contained specific details of the locations and strength of Lee’s forces and how they had been divided up after crossing the Potomac. The information essentially gave the Union the opportunity to deliver a crushing blow to the Army of Northern Virginia by catching by surprise near the Maryland village of Sharpsburg. For once, General George McClellan realized what he had and pursued Lee, although he foolishly held back a significant part of his forces, thus eventually depriving himself of the opportunity to deliver that crushing blow and allowing Lee to fight to a draw and retreat safely back to Virginia. McClellan’s failure to pursue Lee’s damaged forces despite having more than enough reserve force to take them on finally gave President Lincoln the excuse he needed to fire McClellan, who had frustrated him and much of official Washington since he took over command of Union forces a year before.

Despite the fact that it was not a clear victory, though, the Battle of Antietam was considered enough of a success for Abraham Lincoln to issue, some five days later, the Emancipation Proclamation, which would become effective on January 1, 1863. Lincoln had decided to draft the Proclamation in July 1862, in part to lend a new vigor to what had become a dispirited Union war effort and in part to appeal to those in Great Britain who abhored the South’s slavery in the hope that it would dissuade the British from openly backing the Confederacy. However, Lincoln knew he couldn’t do so until the Union had scored a convincing success on the battlefield, which was decidedly lacking in 1862. What happened at Antietam allowed him to do that, and changed the course of the war, and American history.

This wouldn’t be the last time that the Army of Northern Virginia would cross the Potomac, of course. Less than a year later Lee would do it again and make it as far as Gettysburg, Pennsylvania where he met General George Meade and the Army Of The Potomac and fought a three-day pitched battle that proved to be the high point for the Confederacy militarily. The 1862 crossing was more important, though, because it was being watched by England and France, who were still on the fence over whether or not to intervene in the American Civil War by lending support to the Confederacy and essentially forcing Lincoln to agree to peace terms that would keep the CSA intact. Lee’s failure to achieve a decisive victory, made European intervention far less likely. Then, when Lincoln announced the Emancipation Proclamation, it became politically impossible for both nations to step into the conflict on the side of Confederates due to public sentiment against slavery at home.

All of this leaves open, of course, one of the great “What Ifs?” of the Civil War. But for the discovery of Lee’s Special Order, Confederate forces likely would have been able to regroup and slip further north. A battle would have been fought somewhere, but it would have been on far different terms. It just goes to show you how history often turns on something as simple as one of Lee’s officers leaving behind three cigars wrapped in a copy of his order.