This is one of the most bizarre video games i’ve ever seen, and so of course it must be Japanese.

The object of the game appears simple, you have to jam a big plastic finger up someone’s rear end. Why? I have no idea. 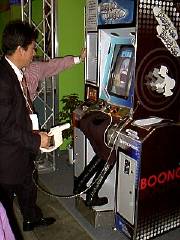 The only reason to clip the term limits out of the 22nd Amendment would be to allow Ronald Reagan on the ballot in 2004. Based on every resident of 1600 Pennsylvania since he packed up for the Left Coast, the man’s head and shoulders overqualified to take his mantle back. Nancy and Dick Cheney can take turns over who has their hand up his ass to make him talk, he could act all Presidential, and Colin Powell could go back to opening doors for our enemies to slip in and slash our throats in our sleep.

Hmmm. Well, if the Japanese can turn a television into a watch. . . .