Not surprisingly, Russia's acquisition of Crimea comes with quite a potential bonanza in natural resources.

There’s an interesting report in today’s New York Times that may reveal one of the reasons that Vladmir Putin moved so quickly to grab Crimea in the wake of the political crisis in Ukraine that led to the downfall of its President:

When Russia seized Crimea in March, it acquired not just the Crimean landmass but also a maritime zone more than three times its size with the rights to underwater resources potentially worth trillions of dollars.

Russia portrayed the takeover as reclamation of its rightful territory, drawing no attention to the oil and gas rush that had recently been heating up in the Black Sea. But the move also extended Russia’s maritime boundaries, quietly giving Russia dominion over vast oil and gas reserves while dealing a crippling blow to Ukraine’s hopes for energy independence.

Russia did so under an international accord that gives nations sovereignty over areas up to 230 miles from their shorelines. It had tried, unsuccessfully, to gain access to energy resources in the same territory in a pact with Ukraine less than two years earlier.

“It’s a big deal,” said Carol R. Saivetz, a Eurasian expert in the Security Studies Program of the Massachusetts Institute of Technology. “It deprives Ukraine of the possibility of developing these resources and gives them to Russia. It makes Ukraine more vulnerable to Russian pressure.”

Gilles Lericolais, the direcThetor of European and international affairs at France’s state oceanographic group, called Russia’s annexation of Crimea “so obvious” as a play for offshore riches.

In Moscow, a spokesman for President Vladimir V. Putin said there was “no connection” between the annexation and energy resources, adding that Russia did not even care about the oil and gas. “Compared to all the potential Russia has got, there was no interest there,” the spokesman, Dmitry Peskov, said Saturday.

Exxon Mobil, Royal Dutch Shell and other major oil companies have already explored the Black Sea, and some petroleum analysts say its potential may rival that of the North Sea. That rush, which began in the 1970s, lifted the economies of Britain, Norway and other European countries.

When Russia seized the Crimean Peninsula from Ukraine on March 18, it issued a treaty of annexation between the newly declared Republic of Crimea and the Russian Federation. Buried in the document — in Article 4, Section 3 — a single bland sentence said international law would govern the drawing of boundaries through the adjacent Black and Azov Seas.

Dr. Ryan estimates that the newly claimed maritime zone around Crimea added about 36,000 square miles to Russia’s existing holdings. The addition is more than three times the size of the Crimean landmass, and about the size of Maine.

At the time, few observers noted Russia’s annexation of Crimea in those terms. An exception was Romania, whose Black Sea zone had been adjacent to Ukraine’s before Russia stepped in.

“Romania and Russia will be neighbors,” Romania Libera, a newspaper in Bucharest, observed on March 24. The article’s headline said the new maritime border could become a “potential source of conflict.”

Many nations have challenged Russia’s seizing of Crimea and thus the legality of its Black and Azov Sea claims. But the Romanian newspaper quoted analysts as judging that the other countries bordering the Black Sea — Georgia, Turkey, Bulgaria and Romania — would tacitly recognize the annexation “in order to avoid an open conflict.”

These two maps, adapted from the graphics at the link, show the extent to which Russia’s underwater claims have been expanded since the acquisition of Crimea.

Here’s what the map looked like when Crimea was part of Ukraine: 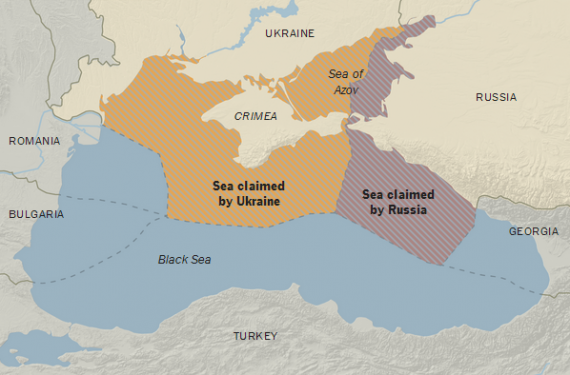 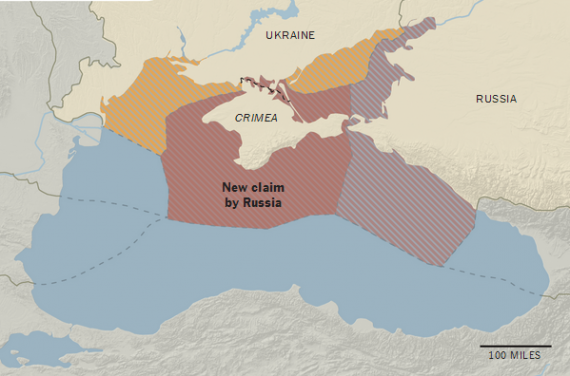 In addition to the fact that area that could be claimed by Ukraine has shrunk dramatically, a fact which makes one wonder why they didn’t try to fight harder to keep Crimea, the most notable thing about these maps is the extent to which Russia’s potential underwater claims have expanded. Indeed, looking at the second map, one sees potential motivation for the Russian mischief in Eastern Ukraine. After all, if some or all of that territory could be pried away from Ukrainian control then the claims in the sea of Azov could disappear along with it, and potentially appear under Russian control either via annexation or, more likely, treaty with some new sovereign entity controlling that portion of eastern Ukraine. Indeed, one might even go so far as to suggest that the ethnic ties that the Russians and their supporters in Crimea and eastern Ukraine have so skillfully exploited to build popular support, as well as resentment against the regime in Kiev, Europe and the United States, are little more than a smokescreen for operations that have a far more crass, monetary objective.

It’s no secret that the Russian economy was in modest shape at best even before the Crimean and Ukraine crises and the sanctions that have been imposed by the United States and other western countries. To the extent that the country has a source of hard currency it is via the sale of natural resources such as oil and natural gas. Those resources also give Moscow a certain amount of bargaining power with Europe given the extent to which the rest of the continent has found itself dependent, in varying degrees, on Russia as a supplier of energy. To the extent Russia has power, it’s because it has energy, so increasing it’s access to what many believe could be one of the biggest untapped undersea energy sources in the world would certainly seem to have a certain degree of logic.

This isn’t to suggest that access to energy is the only reason behind the moves that Russia has been making for the past three months, because certainly there are others as well. As many analysts have noted, the aggressive stance that Putin is taking toward Ukraine and in favor of Russian minorities in that country and elsewhere in Eastern Europe have been quite popular inside Russia itself, and it’s been suggested that Putin is motivated in no small part by a desire to distract the people from internal difficulties. Additionally, the power of the ethnic divisions that are being exploited here can’t be entirely dismissed as mere rhetoric. There weren’t tens of thousands of people in the streets of Donetsk because of access to natural gas in the Black Sea, for example. For better or worse, many of these people actually believe what they are being told and no doubt many of them really have no desire to be part of a multi-ethnic Ukraine. Those passions can’t simply be ignored. Hovering above all of that, though, there is this issue of natural resources, and it can’t be merely coincidental that Russia’s acquisition of Ukraine has vastly expanded its potential holdings. As one character on Star Trek: Deep Space Nine put it, I believe in coincidences, I just don’t trust coincidences, and this is just too coincidental.