Why was the ATF allowing thousands of weapons to be smuggled to Mexican drug gangs? 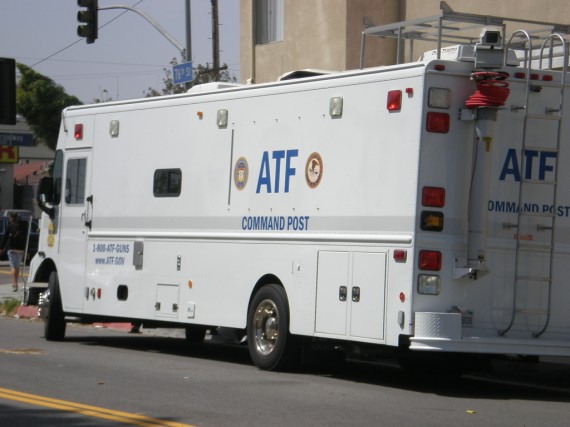 Just prior to the Labor Day holiday, the Acting Director of the Bureau of Alcohol, Tobacco, and Firearms was removed from the top spot at the agency over the fallout from a story that has been brewing over the summer, and which promises to bec0me the focus of a Congressional investigation in this fall:

Bureau of Alcohol, Tobacco, Firearms and Explosives Acting Director Kenneth Melson is being moved out of the top job at the bureau, ATF special agents in charge announced during an internal conference call today. He will transfer to the Justice Department and assume the position of senior advisor on forensic science, Office of Legal Programs.

The DOJ announced Melson will be replaced by the U.S. Attorney for Minnesota, Todd Jones.

“As a seasoned prosecutor and former military judge advocate, U.S. Attorney Jones is a demonstrated leader who brings a wealth of experience to this position,” said Attorney General Eric Holder.

Also, U.S. Attorney for Arizona Dennis Burke has submitted his resignation to President Obama, effective immediately. In an email sent to his staff Tuesday, Burke says his long tenure in public office has been intensely gratifying and intensely demanding.

Burke was interviewed by Congressional investigators behind closed doors on Aug. 18.

Sources tell CBS News that the Assistant U.S. Attorney in Phoenix, Emory Hurley, who worked under Burke and helped oversee the controversial case is also expected to be transferred out of the Criminal Division into the Civil Division. Justice Department officials provided no immediate comment or confirmation of that move.

The firings have their root in an BATF program called Project Gunnrunner, which began in 2006 as part of an agency effort to monitor the transfer of weapons to Mexican drug gangs. In 2009, however, someone had the idea to set up a sting operation, eventually dubbed Operation Fast & Furious, which essentially allowed illegal gun purchases in the United States to take place for the supposed purpose of tracking those guns into the hands of the drug gangs. As with many such operations, though, things didn’t exactly go as planned. ATF agents monitoring the border were told by supervisors to let known smugglers pass into Mexico, despite the fact that the agents knew they were transporting weapons. When an ATF Agent named Brian Terry was found dead along a known smuggling route in Arizona, assault rifles that had been illegally sold in the U.S. and tracked by the ATF were found at the scene. In addition to the Terry shooting, guns that the ATF knowingly allowed to slip into Mexico have been tied to the downing of a Mexican military helicopter, the murder of a well-known Mexican attorney who had spoken out against the drug gangs, and one of the ATF agents that blew the whistle on the operation was served with termination papers. On top of all this, when Members of Congress started to ask questions about the death of Agent Terry and the role that the ATF sting operation may have played in  it, the agency responded evasively and tried to deflect attention away from potential wrongdoing. Moreover, the three men responsible for putting the program together are still ATF employees and were recently transferred to administrative positions in what looks for all the world like a promotion, even though the ATF denies that is actually is.

The obvious question, of course, is how high up the chain of command knowledge of what was going on in Arizona went. President Obama has said that neither he nor the Attorney General had any knowledge of the operation, and that “we’ve got to find out how that happened.” At the same time, though, one ATF manage who testified before Congress earlier this summer said that he shared information about the operation with the White House:

At a lengthy hearing on ATF’s controversial gunwalking operation today, a key ATF manager told Congress he discussed the case with a White House National Security staffer as early as September 2010. The communications were between ATF Special Agent in Charge of the Phoenix office, Bill Newell, and White House National Security Director for North America Kevin O’Reilly. Newell said the two are longtime friends. The content of what Newell shared with O’Reilly is unclear and wasn’t fully explored at the hearing.

Congressional investigators obtained an email from Newell to O’Reilly in September of last year in which Newell began with the words: “you didn’t get this from me.”

“What does that mean,” one member of Congress asked Newell, ” ‘you didn’t get this from me?’ ”

“Obviously he was a friend of mine,” Newell replied, “and I shouldn’t have been sending that to him.”

Newell told Congress that O’Reilly had asked him for information.

“Why do you think he asked for that information,” Congressman Darrell Issa (R-CA) asked Newell.

“He was asking about the impact of Project Gunrunner to brief people in preparation for a trip to Mexico… what we were doing to combat firearms trafficking and other issues.”

While Project Gunrunner began during the Bush Administration, this operation is clearly the baby of the Obama Administration and the Holder Department of Justice. In fact, a significant part of its funding came from the Administration’s much-vaunted 2009 economic stimulus bill.

For the moment it appears for all the world like Burke is being treated as the sacrificial lamb by Justice in the hopes that his removal will satisfy the Republicans in Congress who have latched on to this story for understandable reasons. That’s unlikely to happen, though, as both Congressman Darrell Issa and Senator Chuck Grassley, who have been on top of this story for months now, have recently indicated an intent to expand the investigation notwithstanding the ATF’s personnel changes:

Sen. Chuck Grassley (R., Iowa) and Rep. Darrell Issa (R., Calif.) said they were expanding their probe into a troubled anti-gun-trafficking program, two days after the Justice Department announced a shake-up of officials who oversaw the program.

In a letter Thursday to Ann Scheel, the acting U.S. Attorney in Phoenix, Messrs. Grassley and Issa essentially put the Arizona district office on notice, saying its role “in the genesis and implementation of this case is striking.” They sought extensive documents – emails, memos, notes and the like – from six top officials, including Ms. Scheel and Dennis Burke, the former U.S. Attorney who was ousted in the shake-up. The lawmakers had signaled on Tuesday that their investigation would intensify

In their letter, Messrs. Grassley and Issa zeroed in on a court filing by the Phoenix office seeking to deny Mr. Terry’s family rights under the Crime Victims’ Rights Act, and expressed concerns about conflicts of interest in prosecuting the Terry case. “Since your office directed and approved the daily tactical decisions in Operation Fast and Furious, it is hard to avoid the perception that a conflict of interest exists,” the two wrote.

It seems clear that what we’ve got here, at the very least, is an example of gross incompetence on the part of the ATF. Whoever camp up with the idea of knowingly letting assault rifles and other weapons into the hands of known straw purchasers who then transferred them to Mexican drug gangs (by one estimate, over 2,500 straw purchases were permitted to go through by the ATF, with none of the guns being recovered), wasn’t really thinking too straight. Instead of uncovering U.S.-to-Mexico gunrunning, which agents were ordered not to halt when they did discover it, they allowed countless numbers of weapons to get into the hands of known violent criminal, much to the anger of Mexican politicians.

Some on the right have suggested that the entire operation was intended not to track gunrunning into Mexico, but to undermine the case for gun rights here in the United states. That seems far-fetched, however. Given the way these operations go, the old adage “Never attribute to malice that which is adequately explained by stupidity.” It’s far easier to believe that a bunch of people in the ATF and the Justice Department came up with a hare brained idea and then implemented in an incompetent manner than it is to believe that this is part of some insidious conspiracy to undermine the Second Amendment. Nonetheless, I have to agree with those on the right who argue that there are questions that need to be answered in connection with this story, not the least of them being:

It strikes me that these are all fairly simple questions, but it would appear that we’ll need to go through several months of investigations to find out the answer.

H/T: To @IrishSpy on Twitter and bmaz at Empty Wheel for pointing me to source material on this matter.