Andrew Cuomo To Replace Joe Biden As VP? Don’t Count On It

Will Joe Biden be on the podium with Barack Obama at the 2012 Democratic convention, or will there be a new running mate? 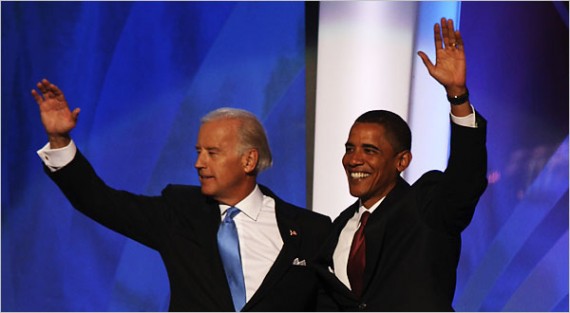 There’s already speculation that President Obama will have a new running mate when the 2012 General Election rolls around:

A Prominent Republican is joining a prominent Democrat in predicting that Gov. Cuomo will become PresidentObama’s running mate for vice president next year.

Former New York GOP boss William Powers, credited with playing a key role in electing Rudy Giuliani mayor and George Pataki governor, was effusive in his praise of Cuomo’s successes in the just-ended legislative session, and in his prediction of the freshman governor’s political future.

“Andrew had a fabulous session. It was fabulous. A property-tax cap, ethics reform and, for Democrats, gay marriage,” said Powers.

“I don’t think there’s any doubt Obama is going to pick him as his running mate. The president is in trouble and [Vice President Joseph] Biden doesn’t bring anything to his ticket.

“The president will call him up later this year and say, ‘Andrew, you have to do this for the good of the country.’ What’s Andrew going to say, ‘No?’ ”

Former San Francisco Mayor Willie Brown earlier this year also predicted that Obama would pick Cuomo to replace Biden, who he claimed would be named by the president to replace Secretary of State Hillary Rodham Clinton.

“He’s a big name, a big-state governor, and a Democrat who is taking on the issue of public-employee salaries and pensions. Plus, he looks good,” Brown said of Cuomo.

While noting first of all that neither Powers nor Brown are Obama Administration insiders, and Powers in particular is unlikely to have the Presidents best interests at heart, there really isn’t anything new about this type of speculation. As late as mere months before the 2004 Republican National Convention, there was speculation, which James Joyner took note of  here at OTB in two posts, that George W. Bush would dump Dick Cheney from the ticket in favor of someone like Rudy Giuliani or Condi Rice. Then and now, the reasoning behind the speculation was two-fold. First, there was the idea that Cheney would be a drag on the ticket, although his approval numbers had not yet reached the nadir they would near the end of the Bush Era. The second consideration was the idea that the President should select a running mate who could be an heir apparent in the next Presidential election. As early as 2004, everyone pretty much knew that Dick Cheney was not going to run for President in 2008 because of his health history, his age, and the fact that he was already becoming a lightening rod for Bush critics. Some in the GOP thought Bush should pick a VP for 2004 who could serve as his natural successor, for the good of the party. As it turned out, of course, if someone who had spent the previous four years as Bush’s Vice-President had tried to run for President in 2008, they likely would’ve gotten beaten as badly as McCain did, if not worse.

The reasoning appears to be as misplaced this time around as it was back then. Critics on the right see Biden as a gaffe machine who does nothing but embarrass the President, while some on the left seem to want to see the President anoint a success even before he’s re-elected in 2012. The response to the both points is that only Barack Obama is a judge of how Joe Biden is doing as Vice-President and, so far, he seems pleased with the choice he made. Despite generational differences, the two men seem to work well together, and, not withstanding his sometimes amusing verbal miscues, the Vice-President seems to be doing what the President wants him to do just fine. As long as that’s the case, and unless Biden tells Obama that he doesn’t wish to be renominated in 2012, Biden will stay on the ticket.

Of course, even if Biden volunteers to step down Obama might still ask him to stay, which is apparently what happened between Bush and Cheney in 2003:

[Bush’s memoir Decision Points] includes the revelation that the controversial Cheney had volunteered to step down in 2003 so Bush could pick someone else as his running mate for his 2004 reelection campaign.

Bush writes that he considered the offer, adding that although Cheney “helped with important parts of our base, he had become a lightning rod for criticism from the media and the left.”

Although Bush did not like Cheney’s image as described by critics, accepting his resignation offer would help “demonstrate that I was in charge,” he writes.

Bush said he talked to aides about asking Republican Sen. Bill Frist to run with him instead of Cheney, but ultimately stuck with Cheney because he valued his steady hand.

As I noted when this revelation came out, this is not surprising:

As the Bush/Cheney experience shows us, though, President’s select Vice-Presidents for reasons other than creating a successor that will follow in their electoral footsteps. In both Bush and Obama’s case, the selection of running mates was obviously influenced by the desire to have a name on the ticket with more experience, especially in the foreign policy area. That need would continue into a second term, of course, by which time a President and Vice-President will have developed a close working relationship that it would arguably be unwise to disrupt. So, just as Bush decided that keeping Cheney on the ticket was worth whatever electoral risks he was taking, Barack Obama is likely to decide that, despite his now famous gaffes, Joe Biden does more good than harm.

Franklin Roosevelt replaced Vice-Presidents twice. In 1940 when he replaced the conservative John Nance Garner (who had challenged him that year for the Demcoratic nomination with Henry Wallace) and then in 1944 when he replaced Wallace with Harry Truman when it was clear that succession would be an important issue and that Wallace was simply unacceptable as a possible future President.  Before that, it happened in 1864 when Lincoln replaced Hannibal Hamlin with Andrew Johnson, a pro-Union Democrat from Tennessee as part of a national unity ticket and in 1804 when Jefferson replaced Aaron Burr with George Clinton because, well, Burr and Jefferson hated each other (a decision whose wisdom was confirmed months before the election when Burr murdered Alexander Hamilton).

Since then, there’s been speculation about Vice-Presidential changes every time a President runs for re-election. Political advisers urged Eisenhower to dump Nixon in 1956. Similar advice was given to Nixon in 1972 and, by some conservatives apparently, to Reagan in 1984. They didn’t listen in those cases, and I doubt Obama will in this one. Barring some extreme change in circumstances, it will be Obama/Biden in 2012.

Note: The beginning of the second-to-last paragraph has been changed from the original to remedy an historical error noted by Tano notes in the comments.