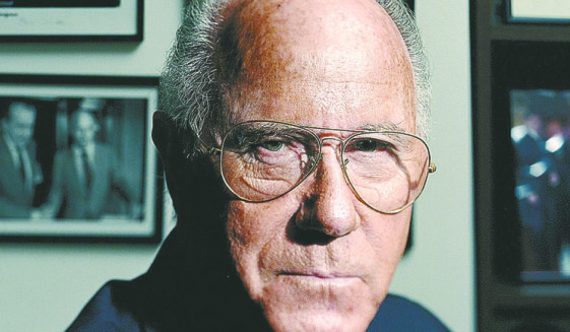 Arnaud de Borchgrave, who interviewed statesmen and despots across time zones and war zones as a swashbuckling foreign correspondent for Newsweek magazine, and who later led the Washington Times as editor during the newspaper’s early years, died Feb. 15 at a hospice in the District. He was 88.

The cause was cancer, said his wife, Alexandra Villard de Borchgrave.

Born a Belgian count, Mr. de Borchgrave was reported to have been 13th in line to the throne in his native country. He gave up his aristocratic title, although perhaps not the air of influence and access, and became a U.S. citizen and high-profile, globe-trotting journalist.

He began his career shortly after World War II as a reporter with the United Press wire service and quickly made the leap to Newsweek, then owned by Vincent Astor and later purchased by The Washington Post Co. under the leadership of President Philip L. Graham.

Mr. de Borchgrave became Newsweek’s Paris bureau chief in 1951 and went on to a career as a roving correspondent, parachuting into hot spots and sending dispatches from Africa, the Middle East and Europe at the height of the Cold War.

Ever flamboyant, he told Esquire magazine that he kept “the starched combat fatigues of 12 nations” at his pied-a-terre in Geneva, Switzerland, where he lived conveniently near the airport. By his estimate, he covered at least 17 wars.

His exploits — at times recounted as lore — made Mr. de Borchgrave the subject of news profiles that explored his cachet and reputation for extravagance. A self-described “sun worshiper,” he quipped that he was “lucky that most of the world’s crises have been in tropical climates.”

“People were always talking about ‘the tan’ and the way I went to the best parties. But black tie, white tie or combat fatigues, I was working,” he told the Chicago Tribune in 1985. “I’d come up with an excuse to go to the bathroom every 30 minutes at a party to make notes on what I’d been told.. . . Sure, there were pictures in fancy magazines with the Aga Khan on his yacht off Sardinia. But, my god, I was working!”

Newsweek rewarded Mr. de Borchgrave for what was, by all accounts, his prodigious output. “There were three reporting budgets: foreign, domestic and Arnaud,” a former correspondent once said, according to an account in the New Yorker magazine.

Arnaud de Borchgrave, a retired editor-in-chief of The Washington Times, a celebrated foreign correspondent who covered 17 wars and became the confidant of dozens of world leaders, died Sunday at a hospice in Washington after a lengthy battle with cancer. He was 88.

Mr. de Borchgrave was editor-in-chief of The Times from 1985 until he retired in 1991. He had been chief foreign correspondent for Newsweek magazine, a post he held for 25 years. He presided over The Times during a period of great growth, both in circulation and in influence at the White House and on Capitol Hill far beyond its circulation numbers.

“Arnaud was a giant of journalism,” Larry Beasley, president and CEO of The Times, said Sunday. “His globe-trotting reporting kept America informed, and his tireless work as our editor-in-chief helped put The Washington Times on the map in its early days.”

Osborn Elliot, onetime editor of Newsweek and later dean of the Columbia University journalism school, wrote that “de Borchgrave has played a role in world affairs known to no other journalist.”

Theodore H. White, whose “Making of the President” books set the standard for presidential campaign reporting, said that “Arnaud de Borchgrave is one of America’s great foreign correspondents, a man of immense wisdom, solid common sense and enormous sophistication.”

He pioneered conversations between heads of state, drawing them out on explosive international issues, beginning with interviews with President Gamal Abdel Nasser of Egypt and Prime Minister Golda Meir of Israel. He traded stories and sipped tea with Pham Van Dong in Hanoi and as a houseguest of King Hussein in Jordan.

“In a job that requires bluff and bravado,” Esquire magazine observed in a profile, “he has outrun the best of them.”

He received dozens of journalism prizes, including awards for best magazine reporting from abroad and a medal from the World Business Council. King Baudouin of Belgium awarded him the Order of Leopold II in 1990, and France awarded its Legion of Honor in 2014 to recognize “his personal contribution to the liberation of France during World War II.”

His colleagues marveled at his uses of intrigue and intuition.

“Arnaud was an extraordinary man,” said Wesley Pruden, who succeeded him as editor-in-chief of The Times and served until he in turn retired in 2008. “He came to us when we were struggling against considerable hostility to establish a second newspaper in Washington, and overnight he gave The Times identity, purpose and credibility. His friends teased Arnaud that he was ‘a legend in his own mind,’ but we were all in awe of his enormous self-confidence and his intrepid and relentless pursuit of the story. He leaves us a true legend in his own times.”

UPI (“Arnaud de Borchgrave, UPI editor at large, dies at 88“) collects many more reminiscences and tributes, including this from our mutual acquaintance Harlan Ullman:

He was, I would argue, one of America’s best, if not the best, columnist. His knowledge and understanding of foreign affairs and history, as well as his intimate involvement, were worth dozens of PhDs. His writing was brilliant, concise, often wicked in wit and prose and always on point. And his sense of humor was unmatched — even the gallows part of it. He once joked with me that his tombstone would read: “I knew this would happen.”

I had the privilege of getting to know de Borchgrave a bit in his later years (which is not to say that he knew me) as he was a frequent visitor to Atlantic Council events and others at foreign policy gatherings in town. He was indeed, well into his 80s, working. And a natty dresser:

Mr. de Borchgrave bemoaned the lack of sartorial style among many journalists, adding that good taste was a professional asset.

“I saw this in Morocco once,” he recalled in an oral history. “I had a Chesterfield coat with a black velvet collar. Looked like a diplomat. Nasser was coming in his yacht to Casablanca and getting together with all these Arab heads of state, and the media was dressed, as you know, how the media dresses. I was dressed like an ambassador. And I managed to get in with the ambassadors. I did that over and over again.”

After one luncheon a couple years back, perhaps at the offices of The National Interest, my then-colleague Shuja Nawaz introduced me to de Borchgrave, whom I’d actually previously met, incorrectly as a former Marine officer, to which he replied that I still looked like a Marine in mufti. I think he meant it as a compliment and, not wanting to embarrass either him or Shuja, didn’t correct the error (I’d been a soldier, not a Marine).