Epic flooding in Pakistan is a humanitarian crisis which dwarfs the combined devastation of the 2004 Asian tsunami, the earthquake in Pakistan in 2005, and the 2010 Haiti earthquake. Why aren't we paying attention? 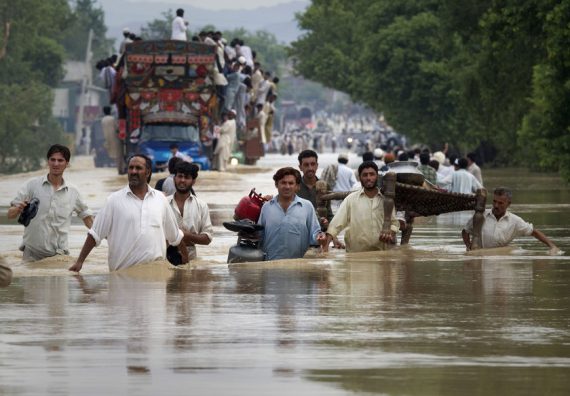 Jeb Koogler laments the woefully inadequate Western response to the floods in Pakistan.

With a humanitarian crisis in Pakistan which dwarfs the combined devastation of the 2004 Asian tsunami, the earthquake in Pakistan in 2005, and the 2010 Haiti earthquake, the lack of media attention that the flooding has received is surprising. Whereas the destruction wrought by the Haitian earthquake, for example, brought millions of dollars in donations as well as public campaigns by prominent American figures to raise money for Haiti’s reconstruction, the latest humanitarian crisis in Pakistan has brought little of the same sympathy or support. Western media outlets are barely covering the story, and donations — both by Western governments and by private citizens — have been far more meager than with past natural disasters of this scale.

The explanations for this include sympathy fatigue and the government’s double game which makes them simultaneously our enemy and our ally.  But we cared in 2005.  And it’s not Indonesia and Sri Lanka are our bosom buddies.

Even at OTB, where we had dozens of posts on the 2004 tsunami and its after-effects, we’ve only touched on the subject.  And, if the number of comments a post attracts is an indication of reader interest, it’s not a subject that’s exactly capturing the imagination.

My Atlantic Council colleague, Shuja Nawaz, has done yeoman work in calling attention to the enormity of this tragedy.   Below is an aggregation of the key articles and media appearances: