The United States has promised $150 million in aid to flood-ravaged Pakistan. Should we have? 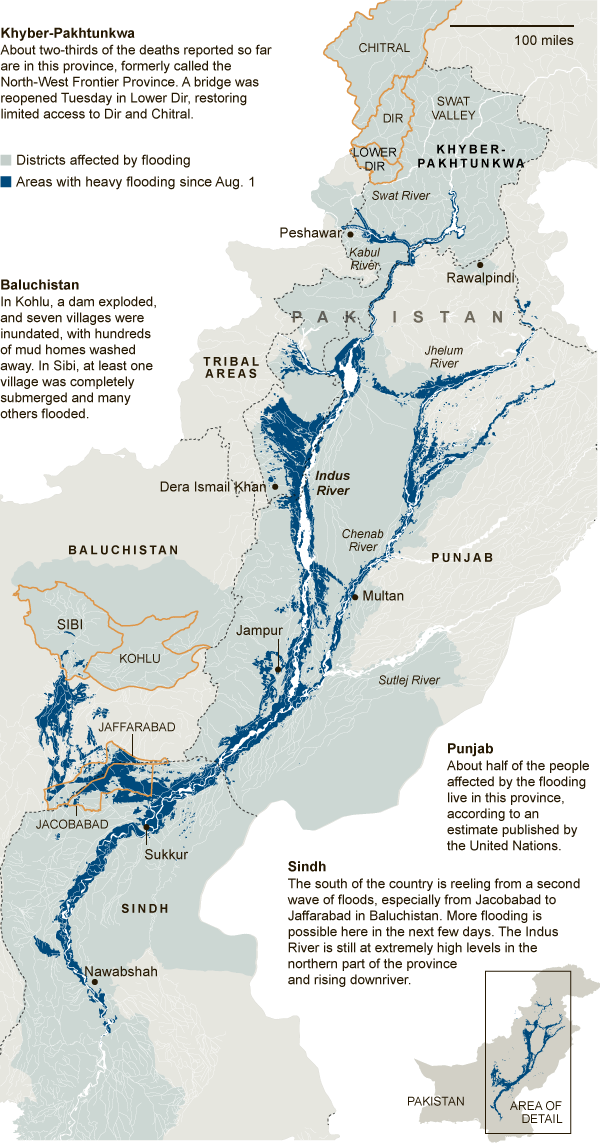 At the end of July monsoon rains struck Pakistan’s highlands and for the last two weeks the country’s streams and rivers have swollen as the flood waters make their way south. The Indus River is flooding five to eight miles beyond its normal banks. About a fifth of the country is threated by the flood. It is estimated that 20 million people have already been struck by the flood with 6 million people made homeless and 1,600 fatalities. The extent of the flood is illustrated in the map above (courtesy of the New York Times).

Now the flood waters are nearing the city of Hyderabad, a major city of 1.5 million people:

MULTAN, Pakistan — Surging waters are shifting flood damage southward in Pakistan, as the water level rises at one of the main flood barriers north of the city of Hyderabad, officials said Friday.

The next 2 days will be critical for the city’s 1.5 million people, but embankments strengthened over the last 10 days offer some protection, said an officer at the flood control room there, who gave his name as Major Ehsan. “We have done a lot of work, making sandbags and stone pitches to build up the embankments,” he said.

The U. S. has boosted its pledge of aid to $150 million from the $55 million in relief aid that had already been promised:

The United States government has increased aid to flood-ravaged Pakistan to $150 million, with Secretary of State Hillary Clinton pledging to help protect “as many people as possible” as the rain continues to fall.

The U.S. contribution helped the United Nations meet its target of close to a half-billion dollars in international assistance.

An illustration of the seriousness of the situation is that India has offered $5 million in aid and Pakistan has accepted, remarkable since not only are the two countries rivals (as the linked story avers) if anything that is an understatement.

I agree with the decision to assist Pakistan in dealing with the disaster which some are characterizing as the “worst the UN has ever faced”. However, I don’t think we should have any illusions about our reasons for rendering assistance. We should help Pakistan because it is the good and decent thing to do. However, it probably won’t make the United States any more popular in Pakistan and it won’t oppose the Afghan or Pakistani Taliban in Pakistan. That is what our experience to date has been.

In the aftermath of the 2005 earthquake U. S. Marine helicopters carried aid to Pakistanis, the United States gave more than $1 billion in aid to Pakistan, and for the better part of a year the U. S. Navy was the primary healthcare provider across an enormous swathe of the country. There’s a summary of aid rendered by the U. S. military here. The Washington Post suggested at the time that the aid would improve “the U. S. image” in Pakistan. Although the aid materialized the improvement in our image didn’t.

Moreover, as my friend Pundita observes, there is a great likelihood that relief aid will be diverted to fund the Afghan and Pakistani Taliban:

Monies diverted from aid and development projects are going in part to help fund the activities of Pakistani Taliban groups attacking not only Afghans but also NATO troops in Afghanistan. This has led to donor governments and aid organizations in NATO countries in effect helping to finance the murder and maiming of their own troops. The situation is an atrocity; it should be classified as a crime against humanity and those directly involved should be indicted as war criminals.

I am sure that aid organizations such as Oxfam and the International Red Cross would be outraged at being labeled war criminals, as would governments donating to Pakistan’s flood victims. But they are indeed war criminals if they don’t insure that the relief money they provide is not being diverted to Pakistan’s military. That’s because the military has a history of diverting financial assistance to warfare against India, nuclear weapons, and terrorism.

Her views on aid to Pakistan (of which I believe she has first-hand knowledge) are different from my mine but I think her warnings are sound. We need to ensure that whatever aid we give to Pakistan is used for its intended purpose. That’s hard enough within our own country let alone half a world away.