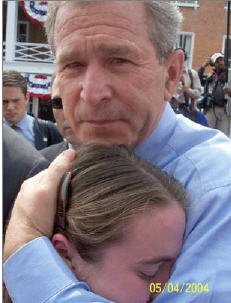 The most expensive TV ad buy of the presidential campaign shows President Bush (news – web sites) consoling a teenage girl whose mother died in the World Trade Center on Sept. 11. The ad, created by the conservative Progress for America Voter Fund, will run until the election on cable stations and in nine key states at a cost of $14.2 million, said the group’s president, Brian McCabe. (Related link: Ad analysis)

The ad was inspired by a photo of Bush hugging Ashley Faulkner, who is now 16, while campaigning in Lebanon, Ohio, on May 4. The photo, taken by the girl’s father, Lynn Faulkner, was widely circulated on the Internet. As Bush shook hands in the crowd, the Faulkners’ neighbor told him that Ashley had lost her mom on 9/11. Bush enfolded Ashley in his arms and offered her comfort. “In the midst of all those people and all that noise, it was an intimate and personal moment,” Lynn Faulkner, a marketing consultant and a Republican, said in an interview. His wife, Wendy Faulkner, an information-systems executive, was in the South Tower on Sept. 11. The ad features the photo and Ashley and her father talking about Bush. “All he wants to do is make sure I’m safe,” Ashley says in the ad. Lynn says in the ad that he saw in Bush “what I want to see in the heart and soul” of a president.

Progress for America Voter Fund’s eight previous ads have been a mix of attacks aimed at Sen. John Kerry and positive ads on Bush’s record. Its most widely seen ad, “Absolutely Incorrect,” shows Kerry saying he has never wavered on Iraq and highlights his comment that he voted for a bill to spend $87 billion in Afghanistan and Iraq before he voted against the final version of the bill. McCabe said his group has spent $24.8 million on TV ads, including “Ashley’s Story.” The new ad will be buttressed by a Web site, www.ashleysstory.com. E-mails, automated phone calls and 2.3 million brochures will go to voters. “Most political messages in October are harsh and negative,” McCabe said. “We’re going in the opposite direction to … highlight what everyone knows and likes about President Bush.”

Elizabeth Theiss-Morse, a political science professor at the University of Nebraska, said emotional ads like “Ashley’s Story” are effective. “One of Bush’s strengths is that he’s considered to be a warm person. Kerry isn’t,” she said. “This ad reminds voters about that. It also connects him to the 9/11 attacks and his actions right afterward. That’s another of his strengths.” And the ad could swing at least some undecided voters in Bush’s direction, Theiss-Morse said. “What matters most to a lot of people now is whether they can connect with the candidate,” she said.

(via Glenn Reynolds via PoliPundit)