Awful Presidential Cycle Likely to Get Much Worse

If you think this campaign has been awful, you ain't seen nothin' yet. 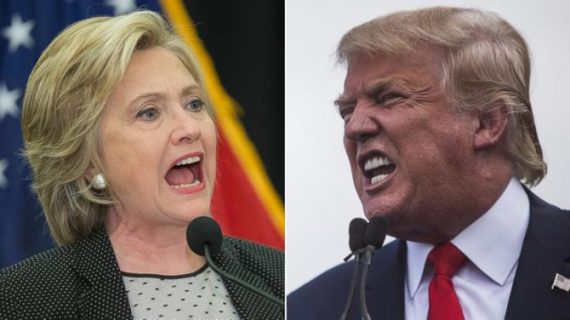 The 2016 primary contest is all but over, leaving the two least liked presidential nominees in memory.  We’re likely going to like them much less come Election Day.

Americans already hold extremely negative views of both candidates.  In addition to the already-referenced Reuters poll, the most recent surveys by reputable outfits show utter disdain for both.   CNN finds that Trump is viewed unfavorably by 57% of Americans, compared to 39% who view him favorably and 3% who have no opinion.

Trump and Clinton have both been national brands for more than a quarter century. CNN only shows numbers going back to 2011 for Trump but he’s been viewed far more negatively than positively in every poll in which the question has been asked, never having approval above 40% and never having disapproval below 55%; it’s been as high as 67%.)

Oddly, she and Trump both had their highest negatives a month ago and have bounced back considerably in the month since.

Despite Trump’s supposed appeal with blue collar voters, Clinton does better among those who earn less than $35,000 a year (53% to 38%), while Trump ties Clinton among those making more than $75,000. Trump does, however, do better than Clinton among the less educated, beating her 48% to 43% with those who have only a high school education.

Trump also faces an enormous gender gap with Clinton. While he gets more male votes than Clinton (45% to 43%), Clinton gets 51% of the female vote to Trump’s 36%.

Trump’s negative ratings are also sky-high, with 62% of the public saying they have an unfavorable view of the likely GOP nominee, while just 36% view him favorably. Far more independents dislike Trump than like him — 60% vs. 37%.

Hillary Clinton’s negatives are high, as well, but not as high as Trump’s. Forty-three percent view Clinton favorably compared with 56% who view her unfavorably. She gets identical low marks among independents, however.

Far fewer people have a “very unfavorable” opinion of Clinton than Trump — 40% to Trump’s 51% — and she scores much better among Democrats than Trump does among Republicans.

But Trump is emerging from a scathing primary fight where essentially the entire GOP establishment was trying to take him out, whereas Clinton has been fighting off a happy warrior taking her on from the left of her party. Things will get much worse once Trump starts attacking her in earnest. (More on that later.)

Writing for Reuters, Chris Kahn notes that people are unusually motivated by negative emotions than love of their own candidate this year.

Nearly half of American voters who support either Democrat Hillary Clinton or Republican Donald Trump for the White House said they will mainly be trying to block the other side from winning, according to a Reuters/Ipsos poll released Thursday.

The results reflect a deepening ideological divide in the United States, where people are becoming increasingly fearful of the opposing party, a feeling worsened by the likely matchup between the New York real estate tycoon and the former first lady, said Larry Sabato, director of the University of Virginia’s Center for Politics.

About 47 percent of Trump supporters said they backed him primarily because they don’t want Clinton to win. Another 43 percent said their primary motivation was a liking for Trump’s political positions, while 6 percent said they liked him personally.

But the negative atmosphere is likely to reign, says Alan Abramowitz, an Emory University professor who has studied the rise of negative partisanship in America.

Both campaigns probably will decide their best strategy is to work even harder to vilify each other, he said.

“It’s going to get very, very negative,” he added.

That would play into a longer-term trend.

A 2014 study by Pew Research Center found that Democrats and Republicans have shown increasingly negative views toward each other over the past few decades. In 2014 more than a quarter of Democrats, and more than a third of Republicans, viewed the opposition as “a threat to the nation’s well-being.”

That’s a sentiment that’s been brewing for a long time. In my own political memory, going back nearly four decades, it’s been getting steadily worse.

Granted, I was in diapers at the height of the culture clash that surrounded the latter days of Vietnam and the Civil Rights era. Even Watergate was before I was conscious about politics. Jimmy Carter and Ronald Reagan were certainly polarizing figures, caricatured and vilified by the other party. But there was never a sense that they didn’t have the legitimate right to govern. That sentiment pervaded Bill Clinton’s eight years in office and escalated during George W. Bush’s term, which was punctuated by both the controversial way the 2000 election was decided and the bitterness over the Iraq War. And the hostility has grown more intense still under Barack Obama, with a significant number of Americans questioning his very loyalty to the country.

Among those Americans, sadly, is the presumptive nominee of the Republican Party. Capitalizing on his media savvy and the anti-Washington sentiment that has fueled the Tea Party movement, he’s run the most vicious and tasteless campaign I’ve ever seen by a serious presidential candidate. Against fellow Republicans.  He’ll certainly be more brutal against Hillary Clinton, whose long career in the national spotlight would give even the most genteel candidate plenty of ammunition.

Clinton’s campaign has been much more above-the-fray, a function both of being a professional politician and having never been seriously threatened for the nomination. (Bernie Sanders’ campaign did far better than anyone, certainly including me, ever would have predicted. But he was able to present the illusion of being a serious contender only because of the flawed nature of the nomination system, which was far too dominated by unrepresentative caucus voting.) But she’s already shown that she’ll target Trump’s character—a very ripe target.

My strong sense is that Clinton will win the presidency, quite possibly by an Electoral College landslide. But this has been an incredibly unorthodox election year and I’ve been extremely bad at judging the zeitgeist. And Clinton is a woefully bad campaigner, lacking the ability to charm voters.

While the long-term impact of the race may be good for the country and the political system, the short-term impact will be awful.  The winner will likely be at 40% or lower in the approval ratings and have very little ability to rally public support for their governing agenda. And there’s next to no chance of reversing the poisonous atmosphere that has surrounded our national political scene the last quarter century.