The six Baltimore cops charged in the April death of Freddie Gray have been indicted by a Grand Jury. 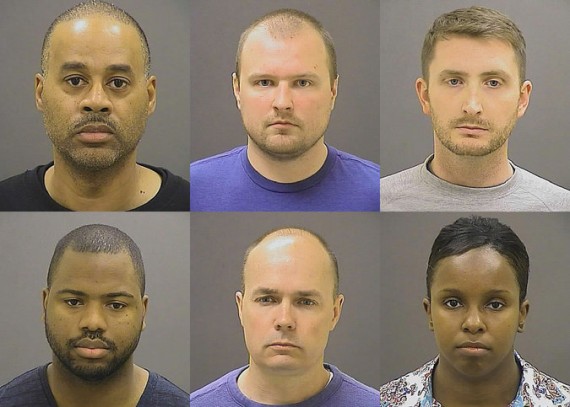 Late yesterday, the State’s Attorney for Baltimore announced that the six police officers involved in the April 9th death of Freddie Gray in police custody that set of protests and riots in the city had been indicted by a Grand Jury on a long list of charges, several of them more series than those they were originally charged with:

A grand jury in Baltimore has indicted six police officers on homicide and assault charges in the death of Freddie Gray, who was fatally injured last month in police custody, the city’s chief prosecutor said Thursday.

The charges announced by Marilyn J. Mosby, the state’s attorney for Baltimore City, do not differ greatly from those she initially filed against the officers. But getting a grand jury to agree and deliver an indictment is a milestone in a case that has generated national attention.

The case of Mr. Gray, 25 — who was arrested and injured on April 12 and died a week later — was one in a string of recent encounters around the country in which young black men have died at the hands of the police, prompting protests, arguments about the role of race in law enforcement and claims that police practices are deeply flawed.

Ms. Mosby made no comment on the indictment, except to say that it was normal for a list of charges to evolve along with a criminal case. She declined to take questions.

Lawyers for the six officers, who are free on bail, have called the prosecution’s case weak, filed for dismissal of the charges and argued that Ms. Mosby has conflicts of interest and should be removed from the case.

Mr. Gray was arrested after running from officers, who found a knife in his pocket that they said was illegal — Ms. Mosby later said it was not — and arrested him and called a police van to transport him. By the time the van delivered him to a police station, Mr. Gray had suffered catastrophic damage to his spine and was not breathing.

Officials have said the injury probably occurred during that ride.

In the indictment, as in the initial charges Ms. Mosby announced May 1, Officer Caesar R. Goodson Jr., who was driving the van, faces the most serious charge: second-degree “depraved heart” murder, which carries a penalty of up to 30 years in prison.

All six officers, including Officer Edward M. Nero and Officer Garrett E. Miller, still face second-degree assault charges, also punishable by up to 10 years, though some counts have been dropped. All six were indicted on a charge of reckless endangerment, a crime that was not included in the earlier charges, and misconduct in office, as well.

The Baltimore Sun lists each of the charges against the officers and how they differ from the charges that were originally announced at the beginning of the month. The most significant change is the fact that the charge of false imprisonment that had been listed against several of the officers has been dropped, and that each of the officers has had the additional charge of reckless endangerment added to the list of charges against them. Generally speaking, it isn’t all that unusual for there to be at least some difference between the charges initially filed against any criminal defendant and the charges that they are ultimately indicted on. Typically, this happens due to the fact that the process of presenting the case to the Grand Jury results in the discovery of new or additional evidence that changes the prosecutor’s perspective on the case and, sometimes, the choice is made to drop some lesser charges in favor of pursuing the more serious claims. In this particular case, as the Sun’s Ian Ducnan notes, the changes in the charges seem to reflect some of that as well as a shift in thinking on the part of the State’s Attorney:

The differences between indictments returned Thursday against six Baltimore Police officers in the death of Freddie Gray and the initial charges filed this month suggest prosecutors have refined their approach to the case, legal analysts say — or, possibly, that a grand jury balked at the some of the counts they had sought.

Baltimore lawyers who are not connected to the case say some of the changes could mean prosecutors are focusing less on Gray’s initial arrest — which State’s Attorney Marilyn J. Mosby said this month was unlawful — while others suggest prosecutors are trying to give themselves a backstop should any part of the case prove faulty.

When Mosby announced criminal charges against the six officers three weeks ago, she said possession of the knife was not illegal in Maryland, and police should not have arrested him.

After Thursday’s indictments, the major features of the case appear to be mostly the same.

But Lt. Brian Rice, and Officers Edward Nero and Garrett Miller, who were involved in the initial stop of Gray, are no longer accused of false imprisonment. That charge had struck many lawyers as unusual; police said it could leave officers worried that an error of judgment might lead to criminal charges.

What’s not clear is why that charge has disappeared. Kurt Nachtman, a former prosecutor in Baltimore, said it was likely the grand jurors did not find grounds to support it.

“You would think if the prosecution handpicked the charges they’d be the same across the board,” he said.

But Page Croyder, another former prosecutor, said it was possible that Mosby’s office decided the false imprisonment charge was a mistake and did not offer it to the grand jury as an option.

Another change: All the officers now face a charge of reckless endangerment, a misdemeanor with a maximum sentence of five years in prison.

Croyder said adding that count — probably a decision made by prosecutors, rather than the grand jurors — gives prosecutors a fallback charge at trial if they struggle to convince a jury of the weightier offenses.

She called reckless endangerment, which means a defendant did something to put someone seriously at risk, a “kitchen sink” charge.

“This is clearly a shift in strategy by the prosecutor’s office,” Croyder said. “Adding a charge of reckless endangerment tells me that there are issues about proving the more serious charges.”

For the most part, the news of the indictments is being greeted positively by activists in Baltimore who have continued their protests, albeit on a smaller and much more peaceful scale, even though the national media pretty much stopped covering this story after the officers were charged at the beginning of the month. Given the fact that the most serious charges against each of the officers survived the Grand Jury process this is, of course, not very surprising. At the same time, though, it seems fairly clear that situation in Baltimore isn’t going to be solved just because these officers have been indicted. The problems with the Baltimore Police that are at the root of what seems to have happened in the Freddie Gray case remain largely unsolved. The economic conditions in the worst parts of the city are, if anything, worse than they were before the protests started thanks to the fact that rioting resulted in the destruction of several local businesses. And, perhaps most significantly, the crime situation in Baltimore seems to have gotten worse in the six weeks or so since Freddie Gray died. Since that time, there has been an average of at least one murder per day, ever day. For the year as a whole, there have already been 100 murders and other violent crimes are also on the rise, while police seem to be arresting fewer people in what may or may not be a conscious slowdown by police officers in response to the charges in the Gray case.

As for this case in particular, it will proceed forward in the same manner that any other criminal case would. These officers are as entitled to the presumption of innocence as any other defendant, and it may well be the case that prosecution will be unable to prove all of the charges against them beyond a reasonable doubt. That’s something that will be up to the jury, of course, and we can’t even begin to speculate about the outcome of a trial until the evidence in the case beyond what is known in the press becomes public, and that may not happen until the trial itself. Until then, there will be several legal issues that will have to be dealt with. One or more of the officers, for example, may attempt to test the charges in a pre-trial hearing but, unless the prosecution is making some big mistakes here, it seems improbable that a judge would find that there is insufficient probable cause for the charges at issues. Additionally, it’s unclear at this point whether the officers will be tried together or separately, something that could have a significant impact on how that case proceeds, or if one or more of them decides to enter into a plea deal and testify against their fellow defendants. If that happens, it would likely be the two or three officers who have the least serious charges pending against them who will cut a deal. Finally, there will likely be a tough fight over venue given the public reaction to Gray’s death. Given Maryland’s demographic makeup overall, though, I’m not sure that the officers would have any more luck with a jury from outside of Baltimore than they would with one from inside the city itself. In any case, the charges and indictments themselves indicate that, at least in this case, the system is working they way it’s supposed to.

FILED UNDER: Crime, Law and the Courts, Police, Race and Politics, Baltimore