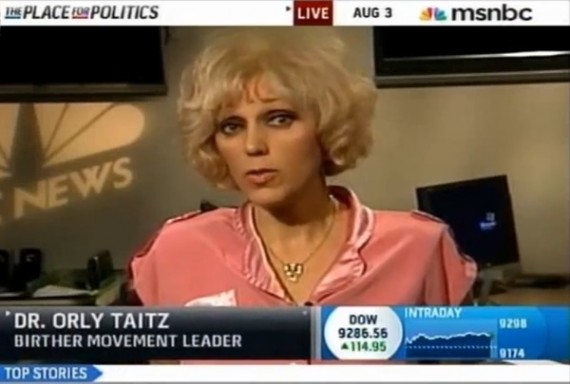 This will be the first year in which California’s new primary election system, which consists of a non-partisan primary that results in the top-two vote getters regardless of party facing off against each other in the November General Election. Dianne Feinstein is running for re-election and is guaranteed to be one of the two people to go on to the General Election, but the new process could mean that the most bizarre candidate possible ends up facing her:

Washington – A novel California primary that premieres Tuesday was intended to produce moderates, but in California’s U.S. Senate race, it could yield a challenger who claims President Obama was born in Kenya.

Incumbent Democratic Sen. Dianne Feinstein, 78, running for a fourth full term, faces 23 challengers, including 14 Republicans, the best known of whom is litigious Orange County “birther” Orly Taitz, a Russian Israeli emigre who has appeared on national television with her claims that Obama faked his birth certificate.

Polls taken by robocalls, including those commissioned by Taitz, show Feinstein with a wide lead, trailed by a strange assortment of single-digit rivals, in some cases led by Taitz.

Whoever finishes second Tuesday, from any party, wins the chance to take on Feinstein in November.

A second-place finish by Taitz would be seen in both parties as a national embarrassment for the Republican Party, rivaling the candidacy of Christine “I am not a witch” O’Donnell, the 2010 GOP Senate nominee in Delaware.

It’s hard to overstate just how bad that would be for the Golden State GOP.

An avowed birther activist and litigant, dentist, attorney, mother of three, and Moldovan immigrant who radiates instability could be the standard-bearer of the party of Reagan in the largest state in the nation. Is this a great country or what?

I’ve met Taitz, debating her on air once and spending an hour at her law office/dental practice in the hills of Rancho Santa Margarita while I was researching Wingnuts. She is not unintelligent and is almost charmingly insane, proudly showing off prominent alleged Facebook friends and then comparing Obama to Stalin, all while passing over hundreds of pages of Xeroxed documents she has sent to governors of all 50 states and the entire U.S. Senate. The packet details accusations including impersonation of a military officer, libel, defamation of character, harassment, breaking into the computer system of the Supreme Court, voter fraud, and forgery, concluding: “Verify the above facts brought forward by me and demand Obama/Soetoro’s immediate resignation or removal from office due to fraud and constitutional inability. National security and national survival depends on your expedient actions…”

In other words, nut-balls. Orly Taitz as a candidate for U.S. Senate would make Christine O’Donnell look like Henry Clay. She would make Sharron Angle look like Daniel Webster. Donald Trump seems a model of restraint by comparison.

As Avlon goes on to note, this is the same California Republican Party that once gave us, between the 1950s and the 1980s, two Presidents (one of whom also served as Vice-President and the other of whom was a popular two-term Governor), and a Chief Justice Of The United States (who was also a former Governor). And, now, Orly Taitz? Partly this is a sign that no serious Republican in California wanted to take on Feinstein because they knew it was a losing proposition. Even so, a Taitz victory today would be a tremendous embarrassment and I’m sure you’ll see every prominent national Republican distance themselves as fast as possible from the California Senate race.