The House GOP and the White House moved one step closer to a constitutional confrontation, but is it much ado about nothing? 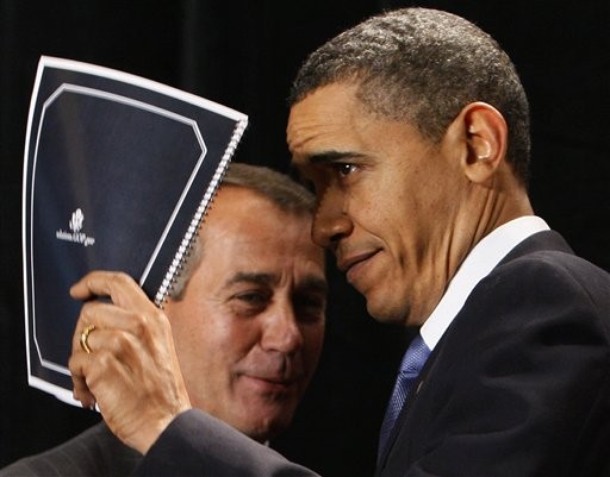 Speaker John Boehner has sent an unusually strong demand to the White House asking the President to provide the legal basis for America’s mission in Libya by Friday pursuant to the War Powers Act:

﻿﻿Stepping up a simmering constitutional conflict, House Speaker John A. Boehner warned President Obama on Tuesday that unless he gets authorization from Congress for his military deployment in Libya, he will be in violation of the War Powers Resolution.

In a letter sent Tuesday afternoon, Mr. Boehner, the top Republican in the constitutional chain of succession, said Mr. Obama must provide a clear justification for committing troops to Libya by Friday. Sunday marks the 90th day since the president notified Congress that U.S. troops had been committed to help enforce a no-fly zone over Libya, which is designed to protect the rebels fighting Col. Moammar Gadhafi’s government.

In a letter sent Tuesday afternoon, Mr. Boehner, the top Republican in the constitutional chain of succession, said Mr. Obama must provide a clear justification for committing troops to Libya by Friday, which marks the 90th day since the president committed U.S. troops, and the clock started ticking under the War Powers Resolution.

“The Constitution requires the president to ‘take care that the laws be faithfully executed,’ and one of those laws is the War Powers Resolution, which requires an approving action by Congress or withdrawal within 90 days from the notification of a military operation,” Mr. Boehner said in the letter.

The question is, what if the President refuses to comply, or doesn’t comply in a manner that satisfies the Republican House. The War Powers Act itself is Constitutionally questionable for several reasons, and Congress itself has largely ceded authority over foreign affairs that doesn’t directly involve declaring war to the Executive Branch. If the House GOP isn’t satisfied with the President’s response, what do they do next? Refuse to pass a defense bill as long as the Libya mission is on going? That won’t necessarily work politically. Pass legislation to try to stop the Libya mission? That will die in the Senate. Try to challenge the President in Court? It’s fairly well established that no Federal Court is going to take jurisdiction of a dispute like this.

This is a welcome debate, for sure, but I’m not sure how far the GOP is willing to take it, or whether they really mean it, especially when some Republicans are already calling for a new military mission in Syria. More importantly, though, I can’t help but think that this is entirely political, for the reasons James Joyner hit on earlier today:

Let’s face it, there’s a partisan aspect to all this. Candidates in the out party almost always criticize the wars started on a president’s watch. Had McCain been elected in 2008 and events otherwise unfolded as they have, we’d have gone into Libya much earlier and much harder. And all these folks-except, naturally, Ron Paul-would be cheerleading for it.

This is especially true with respect to Libya, where we saw Republicans spending a good part of February and March calling on the President to “do something” with regard to  the Gaddafi government’s crackdown against the rebels, such as establish a no-fly zone. Most of these calls were made without any regard for exactly who these rebels were or whether a no-fly zone would accomplish anything. Once action was taken, opposition to the Libyan mission suddenly became a Republican talking point. I can’t help but think that, for many in Congress, that has more to do with who the President than the wisdom of the policy. If John McCain were President, would these same people be speaking out against the military action that we know he inevitably would have taken (possibly more than a no-fly zone)?  Except for the Ron Paul’s of the world, the answer is clearly no.