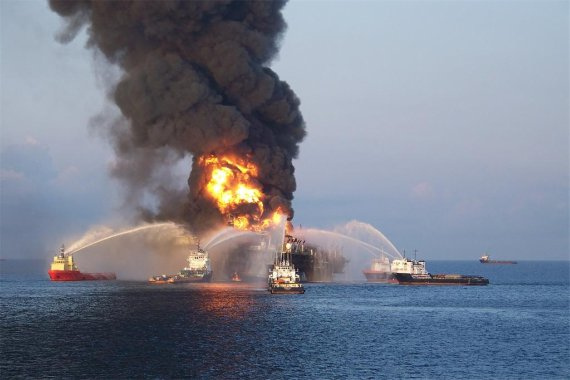 More than two years after an explosion at the Deepwater Horizon rig in the Gulf of Mexico, during which oil spilled into the Gulf of Mexico for nearly three months and caused severe environmental damage along the Gulf Coast, BP has reached a settlement with the Federal Government on the claims against it:

LONDON — BP, the British oil company, said Thursday it would pay $4.5 billion in fines and other payments to the United States government and plead guilty to 14 criminal charges in connection with the giant oil spill in the Gulf of Mexico two years ago.

The payments include a $4 billion fine to be paid over five years, with much of it to go to government environmental agencies, BP said in a statement.

As part of the settlement, BP pleaded guilty to 11 felony misconduct or neglect charges related to the deaths of 11 people in the Deepwater Horizon accident in 2010, which unleashed millions of barrels of oil into the gulf.

A law enforcement official familiar with the case also said that two BP employees would be charged with manslaughter in the case. The United States attorney general, Eric H. Holder Jr., was scheduled to hold a news conference in New Orleans later Thursday.

“Today’s agreement is consistent with BP’s position in the ongoing civil litigation that this was an accident resulting from multiple causes, involving multiple parties, as found by other official investigations,” the company said in a news release.

The company said earlier Thursday it was in advanced talks with the United States about settling all criminal claims stemming from the spill.

Even with a settlement on the criminal claims, BP would still be subject to other claims, including federal civil claims and claims for damages to natural resources.

BP repeatedly said it would like to reach a settlement with claimants if the terms were reasonable. The unresolved issue of the claims has been weighing on BP’s share price as the oil company has been under pressure from investors to move on from the disastrous oil spill that had hurt the company’s reputation and finances.

This is far from the end for BP, but a settlement of these charges may end up being the groundwork for settlement for the civil claims that the company still faces. Perhaps the most remarkable thing about this disaster though is that, by most accounts, the Gulf Coast has bounced back much faster than the estimates that the time were anticipating. So, at least there was some good news in all of this.